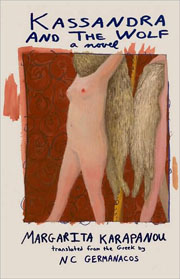 Born in 1946 and writing through the Greek and international upheavals that marked the following decades, Margarita Karapanou today remains a unique writer, though during her lifetime she was not alone in plumbing and picking at the definitions of novel and chapter, fiction and dream and character. In part this is due to her strong female voice, which will be heard loud and clear in these two new translations of her work.

Kassandra and the Wolf, for example, is a book about girlhood, reading like Angela Carter-meets-Judy Blume. A series of one-line- to a-few-pages-long “chapters,” Kassandra offers the narrator's observations, wishes, dreams, nightmares, daymares, thoughts, obsessions, pathologies—the reader never learns which (if any), or to what extent. Indicating both the mentality of a child and the nature of the subconscious, the topics jump without understandable transition from child abuse to Sunday church and dinner rituals to the repeated (and varied) suicide of Kassandra's uncle. At times the book could be a fairy tale—our young protagonist is very casually presented with both wolves and baskets of sweets—and at other times a parable, with many of its characters named simply by their profession or relationship to Kassandra.

Readers will be disturbed by the matter-of-factness with which young Kassandra talks about the multiple times men in her own household rape her, as well as the narrator's related obsession with “pipi” and “poopoo” and creepy attitude toward her often-absent mother. It's also difficult to read that Kassandra seems to like her premature sexuality, encouraging men sometimes through playful flirtation and physical advancement. Child Kassandra writes, “On Sundays, I become a child, filled with joys and beautiful thoughts; I brush my hair 100 times; I become good.” Certainly one would not think that, despite the narrator's words and actions, this sex is consensual and allowable, but by discussing this taboo and complex subject in a taboo and complex way, Karapanou gives a new strength to her female character.

While even adventurous readers may be uncomfortable with this book’s nonlinear telling and relentless lack of answers, readers will also be delighted by what grounds Kassandra and the Wolf: Karapanou's language. The word-pictures kaleidoscope—at times literally, as dinner becomes after-dinner games becomes Kassandra running down the stairs to demand of the housekeeper stories from the Greek Civil War—and at other times metaphorically (“A word like a snake stares at me: there's a pot like Grandmother's chamber pot, a mouth in the middle, and next to a nail scissors. . . . At the tail there's a ladder. I count the scribbles, examine them closely. I like this word.”) In still more places, Karapanou pulls off being both literal and metaphorical at once: “I'm alone again. I stick my tongue out vaguely at Miss Benbridge because she's driven away my friends and lovely pictures. I act the ape at her, the Chinaman, and then the frog. In a picture, I cover her in dung, turn her into a horsefly and a cockroach, and, finally, I turn her into a water glass, which I throw out of the window.”

And when the dark gets to be too much, sometimes—sometimes—Karapanou sheds some lightness, impossible to resist despite the ever-present crust and the reader's attempts to remain sober. The following is the odd, but also oddly cute, eleventh chapter: “One afternoon Zakoúlis came to play with me and Konstantínos. It was cold and he was wearing a coat with a hood. We said we'd play hide-and-seek. I lifted Zakoúlis up and locked him in the big cupboard, near the ceiling. Then we forgot about him and went to eat lemon creams. 3 days later, they finally found Zakoúlis. He was still wearing his hood, but he'd gotten to be very small, like an olive.” 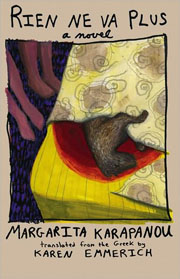 Rien ne va plus is, at first glance, a more traditional telling, of a marriage and of a woman in her marriage. Louisa is the narrator in all but the book's final “chapters”—as in Kassandra and the Wolf, they are really vignettes, though here there are more solid transitions between them—and she has an aunt and an uncle and a beloved dog named Lyn. She marries Alkiviadis, Alkis, who has purple eyes and works in the very definable profession of veterinarian. But Alkis's eyes turn out to be more shifting than originally assumed: “cold, the eyes of a fish” in the first version of his and Louisa's relationship, and “warm, friendly” in the next. Louisa begs for her fickle, cruel husband, and then she is the cold aggressor, leaving Alkis for a man who lives around the world and whom she knows only through letters, then for a giant, gregarious woman.

There are versions of this story because there are multiple versions of real marriages and people, too, and because, manifested as literature, the multiplicity of these relationships is downright fascinating to read. What is confusing, however, isRien's second part, a skinny prayer sandwiched between the book's other two much heartier sections. Who is praying—likely, but not assuredly, Louisa or Alkis—and if the prayer's recipient is God alone, or someone else as well, are not clarified. That may be frustrating but acceptable, an unfinished puzzle to languish over, but what is truly sad is that Karapanou's language becomes obtrusively coy here, with phrases like “The game starts again from the beginning. The end is always another beginning” and “Eros is diabolical.” Readers would understand the similarities and distinctions between the book's other parts without this hint in between. Perhaps the line that will really make readers wonder if Karapanou trusted us to read along is this: “My God, so distant and close: —If I come to hate you, it will mean I have finally begun to believe in You.”

In both Kassandra and Rien, Karapanou is at her best when her female characters are unrelentingly in charge—and also, one could argue, most out of control. It would certainly be worth reading more of Karapanou's books, as well as those of her Greek female contemporaries. Hers are horror stories wearing sparkling, precious jewels.