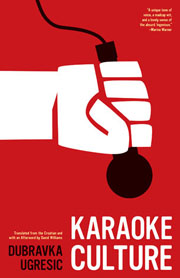 Considering the scope of references in this twelfth book and fifth collection of essays, the originally Croatian writer Dubravka Ugresic might well have come across Kurt Vonnegut’s dictum that a writer must above all be a good date—i.e. good company for a reader. She seems to believe it, anyway, though like the opinions she expresses on everything from the ramifications of digital culture to hotel furnishings to insects, she’s more complicated than that. In fact she’s less like a good date than like a good childhood friend who still lives nearby and drops in often, with urgent topics on her mind. Luckily what’s on Ugresic‘s mind is mostly new and engaging, especially for readers of this new American edition. But her strong presence—voice is really inadequate to her—in pieces that range from the hundred-page title essay to two-page reflections on a single observation, can cause some annoyance.

For example, readers might be put off by a confidential tone that assumes they’ll agree with her. A museum in her adoptive Netherlands displays only “exemplars of the worst kind of pretentiousness,” end of anecdote; she doesn’t even describe, let alone argue how so. Of atrocities she cites as indications of increasing worldwide chaos and immorality she’ll offer undocumented generalizations like “many Indians sell their organs” and assertions of scores of slave-labor networks in western Europe. For all her own insistence on calling what she sees as she sees it rather than as she’s been expected to by the chain of insistent authorities under whom she’s lived, from Tito to Croatian nationalists to organizers and patrons of the “literary festivals that [now] criss-cross the European continent,” she seems to be writing to a remarkably uncritical audience. And sometimes she’s just wrong, as in “literary magazines are so few as to be of no use. . .” (They might be useless, but they’re everywhere, no?).

Not that she doesn’t provide evidence, sometimes even to a fault. In the second-longest essay here, “A Question of Perspective,” she details her version of why she left Croatia, essentially to avoid what amounted intellectual bullying by other writers and academics in a nationalistic fervor after the break-up of Yugoslavia. As Phillip Lopate points out in his canonical Art of the Personal Essay, this form’s “enemy . . . is self-righteousness,” though it’s true that Ugresic’s blow-by-blow of escalating injustices and betrayals also limns a dynamic that’s one of her larger themes: the way systems that supplant others can perpetuate systemic evils.

That’s hardly a fresh insight, and even on less overtly political topics she sometimes relies on the trite sarcasm of a splenetic adolescent, often of the “Oh they think they’re so cool” variety, especially when it comes to cultural trends. Some of this effect might well be due to the nature of translation, though David Williams’ work is faultless in terms of clarity and readability. But as Ugresic herself says of a writer in the Croatian in which she wrote these essays, “I . . . recognize the nuances and tones. I catch the scent of every word . . . I know that every word . . . [and] every sentence . . . is just a new layer of powder on its owner’s face.” Her accusation is of hypocrisy, and while that’s not one of her own apparent faults, her prose might well have gotten similarly scrubbed down a bit somewhere along the line.

But her passions are intact, as we become increasingly aware. Besides hypocrisy, she’s against cruelty, greed, injustice, and exploitation; what she’s for, if doing is endorsing, includes curiosity and an indefatigable quest for truth. More than anything, this credentialed comp-lit academic turned self-described cultural critic hates what she interprets as having come about as a consequence of the downfall of Communism and the ascendancy of global business and technology over any political ideology at all: the particular kind of cultural boorishness she dubs “karaoke culture.” In brief, her coinage indicates an Internet- and YouTube-enabled assumption worldwide that everyone not only can make art, but should. “Author, Work, and Reader are the three elements that create a literary work,” she instructs us in a section of the title essay called “Karaoke Writing” that treats fan fiction, slash fiction, and the cell-phone novel that “has rocked the powerful Japanese multimedia industry”; “Author and Work have had their time, and now it’s the Reader’s turn.” And elsewhere: “We used to send out ghostly signals of our existence, and now we make fireworks out of our lives.”

The difference she perceives is that contemporary culture, whether global or locally (and transparently) manufactured by emerging systems and structures, is, in inverse proportion to its prevalence, empty. She illustrates with a hypothetical runner carrying a ceremonial porcelain bowl that turns out to contain “water soup,” and by citing actual offbeat museums (of Odd Socks, of Toilets) that upend the concept of preserving cultural traditions and excellence. It’s not a simple question of high versus low: though not by name, she cites Gehry’s Guggenheim in Bilbao. The containers become more important than the contents, she says, and mentions world-class violinist Joshua Bell, who can fill Carnegie Hall but was largely ignored when he played incognito in a subway station (viewable, ironically enough, on YouTube).

Her approach varies between academic vocabulary with full argumentation and the kind of visceral epiphanies drawn from casual observations you might expect over a back-yard fence. “In this private big brother show, this public big brother show, we record everything. . . [but] we don’t communicate.” In “Filipinas,” her one-dimensional revulsion at women in nightclubs seems moralistic and easily shocked, even prudish. For all her eschewing of ready-made concepts like loyalty to “homeland”—even that word makes her flesh crawl—she expresses an absolute allegiance to the poor. Her sensibility is a sort of “mash-up” (a technique of karaoke culture she criticizes) of Fran Leibowitz’s and Barbara Ehrenreich’s, with maybe a dash of David Foster Wallace’s, in her burrowing for the truth. Like all of them she can be insightful, though not always intentionally. She’s so conversant with current culture that she seems younger, but she admits she comes from the post-World War II generation in a then-Communist country, so she’s watched systems both political and cultural from inception to collapse.

She’s also lived in times and places where, “because of the written word, writers have lost their lives and been put to death.” That’s maybe her biggest difference from Americans, whether writers or readers. For those of us who grew up postmodern, whether ironic or post-ironic, it can take a George Saunders-like wit to awaken feeling, as in his 2005 GQ piece on Dubai, “The New Mecca”—rather than the memory of a world in which decency and justice were considered achievable social goals, toward which writing could help. For all her savvy perceptions, Ugresic writes as if out of nostalgia for those earnest beliefs, and for all her particular dislikes and closely considered evidence she admits to wandering, “dazed and confused, around [a] vanished system of coordinates. East and West definitely no longer exist. . . . the world has split into the rich, who enrich themselves globally, and the poor, who are impoverished locally.”

Borderless as her concerns are, hers is a perspective forged in the part of the world she knew first, and she has much to teach us about it, especially if you couldn’t quite follow Balkan events in the 1990s—as well as, in an extensive compendium in her own academic specialty, about regional Croatian literature that even two centuries ago was partially set elsewhere. Ugresic herself is too, of course, as a resident of Amsterdam now and a world traveler—her first collection of essays was written in New York City, and two pieces in Karaoke Culture address trips to the Philippines and Bali. But her real points of reference are Japanese films and those of the Coen brothers, Sinclair Lewis and Albanian novelist Ismail Kadare, Tito and Obama, Facebook and Twitter.

So by the end of Karaoke Culture you’ve developed a new respect for your childhood friend: she’s turned out to be as up-to-date as you are if not more so, speaking with traces of an intriguing, not-quite-identifiable accent you’d tuned out long ago. And you might wonder what else you’ve missed.