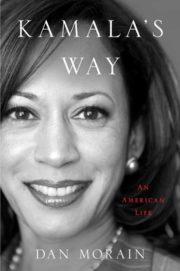 How did the daughter of two immigrants—her mother from India and her father from Jamaica—rise to become America’s first Black woman vice-president? She did it Kamala’s way.

Kamala’s Way: An American Life is a powerful biography of Kamala Harris, who, along with her younger sister, Maya, was raised in segregated California by a no-nonsense, cancer researcher single mother. Journalist Dan Morain has covered the state of California since November 1994 and watched her political ascent over those years, bringing first-hand knowledge of the events covered in this book.

Surprisingly, Morain writes that Harris’s classmates and friends remembered nothing about her early years that would have suggested she would one day become a district attorney, an attorney general, a senator, or a vice president. People who knew her in college said she was not a standout, and she did not graduate with academic honors.

Although political experiences are recorded in it, this is not really a book about politics. Instead, it is thoroughly about a woman with a talent for getting around closed doors. Harris quickly became the first Black female attorney general in California history, and was the youngest elected official in the role of United States Senator when she launched a bid for Presidential election in 2020. Her initial training as a prosecutor had unmistakably prepared her for her political journey.

The author honestly states that Harris has shown herself to be adept at not taking any stand when it is not politically necessary, revealing her understanding of one of the core truths about politics: whenever a politician takes a stand, they risk alienating someone. She is a shrewd strategist who is unafraid to play hardball in America’s sharp-elbowed politics and is also capable of pulling her punches when it benefits her.

Morain also analyzes her behind-the-scenes presidential campaign and her failure as a presidential candidate. By dropping out early, she saved herself from the embarrassment of losing impressively, which could have raised questions about her viability as a candidate in the years to come. It also allowed her to focus on securing her spot as Joe Biden’s running mate, an ultimately strategic move in her long-term career. Under normal circumstances, a politician might be criticized for seeking the limelight, but as Trump took over Washington, Harris rose above that. Her ability to come up with pithy sound bites, viral videos, and eye-catching headlines elevated her from being a bit player in the show to becoming a star.

Morain also offers insight about Harris’s existence when the cameras are gone. It might have been a big deal when she became a stepmother in an informal political family, but she did it, as she does everything, in a way that’s not sensational, whether she’s cooking for herself or going to the gym in a hoodie.

Though Morain’s book doesn’t offer much on the policy ideas that have resonated with Harris, he has penned a compelling story about her personally and the events surrounding her rise to political stardom. The resulting book is an inspirational and well-informed account of a bona fide trailblazer.