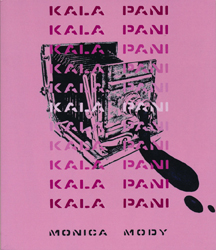 Monica Mody’s Kala Pani brings together theater, folklore, faux-journalism, the suspending enjambments of poetry, and the disruptions and connections of electronic media in a fascinating formal pastiche that creates an environment of “mythic static.” Titled ostensibly after a British colonial prison to which Indian political prisoners were exiled, this book stages “a remarkable feat of intervention” into our assumptions about self and other, the private and the public, narrative linearity and associational scope. Kala Pani also applies pressure on our assumptions about the “elemental & artificial.” The reader revolves antically between these as opposing modes of agency, struggling for balance as disingenuous narratives multiply.

Mody demonstrates how narrative patterning can confine and overdetermine meaning. Tellingly, the book begins with a frame that stumbles, trying to get its “vision straight.” The frame itself is located on a stage, and this is a central conceit of the book: our realities are staged and restaged. One layer further, Kala Pani presents six world travelers who strive to travel within story, but who suffer under the constraints of rational presidents, rigorous training, and official narratologists (“These stories offspun by our most popular minds that were certain, certain that you would have no better story to tell”). With great inventiveness, Mody wends narrative around and within narrative, as though the bonds and bounds of story could twist, Houdini-like, to effect their own escape.

Her featured players, narrated with brilliant inconsistency by the world travelers, are “Sameshape” and “Othershape.” Any account of the relation of these two (sisters? lovers? performers in a Bollywood production?) is likely to unfurl into blatant contradiction. Is Sameshape a baseline by which any difference in Othershape can be manifested? It’s impossible to say. In any case, Sameshape and Othershape eventually become part of the audience. A long sequence that has the two reciting names and nouns back and forth to each other devolves into a kind of burlesque nonsense: the would-be protagonists tease the audience with names that don’t attach to any identity.

As witty and lightfooted as this book is, the shapeshifting characters function in an admonitory way, for no one ever truly gets away. The official news organ posts a headline that promises to explain “Why Freedom of Expression Will Prove To Be An Ordeal for You.” As the book comes to a close, the stage seems to dissolve as the “curtain falls apart, having nothing else to live for.” Thus, one framing narrative after another collapses. Mody erects this endlessly recursive line-of-dominoes structure and then topples it.

Having navigated this wild ride of a text, however, discouragement is the last thing that the reader feels. Rather, one emerges with a feeling of glee. Every moment of this book is a testament to resourcefulness and insubordination. The detours and proliferations of Kala Pani, along with its embrace of absurdity, become a means of survival that jumps over the limitations of the rational. There’s a sense of suspension, of process—“cursor in internal disorder”—that beguiles the intrepid reader to follow chaos into constellations that make order as we know it irrelevant.