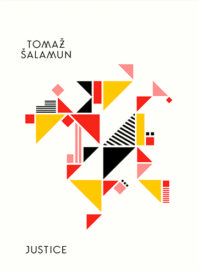 When Tomaž Šalamun died on December 27, 2014, the poetry world lost one of its most playful and fearless practitioners. This can be seen on every page of Justice, his sixteenth volume translated into English.

As this is the first work of Šalamun’s to appear after his death, it's tempting to see the book as a collection of his last poems. This isn't correct, however, as the book was drawn from "several collections and unpublished works," notes the publisher. Both titled and untitled, the 103 poems appear in six sections: "The Waterfall," "I Value My Semen," "Justice," "Red Mustang," "The Nightingale," and "Windy But Nice."

As usual, Šalamun subverts any expectation of a poet who takes himself too seriously. In "The Master," his experimentation becomes more even playful, as words began to break in unexpected places: "He op ens his mo uth. // He mis ses his glas ses." While some may wonder if the translator took liberties with the original poems, this is not the case, as the translator's note calls these "our translations.” Šalamun was quite involved with the English versions. The translations consistently charge the language, as can be seen in the second section title.

This title, "I Value My Semen," reveals a theme in the book. More so than any previous collection of Šalamun's work, sex enters the stage. In "Stripper," we learn how "the audience starts yerking on their seats." In "My Pricky Wants to Fuck! My Pricky Wants to Fuck!" sex is addressed as if a person or god: "O juice, I see you in yellow blinkers. / Caress a bit my little prick, caress me!" In an untitled poem that consists of only one line, the speaker tells us: "I see sex I eat sex roofs are soaked by rain." The speaker’s appetite halts at the view of the rain, nature’s fertility—or is this rain a projection of the speaker? At times, the sexuality can be disturbing, as when Šalamun writes of "fat decadents who day and night / sucked tender boys' penises."

While sexuality often roils the poems, mortality counters it. An untitled poem closes with "I don't want to die on the steppe, I don't go on / I want to be killed by a cicada, the earth's womb." There's comfort to be found in this odd disclosure. Likewise, mortality informs the most moving poem of the book, the untitled last poem. The tone here, unlike that throughout most of the book, feels somber:

The shortness of the lines implies a struggle to breathe. The speaker later tells us, “When I’ll breathe, I’ll die,” and eleven lines later, “I breathed.” There’s ease and grace in this departure.

Justice leaves us with Šalamun at the top of his form, effortlessly creating incandescent poems. Given that he penned over fifty collections of his poetry, surely it isn't unfair to expect many more translations of Tomaž Šalamun’s work in the years to come? May they all be as vibrant as those found in Justice.