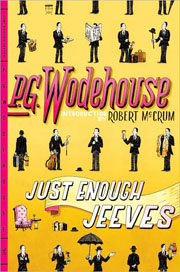 For those not already familiar with P. G. Wodehouse’s Jeeves material, a sketch: these are funny books about rich British people, set more or less in the first half of the twentieth century. Bertie Wooster, the narrator, is a genial young upper-class twit who regularly finds himself embroiled in troubles of a sort alien to you and me but inimical to Bertie’s lifestyle, troubles falling almost universally under a small number of types: 1) Bertie accidentally becomes engaged to a girl to whom he does not want to be engaged, but cannot break the engagement because he is a gentleman; 2) a friend of Bertie’s is in love with a girl and it falls to Bertie to promote the course of their love (sub-type: the girl is of the wrong sort and it falls to Bertie to obstruct); or 3) Bertie is enlisted by one of his aunts (or, sub-type, by a love-object of the wrong sort) in some objectionable and basically frivolous scheme. Out of these troubles, several of which may occur in conjunction and all of which may be complicated by the presence of blustering uncles, sneaking cousins, touchy French chefs, and other flotsam of British upper-class-twit life, Bertie will inevitably be rescued by Jeeves, his valet, who knows everything.

Wodehouse wrote a lot, and much of it is good, but the Jeeves books are his most popular works and pretty clearly the best. This new omnibus, Just Enough Jeeves, offers three Jeeves books bound in one volume: two novels, namely Joy in the Morning (1946, sometimes published in the U.S. as Jeeves in the Morning) and Right Ho, Jeeves (1934, sometimes published in the U.S. as Brinkley Manor), plus one collection of short stories, Very Good, Jeeves (1930). There’s also a short introduction by Robert McCrum, author of P. G. Wodehouse: A Life (Norton, 2004).

It isn’t clear to me why new editions and collections and repackagings of Wodehouse appear so frequently. He’s still popular, but it’s not as though he’s in danger of going out of print; last week I walked into a bookstore and found perfectly good editions of two of the three books in Just Enough Jeeves on the remainder table. If you’re new to Wodehouse and want to test the waters, however, the selection in this volume is quite good: Joy in the Morning is arguably the most perfect Jeeves novel;Right Ho, Jeeves peaks in certain highly prized scenes and includes a notable diatribe by Anatole the chef (“This is a bedroom, what-what, not a house for some apes? Then for what do blighters sit on my window so cool as a few cucumbers, making some faces?”); and Very Good, Jeeves represents the cream of the Jeeves short stories. The book design is unproblematic, the type is entirely readable, and the McCrum introduction provides some basic context. The only drawback here is the size of the volume: at just over 700 pages, it’s not unmanageable, but also not what you want to slip in the backpack for a weekend retreat, which is something you should be able to do with Wodehouse.

It’s difficult to get at the silk-smooth yet weirdly complex nature of the humor here. Although an accurate description of the plots of these stories, the outline above—bumbling gentleman looked after by sophisticated valet—in no sense represents what is good about them. That would be the language, and Bertie’s interior world as represented by the language; the plots are just scaffolding on which to hang the language. Its characteristic feature is a radical mixing of lexical registers: although Bertie is an Eton- and Oxford-educated gentleman who once won a prize for scripture knowledge, what’s really on his mind is the murder mystery he’s reading, the latest London show, and what to order for lunch at the Drones Club, where young gentlemen gather to tell racy anecdotes and throw rolls at each other; he’s swimming in divergent strains of English, but seems incapable of distinguishing among them, and thus winds up juxtaposing them in unexpected ways in his narration. You get things like “it had naturally seemed that the end of the world had come and Judgement Day set in with unusual severity.” You get words such as “mulct” and “meed” coexisting with “oojah-cum-spiff.” You get dialogue like:

“Cleopatra wouldn’t have liked him.”
“Possibly not, sir.”
“And I doubt if he would go any too well with Tallulah Bankhead.”

Such things occur in basically every sentence, dramatizing the fatuous events in the life of this rich and boring man in an absurd melange of terms from the Bible and the racetrack, the drawing room and the London tabloids, Shakespeare and The Poisoned Pin—all cast in a flawless, classically-inflected syntax. Sometimes Jeeves speaks up, and then you get a similar gag, but Jeeves speaks exclusively in a polished valet language, rendering the fatuous events formally:

one day the bird chanced to be lethargic, and his lordship, with the kindly intention of restoring it to its customary animation, offered it a portion of seed cake steeped in the ’84 port. The bird accepted the morsel gratefully and consumed it with every indication of satisfaction. Almost immediately afterwards, however, its manner became markedly feverish. Having bitten his lordship in the thumb and sung part of a sea-chanty, it fell to the bottom of the cage and remained there for a considerable period of time with its legs in the air, unable to move.

One effect of all this is that the stories are funny, and the more you like language the funnier they are. Beyond the humor, these shifts in register often come so thick as to yield a unique pleasure as you have the sense that what you’re reading is, in a way, complete gibberish, but that you understand it perfectly well nonetheless.

But there’s something else in Wodehouse, something more subtle—a comfort. When I’m overcome by dread, I find Wodehouse even more useful than liquor; it is impossible to read a Jeeves story and fail to entertain the possibility that all is right with the world. This effect stems in part from the conventional plots and the small stable of character types, which work together to put the reader in a secure and predictable environment; it stems in part, too, from the ridiculous nature of the problems the characters face, and the way the narrative muffles the emotional reality of even those problems. But it also arises from the way all this language comes together so well. Wanton juxtaposition of different strains of English seems almost like an experimentalist or postmodernist trick, something designed to undermine, to draw attention to gaps and inconsistencies, to highlight difference. In Wodehouse, though, all these languages fuse together into a single language that, although absurd, is positive and distinct and unmistakable. One has the impression that all the differences in the world, rather than signifying a terrible disintegration, are actually superficial and sort of delightful. Perhaps it’s the universal role of comedy to make one feel this way; in Wodehouse, that role gets executed in the language of every line. And if you believe that language structures your experience of reality, then Wodehouse’s comedy goes as deep as comedy can go.

People who write jacket copy tend to say, or at least imply, that Bertie Wooster is stupid. This is an error, for Bertie inhabits his world very successfully. He knows what is good (tea in the morning, hot Scotch-and-water after a difficult experience in the country), what is to be avoided (the ire of Aunt Agatha, the departure of Anatole), and how to maximize the former and minimize the latter (trust in Jeeves). It’s true that he’s ignorant of the problems his social position implies, and so maybe he’s naive and incurious and a waste of a classical education—I won’t claim he’s actually bright—but to take a world of confusion, transform it into a world where everything fits together, and then live in that blithe world as though it were the only one that ever existed—that takes a certain genius. Wodehouse nailed that genius, which perhaps becomes even more remarkable when one considers that the exterior world in which Joy in the Morning was written was one in which the Nazis were occupying France. Even when things were most imminently falling apart, he was able to put a few scraps of civilization together into something safe and whole.