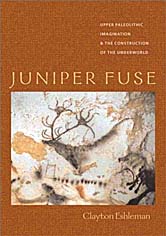 In his 1981 collection of poems Our Lady of the Three Pronged Devil, Clayton Eshleman concludes his introduction with the following:

As species disappear, the Paleolithic grows more vivid. As living animals disappear, the first outlines become dear, not as reflections of a day world, but as the primal contours of psyche, the shaping of the underworld, the point at which Hades was an animal. The new wilderness (Jerome Rothenberg's phrase) is thus, to give it my own turn, the spectral realm created by the going out of animal life and the coming in, in our time, of these primary outlines. Our tragedy is to search further and further back for a common non-racial trunk in which the animal is not separated out of the human while we destroy the turf on which we actually stand.

This introduction and many of the poems which follow it reappear in Juniper Fuse, the passionate and visionary summit of an unusual creative project: translating and reintegrating the narrative of awakening humanity as depicted within psychic wombs on the cave walls of southwestern Europe. Artfully traveling along the faultlines of a burgeoning consciousness, at every opportunity submerging himself in the abyss of extrasensory and intra-millennial realities, Eshleman fuses his imagination to the plight of the Cro-Magnon and locates the birth of metaphor at the parallax Fall, when awareness of separation from both animal and mother lit the mind and delivered art. In “Placements I: ‘The New Wilderness,’” Eshleman writes: "At arm's length the image, my focus the extent of my reach. Where I end the other begins. And is not all art which genuinely moves us done in the 'dark' against a 'wall'? Olson's whisper (a prayer), '(boundary) / Disappear.'"

Eshleman, as his devotees are well aware, has been immersed in this source for over 25 years, and Juniper Fuse, his "saturation job" á la Charles Olson, is indeed a unique achievement. Inspired by the work of a vast array of thinkers—Rimbaud, Norman O. Brown, Mikhail Bakhtin, Wallace Stevens, James Hillman, Sandor Ferenczi—Eshleman has constructed the book on hinges that join poetry to prose to epistle to image to dream to myth. He aims to "make use of a pluralistic approach that may result in a fuller 'reading' of Upper Paleolithic imagination than archeological or literary approaches alone might yield," and further notes that "as a poet's book, Juniper Fuse is an attempt to reclaim the caves of the Dordogne and the Pyrénées for poets as geo-mythical sites in which early intimations of what we call 'muse' may have been experienced." As poet, scholar, and explorer, Eshleman interviews poetry's potential throughout, and in both prose and verse accomplishes a rare lyric force. His "Notes on a Visit to Le Tuc D'Audoubert," for example, incorporates drawn images copied from cave walls with projective verse and linguistic equations—language as symbol, as mark.

A core essay, "Placements II: 'The Aranea Constellation'" (originally published by Rain Taxi as part of their Brainstorm Series of chapbooks) saturates its prose with poetry ("An Aranea centered in her web, afloat yet anchored between ground and sky. The natural mind of the earth always spinning"), poets (Vallejo, Rimbaud, Artaud, Whitman, Ginsberg), and scholarship ("I see in the Cretan labyrinth not only the ancient ghost of a spider-centered web but Paleolithic man leaving a living site and becoming a hunter following the herds, thus entering the mythos of killing and sacrifice.") In this essay, Eshleman reimagines the myth of the labyrinth, placing the artist in Ariadne's stead: "The transformation of the 'given life' to a 'creative' one not only involves entering a dark or 'inner' life, but generating as well a resistance substantial enough to test oneself against and to shape the focus of one's work." Much archeological examination is referenced throughout with generous quotations riffing off Eshleman's lyrical musings.

A refreshing, and even loving, reinterpretation of the Feminine as source and power ("The Mothers of Lascaux flayed the penises of the Fathers") finds its advocate in Eshleman's voice. Pondering Sandor Ferenczi's Thalassa: A Theory of Genitality, he provides an alteration on an "essentially masculine viewpoint" with his "Thalassa Variations," an erotic and ambitious poem-as-vulva. The entire book probes womb/wound as symbolic naissance of metaphor, thus thought. One considers the illiterate María Sabina chanting from ground zero of Language. Her source—literally the mushroom, spiritually "The Source" (earth, memory, imagination)—is Eshleman's, Cro-Magnon's, and ours. An especially arresting narrative in the book involves the author attempting to "nurse" from his analyst's finger, a memory he encounters after breaking his ankle in an accident and spending the night spontaneously hallucinating in his ditch-bound car. He likens this experience to the eating of amanita muscaria mushrooms, having seen slugs writhing postprandially near a patch of the red and white fungi earlier in the day, and describes how he symbolically "crawled to the bottom of a 'wild' cave, which clawed out at me as I attempted to emerge." Birth imagery is hardly avoidable, but Eshleman handles it with kaleidoscopic exuberance and grace. Fond references are frequently made to his wife Caryl—an obvious comrade in this adventure—and to prominent feminist thinkers such as Adrienne Rich and Barbara Walker.

In fact, every piece in the book works in collaboration with the facts and imaginings Eshleman has encountered on his journey (e.g. "I felt the broken horse rear in agony in the cave-like stage of Picasso's Guernica . . . ")—the breadcrumb trail leading from Cro-Magnon to Microchip. It is this sense of collaboration which gives the book its grand scope and spirit of generosity. Eshleman avoids staking personal claim on his findings but rather allows them to ignite and to direct his readers' imaginations as he connects the dots from cave wall to mind to page. The book is abundantly useful, as I believe it is meant to be—a rich, brilliant, exalted source for the artist, the thinker, the human.

An attempt to "analyze" this work seems antithetical to its purposes, for to enter the book is to enter the cave: it is altering and singular, hallucinatory, tragic, ecstatic. The scholarship is exhaustive and painstakingly elaborated in the "Notes and Commentary" section at book's end, while a quick glance at the bibliography provides an ample syllabus for at least a decade's worth of "saturation." Cave images, diagrams, and photographs accompany both prose and poetry, and are nicely showcased in a full-color section in the book's middle. As a life's work, the volume is unusual for a poet and therefore especially valuable: its form—essay, verse, image, scholarship—is "multifolate" and entirely unpredictable. Juniper Fuse is pan-poetic spelunksmanship, alchemical book of shadows, psychic journey extraordinaire. From inside the womb of the human mind, Eshleman has traced an archetypal (and, according to Eliot Weinberger, "Post-Darwinian") evolution, delivering from it his own lyrical documentation of origin's myth.

With such a rare and important work at stake, one only wishes that its prominent university press publisher had laid out the text with more reasonable margins (the left margin, occasionally used for photographs or drawings, is a generous two inches, while the right almost flows into the spine, making the task of reading occasionally arduous). That aside, the overall design is beautiful, and the inclusion of color reproductions essential to the book's gravity as a contribution to American poetry, art history, human psychology, and archeological investigation. Juniper Fuse is an indispensable guide to the human imagination, and can't be recommended highly enough.