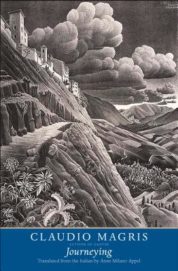 Writing in Italian but steeped in the literature and cultures of Mitteleuropa, Claudio Magris remains a "writer's writer" rather than a popular one, and Journeying will do little to alter the fact. That's too bad. These occasional pieces display the erudition and charm for which Magris is known, and have the added virtue of being relatively short. Is there any point in revisiting impressions of Berlin before the Wall fell, for example, or of Prague during that strange period when Czechoslovakia had come apart and was unsure how to reassemble itself? Magris says yes, and he's got a point:

History does not consist only of what has occurred, much less of absurd, far-fetched alternatives, but also of possibilities . . . The hopes of a generation in a specific historical period are part of the history of that time, and they too have therefore contributed to making us who we are, even if the course of events later overlooked them or proved them wrong.

It can be relaxing, in fact, to relive the dreams and anxieties of a historical place and moment with the knowledge that, after all, things turned out alright. In any case, little of the material Magris has gathered here is expressly political; far more of it is devoted to literary, cultural, and sociological observations. Although the essays have not been divided into sections, the book follows a pattern of sorts, with pieces about Spain—the least interesting part of the book—followed by impressions of Germany and specifically Berlin. In time we arrive in Poland and later the Balkans, where Magris introduces us to several obscure but enduring micro-cultures, including the Sorbs and the Cici.

Three attributes stand out in these pieces: their brevity (they seldom run to more than a few pages); Magris's command of the historical background and common lore of the cities and regions he's describing; and their overriding humanity. Magris tends to be less interested in monuments and past events than in individual people, friendships, and the fellow-feeling that animates any healthy community or culture. Mad Ludwig's castle interests him less than the personality of the Bavarian king himself, for which Magris feels a certain sympathy.

In one essay Magris journeys to California to examine exiled serial composer Arnold Schoenberg's desk. He describes the objects and papers, makes a few remarks about the character of Schoenberg's music, and discusses how disappointed Schoenberg was that Thomas Mann (who lived just down the street at the time) used him as a model for the diabolical artist in Dr. Faustus. But what interests Magris most are the family photos on the desk. Here he sees a man attached to his children and grandchildren, inventing ingenious games together and passing the days in an atmosphere of familial love than many would envy:

In that room of Schoenberg, maestro and creator of dissonance, we feel the mark of harmony, of a man who lived in harmony. It is the room of a fabulous father, grandfather, or uncle whom we per¬haps knew in our childhood, a family member who might not have amounted to much and whom others regarded with suspicion, but who for us was the magician who made things come alive, transform¬ing pieces of paper into mysterious creatures . . .

These impressions, which seem to have struck a chord from Magris's own childhood, are confirmed and amplified by Schoenberg's daughter Nuria, who now looks after the museum.

Magris has an abiding affection for the peoples and cultures of his home region of Istria, a peninsula at the head of the Adriatic Sea that has changed hands several times during the twentieth century and is now divided between three nations. Yet he avoids wading into the morass of crimes and counter-crimes that a detailed history would expose. His position is a simple one:

An ethnic group that asserts itself often does so at the expense of another, weaker group, thus violating the principle in whose name it protests against the stronger state or nation by which it in turn feels oppressed; history is one big frothy fermentation in which bubbles eager to emerge continuously destroy one another, bursting one by one.

In contrast, throughout these disparate pieces Magris not only champions but allows us to catch glimpses of expansive polyglot pockets of local culture. For example, on a journey to the land of the Ciribiri, he shares a meal with some of the local inhabitants:

At the table, deliciously laden, Italian, Istro-Romanian, and Croatian are spoken. For this free, relaxed people, the Istro-Romanian identity is not a visceral obsession, a purity to be protected from any contamination, but an added rich¬ness, which coexists peacefully with ties to Italy and being part of Croatia. That is how a border identity should be, an enrichment of the individual, whereas instead the border often exacerbates barriers, divisions, hatred.

Magris, too, is a creature of the borderlands, and he has been amply enriched by the experience. In Journeying he celebrates the Jews who have no home, exposes to a wider audience the obscure cultures in the midst of which he was raised, and casually offers up the fruits of a lifetime spent exploring the literature and customs of regions farther afield, all the way to Norway and Vietnam. Laced with both wisdom and fellow-feeling, these pieces support an ethos that has little, in the end, to do with journeying. We might meet up with it anywhere that people relax their guard and get to know one another well—maybe right down the street.