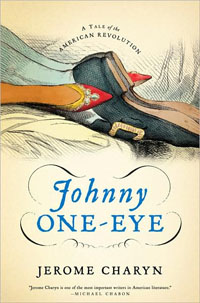 Jerome Charyn's new novel, Johnny One-Eye, is a picaresque set in Manhattan during the American Revolution. The eponymous hero was born in a brothel run by his mother, Gertrude. His patrilineage is unclear, but may include the taciturn, red-headed giant, George Washington. For the duration of the Revolution, Manhattan teems with prostitutes and spies, and Johnny's allegiances, as well as those of the supporting cast, often waver. Johnny One-Eye's great success lies in creating a world steeped in “the hurly-burly of a war without real perimeters or rigid lines.” Its downfall is in the ease with which its hero rides the flux.

Mercenary though he may be, Johnny is loyal to a handful of characters. He ties his fate to the traitorous Benedict Arnold, in whose service as a “scribble boy” he lost an eye; to a British officer who employs Johnny as a spy; to another redcoat who prosecutes Johnny as a double agent; and to Washington, whose soup he (mildly) poisons for the chance at an audience with the rebel leader. This tangle of alliances creates an intriguing situation only heightened by Johnny's hopeless attraction to Clara, the stunning “octoroon” prostitute adopted by Gertrude, the brothel's madam, when both she and her biological son was young. Gertrude's devotion to the “farmer-in-chief”—affection recklessly returned by the general—leads Johnny to conclude that Washington is his father. These flimsy bonds push the boy's sympathy over to the shoeless, rag-tag rebels.

Still, Johnny's access to the major players of the day seems too convenient. The crown's secret service is stymied when looking for Washington, but this teenager who begins the tale under suspicion for attempted assassination has a sixth sense on the subject. Johnny's easy access to the general is only topped by the general's access to regular escape. Washington and his British counterpart square off in a dramatic game of blackjack set in the brothel: “We'll announce a colossal game, a tournament of champions at the Queen's Yard,” says William “Billy” Howe, the British general defending Manhattan. “My spies tell me he won't be able to resist.”

The execution of the scene, however mawkishly set-up, shows Charyn's gift for period drama. Here, the general asks to borrow a ribbon, the significance of which is known to he and the madam alone. “Washington bowed to Gert with a sweep of his arm that was like the motion of a duelist or a dancer of the minuet. For a moment he was outside Billy's realm—Billy's headquarters and house of cards—and was only with Madame. He committed the edge of her ribbon to his lips, said, ‘Now I have the luck I will need,’ and ducked inside the closet.” For Charyn, Washington's ability to hold it together is mythic, and here, the magic holds.

Johnny takes the myth one step further, putting an equally monumental woman behind the farmer in chief: “Gert was his [Washington's] America—not the America of Martha and Mount Vernon—but of a certain bawdiness that seemed to elude him, of imagination he seemed to fear. He could not have conducted a war without such imagination, conjuring up a people and an army with the force of his mind.” Charyn captures that bawdiness, the rough rancor of thirteen intransigent colonies formed by dissidents and debtors, in a remarkable way. He demonstrates a nearly effortless use of archaic lexicon. Despite a few stumbles (“I espied a pair of bodkins,” or “Verily her face was aglow”), the story earns its yellowed parchment feel with this sort of subtlety: “I wrote love letters for the keepers of the pit dogs,” Johnny says of his time on the prison ship. Of the other “nuns” in the brothel, he writes, “They were fine Christian women who went to the mariners' church, the only one that would have them, and indebted themselves to the tobacco dealers who took advantage of their passion.” The Revolutionary age was singular, a nation simultaneously learning to talk and hitting puberty. It's an oddly relevant one, too, as Charyn makes clear with this sentence: “They expected the entire town to greet them as liberators.” His “they” is the British and his “town” is Philadelphia, but anyone can make the contemporary substitutions.

What keeps Johnny One-Eye from being a great book is Johnny One-Eye himself. At a time when nearly everyone was almost always risking practically everything for abstractions like liberty, our hero takes almost no initiative for even something as worthwhile as romantic love. Two women, spy-prostitutes, both tell him they wished he had kidnapped them, taken them from the battlefield. Don Quixote wouldn't have hesitated. Our picaro, though, is meek. He moves too passively between epic figures, never understanding them, rarely exercising even a healthy amount of free will. Johnny even recognizes this some eighty pages from the end: “Damn my own reticence, my own inclination toward folly—I was always at the edge of things.” It's anachronistic, and hard to believe someone who reads Aeschylus and Aristotle might believe it, but maybe Johnny thinks the world is flat. Charyn, unfortunately, lets him think so.