Rain Taxi is proud to present a virtual conversation with John Jennings and David Brame, the adaptor and illustrator, respectively, of the debut title from MEGASCOPE, a new line of graphic novels from Abrams ComicArts dedicated to showcasing speculative works by and about people of color. After the Rain is a graphic novel adaptation of Hugo, Nebula, and World Fantasy Award–winning novelist Nnedi Okorafor’s short story “On the Road.” The presenters will discuss the new book, new imprint, and the importance of increasing access to great speculative writing by people of color. Free to attend, registration required. 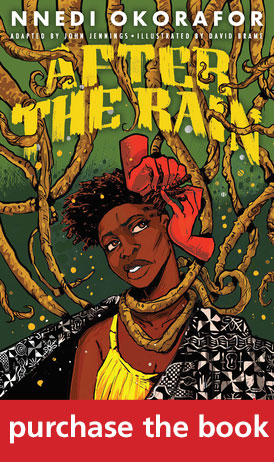 John Jennings is the curator of the Megascope list and has previously created graphic novel adaptations of Octavia E. Butler’s Kindred and Parable of the Sower. Also the co-editor of the Eisner Award-winning collection The Blacker the Ink: Constructions of the Black Identity in Comics and Sequential Art, Jennings is a professor of media and cultural studies at the University of California, Riverside. Learn more at creativedisturbance.org.

David Brame is a comics creator who has worked on titles such as Box of Bones and Necromancer Bill. An afrofuturist and a scholar, he recently contributed to the book Sanford Biggers: CODESWITCH published by Yale University Press. He lives in Alaska.