Join us in welcoming author, actor, and renowned humorist John Hodgman to the Twin Cities! Hodgman will be reading from and speaking about his new book, Vacationland: True Stories from Painful Beaches (Viking), in which our fearless author wanders through the wildernesses of Western Massachusetts where he spent much of his youth, the beaches of Maine that want to kill him, and the haunted forest of middle age that connects them. Though wildly funny, this is also Hodgman’s most poignant and sincere book to date—don’t miss seeing him present Vacationland live in person!

We are pleased to announce that John Hodgman will be joined in conversation at our Nov. 2 event by the Twin Cities’ own John Moe!

This event requires a ticket to attend. Advance tickets sales have completed, but tickets are available at the door. Ticket prices are:
$30 for one ticket / one book or $40 for two tickets / one book.

Copies of Vacationland and other books by John Hodgman will also be available for purchase at the event courtesy of Common Good Books. A book signing will follow the presentation. We hope to see you there!

If you are an individual with disabilities, please let us know if you require any special accommodations to enjoy this event—write us at info [at] raintaxi [dot] com.

Known to many as the “Resident Expert” and “Deranged Millionaire” from The Daily Show, and to even more as the “Personal Computer” in a series of Apple commercials, John Hodgman has brought his innovative brand of humor to podcasts, movies, stand-up shows, and the White House. He is the author of three books of fake facts and invented trivia, all of them New York Times Bestsellers, and his writing appears everywhere from McSweeney’s to the New York Times Magazine. Learn more at http://www.johnhodgman.com. 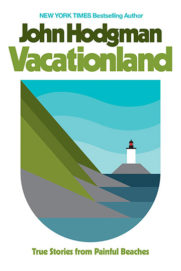 “If Borges and Ben Franklin got drunk and decided to write a book together, the result might have been something a lot like this.”
—Tom Perrotta