Those who've long suspected Lou Reed might be overstating his importance to the Velvet Underground have two new pieces of evidence to consider: Exhibit A comes in the form of words, a biography of John Cale by Tim Mitchell titled Sedition and Alchemy (Peter Owen Publishers, $34.95); Exhibit B, meanwhile, comes in the form of words and music, a new CD of original material by Cale titled HoboSapiens (Or Music, $15.95). In looking at these two together, we can see not only how various genres and perspectives work to give us a picture of a life. We can explore the connections between music and words, words and music, not only obviously as in song, but subtly as in the sound of language, the music that sentences and syllables create.

To explore this relationship, let's begin with the more obviously word-based art. Written with the approval and general cooperation of Cale, Mitchell's biography attempts to address a life in full. It begins at the beginning of the beginning: the birth of the surrealist movement to which Mitchell believes Cale is a spiritual heir. And though it occasionally shuffles Cale's chronology, for the most part it moves forward through time in the same way sitcoms tell us we do—this leads to that leads to another temporary chapter-like end.

Not that this is a bad thing. Bringing Cale's story up to the present, Sedition and Alchemy covers all the bases that we need to see the surface of a life. Mitchell shows us not only the artistic continuum to which he believes Cale belongs, but the cultural context in which the musician came of age. From the Welsh coal-mining village of Garnant, where Cale lived until he was 19, to the class-based jibes of London's Goldsmith College where Cale first pursued music seriously, to his immigration to America as a Leonard Bernstein Scholar studying with Aaron Copeland at Tanglewood, onto the better known story of his fateful meeting with Lou Reed (as a recruit into the pre-fab band The Primitives, put-together to perform Reed's Brill-Buildingesque song "The Ostrich") and the pair's co-creation of the Velvet Underground, we get the details and events that made up the man, right through to Cale's continuing solo career, troubled love life, and reaction to September 11th.

Appearing soon after Cale's 1999 autobiography, What's Welsh for Zen (co-written with Victor Bockris, best known for his biographies of Lou Reed, Keith Richards and Patti Smith among others), Mitchell's Sedition and Alchemy runs the risk of covering familiar ground but, for the most part, avoids this danger in two ways. First, it approaches Cale's story from a more objective, analytical stance, giving us a much clearer frame in which to see the life Cale shared with us in his autobiography through vivid yet impressionistic anecdotes. Second, it shows us how Cale's experience of the attacks on the World Trade Center (he watched from his lower Manhattan apartment window) not only confirmed many of his worst fears about global politics, but revealed what had long been a driving force behind much of his music.

It is a fascinating journey back and forth across the Atlantic, combining artistic surrealism and surreal politics in a way that few would have thought compatible. When we flashback to Cale sawing away at his viola on "Black Angel's Death Song" before a convention of psychiatrists while Andy Warhol associates confront the audience with dildos and questions like do you think your penis/breast/ass is big/firm/small enough, then fast-forward to Cale on stage 15 years later screaming about mercenaries and saboteurs from behind a hockey mask, or Cale 19 years beyond that, staring at the twin towers aflame and writing his friend e-mail messages reading, "I was getting the paper…there was a stream of floating debris coming down…one guy saw a wheel drop out of the sky and bounce on the street next to him," we realize that we've come through one end to the other, far less changed than we might have believed.

Cale's life is one of fear and loathing, fear and trembling, fear as a man's best friend. Throughout he seems to have dealt with this in distinct yet related ways: as a child retreating into a world of music, long-distance running, and breakdown (upon returning to school he explained his absence as the result of meningitis, only to have his teacher remark, "To have that you must first have a brain"); as a young man expressing anger through confrontational personal and musical styles (pulling an ax during his student recital at Tanglewood, employing a droning rhythm in the VU so as to create "an assault on the senses"); as a lover-father-solo performer wavering between moments of extreme lyrical beauty (his keyboards-in-counterpoint work with Terry Riley on "Church of Anthrax") and troubling sordidness (his beheading of a chicken on stage to taunt his drummer, a vegetarian); and as a mature composer, retreating once more, yet this time from drugs (a decade-long cocaine habit) and self-sabotage (dozens of projects—including a Pynchon-commissioned opera of Gravity's Rainbow—abandoned before completion). Even while doing so, Cale never shied away from describing a darkness that feels more genuine than anything Lou Reed has "chronicled" from the streets. Cale's fears are more innate and yet reflected in the actual world. Songs like "Gun" and "Fear is a Man's Best Friend" lie at the intersection between the psychosexual and the sociological, depicting a world in which the beheadings, drive-by shootings, and bombings on the nightly news encourage us to accept "collateral damage."

If Sedition and Alchemy lacks some of the colorful humor of the anecdotes in the autobiography, and if it sometimes feels as if it's drowning under an abundance of details concerning tour schedules and studio production methods, that's because Mitchell has set himself a different task. This is a study of surrealism in the body politic and the politics of the body. As ironic as it might seem that this would demand a more rigorous, conventional style, such is the case when a biographer attempts to assemble enough evidence to make a point. Whether or not we actually agree with Mitchell's final analysis—that Cale is a political savant channeling an increasingly surreal world—we have to give him credit; he's done his work. Given the importance of Cale as a musician crossing classical and rock boundaries, this is to be welcomed. And it should encourage you to read this book. 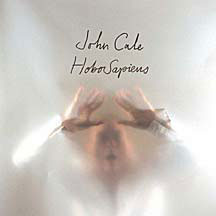 But what of the music? Considering the now 60-year-old Cale has just released his first full-length album of new material in nearly seven years, turning in that direction seems all but mandatory. After all, with HoboSapiens, Cale has added yet another layer to his palimpsest of sounds and song lyrics. At the risk of giving short shrift to a career that is just screaming out for the boxed-set treatment (2001's Sun Blindness Music, a collection of previously unreleased instrumental pieces inspired by La Monte Young, is a step in the right direction), one can see in Cale's trajectory a mellowing that is anything but limiting—one that in fact becomes fuller and richer for the attentive listener, even if said listener isn't necessarily inclined to swirl ecstatically in the spirit of Sister Ray.

Another way to put this is that Cale's career has moved from the classical to the fringes of the popular to the classical and then back again and again. Indeed, one could almost use the albums as dance steps between the two worlds, the VU albums leading to the pop-folk sounds of Cale's first solo album and that leading to Cale's avant-garde classical experiment with Terry Riley even as he was helping birth from behind the mixing board some of the greatest rock albums ever released (The Stooges' debut album The Stooges, Jonathan Richman's The Modern Lovers, Patti Smith's Horses, the eponymous debut by Squeeze). If the early '80s saw both renewed contacts with La Monte Young and, in the album Sabotage/Live, a return to the feedback and assault of the VU years (the other godfather of punk deserved his belated recognition after all), later works descended briefly into the disappointing L.A. slough of cocaine and swimming pools before returning in ever fuller and richer form in the '90s with the VU reunion MCMXCII, the Lou Reed collaboration Songs for Drella and the world-music-inspired rock album Walking on Locusts.

Now we have HoboSapiens, an unfortunately titled work with sometimes uneven lyrics, but one that definitely captivates on a purely sonic level. Cale has often said that he prefers the instrumental to the vocal (even if his words can be trenchant and his delivery hair-raising), and that comes through here clearly. In almost every song on HoboSapiens, Cale uses the bridge, that all important link between the rise and fall of the song, to show his truest talents, sounds of various sorts colliding and rearranging in a kind of eye-of-the-whirlpool smoothness. It's as if The Beatles' symphonic moments in "A Day in the Life" were conducted by a floating baton drawing figure-eight- and diamond-patterns in the air. These gentle yet fully realized moments work surprisingly well with the more traditional song structures surrounding them, though even those are not as traditional as one might at first believe, colored as they are by surprising aural locutions and filigrees—a rapidly rising and descending series of notes on a piano, a backwards-sounding bass-line, strings that merge into a bee-siren ululation.

In the simplest sense, these are washes of electronic color, a kind of watercolor-electronica vaguely reminiscent of Beck and the Beta Band at their most introspective. Yet, they achieve a unique quality not only through their subtle, yet rapid rhythmic changes, but through their interplay of various instruments and sampled sounds, a not so much sinister or eerie quality as one that is simply other. As with the otherness of rain-slick lights on the highway as your windshield wipers move back and forth, there is a trance-like sense induced by these songs, a repetition of simple drum loops overlaying surprisingly sophisticated rhythmic shifts so that the listener gets lost in and then pulled away by these sounds—much as one might have been listening to the best early Velvet Underground, though the delivery in that case would have been much louder and more aggressive.

Cale seems to have adopted these stylings and the joys of sampling as his own, much as Charlie Parker is rumored to have captured the random honkings of traffic to craft his solos on stage. At times surrounded by backing vocals that wouldn't sound out of place on a mid '80s XTC album (Reading My Mind), at others by the woosh and glide of electronically altered voices that could just as well be electronics themselves ("Caravan"), Cale frames these songs in a low-key delivery that signals less resignation or acceptance than it does an endurance in the face of adversity, a now calmer approach to dealing with the realities he must face.

And the realities are not simple. Again, images of war and terrorism dominate ("Afghanistan, Afghanistan whatever happened to you.…they're cutting their heads off in the soccer field"), though it's also true that Cale seems to allow himself more time to enjoy the fruits of his labors here (the wonderful instrumental "Bicycle," for instance). Songs apparently aimed at his wife/lover ("Reading My Mind") and inspiration ("Magritte") further help to explain the almost transcendent tone running through. As Cale says in "Caravan," "Climbing the Fens and the Norfolk Broads / Waiting for Godot in Niagara Falls / Mustn't be late for the Caravan / Mustn't be early for the Garbageman."

In other words, this latest release by Cale shows that he has come to accept yet not forget, to direct his anger into effort toward transcendence rather than revenge. If the words don't do that so obviously, the instrumental sound of the voices delivering them and ethereal sound of the instruments surrounding them definitely do.