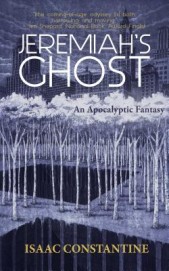 There's no reason for a supernatural being to stay in one place for very long. A spirit, a ghost, a disembodied soul—however you want to conceive of it—would most likely hop around and meander through the Universe, perhaps in search of some grand epiphany about existence. In Jeremiah's Ghost, Isaac Constantine's debut novel, the titular character does a fine impression of such a phantasm: he bounces through time and place, unraveling the threads of his young life and searching for a meaningful way to sew them back together. Along the way, he'll contend with grief, fear, pain, love, hate, and sorrow. He'll question his own history, and that of the entire Western World.

The construction of this terse, challenging work is its strongest hallmark. Jeremiah is the only character who finds his way into each of the book's chapters, which would be better described as “episodes.” It begins in his waning days of college, near the turn of the 21st century. From there, Jeremiah moves ahead to his lucky post-graduate internship at a prestigious literary magazine, then back to childhood, and forward again. It's easy to speculate how much of the work is semi-autobiographical for Constantine, who, like Jeremiah, is a writer, grew up in New York, would have finished college around 2001, and briefly worked in publishing.

The distinct voice across three decades of the main character's life is impressive, and only fully appreciated at the novel's conclusion. When Jeremiah is a grade schooler, the prose is plain and straightforward: “Dr. Franny was the school psychologist. She was thirty maybe. She wore grey and blue pantsuits with shoulder pads.” Later, in his drug-addled twenties, the narration gets more grandiose, like it has something to prove: “The gates opened to somewhere impossibly far, past forever, like vast empty spaces where space unfolded and folded again, collapsing impossible distances.”

As quickly as one might resent the self-aggrandizing recent college grad, the frightened young boy who is regularly slapped around by his father (and who might be on the autism spectrum) earns our sympathy. The ghosts that Jeremiah leaves scattered through his past will beg the reader to contemplate and confront his or her own. Each episode on its own might not yield much narrative thrust, but in concert, Jeremiah's Ghost constructs a picture of a young man who, while still incomplete, has grown and changed for the better.