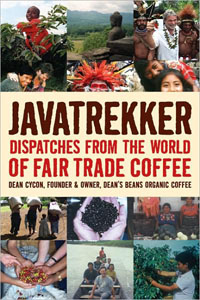 In an age of vanishing frontiers and looming globalization, modern pioneers cannot afford to wield the guns, germs and steel of their infamous antecedents. Instead, Dean Cycon argues, new explorers must be willing to plumb not only the so-called “dark” continents of Africa, South America and Indonesia, but also themselves, simultaneously discovering and disrobing to reveal the human element at the core of their search. Cycon’s chronicles traverse ten countries in nine chapters, tracking the consequences of conventional coffee trade from well-organized cartels in the Kenyan Highlands to disjointed family plots in Papua New Guinea.

As the owner of an organic coffee roaster in Massachusetts, the author’s curious encounters with careworn villagers generate tangible results both at home and abroad. Unlike the typical lawyer-turned-activist, however, Cycon writes in a down-to-earth, droll style, determined to forgo typical legislative inch-worming for an international grassroots assault. Brimming with élan vital, he wages war on the vast network of brains, beans, and bills that fuel New York’s Coffee Exchange, which ignores the increasingly inextricable fates of coffee drinkers and indigenous coffee farmers worldwide.

At times, the adventures read like science fiction, as our narrator basks both in the alien atmosphere and in his description of it. While trekking through Colombia’s Sierra Nevada, the self-proclaimed “Heart of the World,” for instance, he encounters the aboriginal Mamos, who ritually abduct young boys selected to receive the Earth’s wisdom in darkness. Then when his bad knee gives out on the trail, Cycon chews coca leaves, waxing poetic with the sudden burst of energy: “We were encompassed by surreal splashes of color. Long, drooping stamens awaited their dusting of pollen from the hummingbirds and bees that made the air vibrate. . . The forest was dotted with the deep green serrated leaves of healthy coffee plants, the branches drooping low under the heavy load of a ripening harvest.”

However, Cycon’s successive quests lack a definite narrative arc, each discrete excursion independent of its peers. While this may be expected, considering the chapters capture only fragments of an unfinished story, they do not always gibe as they should and sometimes border on redundant. Even more confusing are the author’s parenthetical detours, which devolve—especially in the rushed second half—into a tsunami of tongue-in-cheek quips, enclosed by smiles and frowns. Other risky tactics meet with more success, such as the assimilation of foreign words and phrases into conversation, though it is puzzling how little Cycon discusses translators, endowing his exchanges with an ambiguous lingua franca reminiscent of Star Wars’ English.

The blocks of italicized text after each chapter help offset the book’s minute missteps, grounding the audience in the recent developments of actual issues with Dragnet-like precision. While observing elections and farming practices in Guatemala City, Cycon plants a friendly kiss on Nobel Peace Laureate Rigoberta Menchu, who instructs him to “just keep your eyes on the voting, not on the women.” At the end of this section, some reflections in italics recast the country’s conflicts in hope and humor, bringing us full circle with his final punch line: “The national desire to integrate into the global economy draws more voters towards candidates promising jobs and money. Ex-combatants have settled down, many forming coffee cooperatives. . . Rigoberta may run for president of Guatemala, which shows how indigenous politics have continued to evolve and strengthen. She still won’t let me kiss her.”

This politic fixation is echoed in later chapters as well, in which Cycon’s mission to assist beleaguered farmers is sidelined for the more general mission of helping victims of economic and cultural exploitation. In the pitch black, pouring rain, he frisbees packets of food toward a crowd numbering hundreds, waiting for “El Tren de Muerte—the Death Train” that will either carry them across the border to El Norte (America) or sever a limb with the careless cranking of steel wheels. After picking a fight with a Mara Salvatrucha, a member of the gang that roams the trainyard bankrupting emigrants, Cycon collaborates with the non-profit Polus Center to spearhead an outplacement program for the train’s victims. Likewise, after comparing a map of coffee fields to a map of mine fields, he steers Starbucks, Green Mountain, and the State Department into concert, developing “mine risk education” and funding the “Landmine Victims Trust.”

Cycon’s passionate belief in the power and productivity of organized groups is refreshing, and even unfamiliar at times, given Apathy’s apparent stranglehold on American culture and identity. By spinning a web of influence across business, law, activism, and agriculture, Dean and Dean’s Beans have led a revolution of unprecedented magnitude to redistribute the stolen wealth of the world’s coffee fields. Of course the bean itself is only a medium or metaphor for the greater struggle that will follow; it grows inside a cherry that must be chewed or beaten off before the true fermentation can begin.