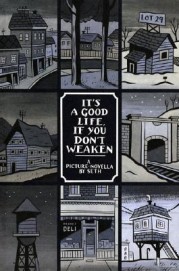 The serious comic book artists of today have a strange lineage to face. Superheroes, gag strips, and pornography are not the tradition most artists want looming over their work, but these genres form the backbone of American comics. Most artists, sooner or later, find themselves addressing the peculiar legacy of their medium. Alan Moore and Frank Miller revised and rewrote the superhero genre; Kim Deitch (the brilliant Waldo cycle) and Dan Clowes (Ghost World, Like a Velvet Glove Cast in Iron) turned the kitsch of their childhoods into moody, nightmarish fantasies. But Seth's It's a Good Life, If You Don't Weaken confronts the emotions behind the pervasive nostalgia. His dominant influence is the gag cartoon of the ’50's: the New Yorker style of Peter Arno and his contemporaries, in which cultured urbanites lightly mocked their own class. Seth's style instantly conjures up the understated gentility of those artists, their spare, curved lines and solid gray shading. It makes sense, then, that It's a Good Life is the semi-autobiographical story of Seth's attempt to track down Kalo, an obscure cartoonist who published one New Yorker cartoon and a handful of others. But what we learn of the deceased Kalo shows a man for whom cartooning was a potential career but hardly an obsession; every person Seth interviews about Kalo knows little to nothing about his cartoons. Seth, meanwhile, can't stop talking about cartoons. His own solitary life stands in harsh comparison to Kalo's, particularly during his lengthy, introspective monologues, when his nostalgia grows cynical and obsessive, buffered by fine-grained descriptions of old Peanuts strips. Separating Seth-the-character from Seth-the-artist are several multi-page interludes of wordless, panoramic tableaus, including a virtuoso, Japanese-influenced sequence of the transition from winter to spring. Seth's pursuit delves so far into comics history that it occasionally risks marginalizing itself; but beneath the nearly self-reflexive arc of the story and artwork are two individuals at opposite ends of the comics world, who both stand before comics as an impenetrable thing, a field that can't hold the fulfillment they are restlessly seeking. For all its ties to comics minutiae, It's a Good Life comments on the arbitrary, chaotic creation of one person's nostalgia, and on how a single cartoon of a man standing in the rain in his underwear can come to contain the hope that, as Dennis Potter put it, "Those times can be recaptured."