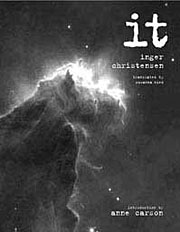 It seems rather ludicrous to dredge up the name of the silent film star Clara Bow—known as the original “It Girl”—in connection with the great Danish poet Inger Christensen, but in 1969, at the time of the publication of her important collection of poetry det (the Danish word for “it”), Christensen might have herself been so described. Although literature has a less immediate impact upon popular culture than film—certainly Christensen did not triple the national sales of henna (Bow’s hair was an unnatural red), nor start a craze for heart-shaped red lips—the author did alter the whole of Scandinavian literature and bring major changes to the writing of her nation that is felt among younger poets even today.

Furthermore, coming as it did at the end of a decade known for its social, political, and sexual upheaval, Christensen’s work was very much about love—and a great many other things. Anne Carson, writing in her introduction to the new English language translation of it, suggests one must understand this work within the context of figures such as John Lennon and Yoko Ono, James Brown, Allen Ginsberg, and Valerie Solanas (of “SCUM manifesto” and attacking Andy Warhol fame). Translator Susanna Nied writes of its immediate and later effects:

On its publication in 1969, det took Denmark by storm. It won critical praise and became at the same time a huge popular favorite. It was quoted by political protesters and politicians alike; lines from it appeared as graffiti around Copenhagen; some parts were set to rock music and became esoteric hits. When portions were translated into German, det brought Christensen international critical acclaim. Today, over thirty years later, det is considered a seminal work of modern Scandinavian poetry. Some of its lines are so familiar to Danes that they have slipped into conversational use. For example, the journal of Denmark’s city planners took its title, Soft City, from a line in det.

Of equal fascination is that this popular and moving document depicts the beginning of life grown out of nothingness, a kind of cosmology of life on earth that is structured, as are many of Christensen’s works, according to systematic numeric units that could only be matched by the Oulipo writers of France. The work overall is divided into three sections: “Prologos,” “Logos,” and “Epilogos.” The “Prologos” is broken down into eight sections, the first consisting of one poem with 66 lines, the second of two poems of 33 lines each, the third of three poems with 22 lines each, the fourth of six poems of 11 lines each, the fifth of eleven poems of 6 lines each, the sixth of twenty-two poems of 3 lines each, the seventh of thirty-three poems of 2 lines each, and the final of sixty-six poems of 1 line; each line in the original Danish publication represents 66 characters. In short, as the number of poems in each section increases so does the number of lines decrease, creating a kind of double helix pattern, the very essence of DNA or life itself.

The central portion of the work, “Logos,” is organized into three sections, each with eight subsections of eight poems, the eight poems in each section titled “symmetries,” “transitivities,” “continuities,” “connectivities,” “variabilities,” “extensions,” “integrities,” and “universalities”—grammatical categories Christensen borrowed from philosopher Viggo Brøndal (in his A Theory of Prepositions) which, as Christensen wrote, express the various “network of relationships that writing builds up as it goes along. From his book I chose eight terms that could stay in a state of flux and at the same time give order to the indistinctness that a state of flux necessarily produces.”

The final “Epilogos” is a long screed of 515 lines, a language after language, that alternates between a sense of despair—

to conquer the fear
of informing others of
your conquered fear
it’s theirs
Eccentric attempts
when a man
steps out of himself
steps out of
his daily life
his function
his situation
steps out of
his habits
his peaceful
condition
we call the process
ecstasy
....................
when he says
that he is dancing
with the Earth
hanging limp
between his legs
and when he summons
the sea
to rise up
and spurt from his organ

It is indeed this alternating pattern, the wonderment of life itself—the fact that our being has come out of nothingness and the recognition “it” will return to nothingness that functions as Christensen’s engine for meaning in the poem. The bleak reality she expresses near the beginning of “Prologos”—

It’s burning. It’s the sun burning. For as long as it takes to burn a sun. As long before and as long after times measurable in terms of life or death. The sun burns itself. Will burn up. Some day. Some day. Intervals to whose lengths there is no sensitivity. Not even a tenderness. When the sun goes out, life (death) will long have been the same as it ever was. It. When the sun goes out, the sun will be free of it all. It. That’s it.

—is juxtaposed with a stunningly lyrical and joyful cataloging of the human race and their various activities as they wait for the inevitable death. And although Christensen’s humans are presented abstractly as “they” and “someone,” we begin to sense by the end of “Prologos” their possible interconnectedness with one another:

They wait in gymnasiums, riding schools, public pools. Wait in cars and ambulances, emergency rooms. Wait and wait in operating rooms and on respirators, in deeper chemical sleep oblivion hushed.

They wait in barracks for draftees and conscientious objectors, contagious illness and poverty. In control towers, on permanent commissions, in supersonic transports. On security councils. Launch pads.

Despite her obvious fears, Christensen bravely moves forward with the flow of these beings, transforming the general fears she has for the human race to very personal admissions, a sudden first-person expression of her own fears and loves. By the time she reaches the fourth section of “Stage” in “Logos,” the abstract pronouns have switched from the general to the specific as she admits her own methods and the fears behind them:

And I wander where I will. And I stand completely still. That way I get used to being dead.

It is this utter honesty, her willingness to face the “dog’s bray,” that ultimately makes it such a glorious work. Her need to reach out to her fellow beings, to convert her fear to happiness (“Happiness is the change that comes over me / when I’m afraid”) leads her into the social, political, and sexual spheres of experience. Throughout Christensen’s career she has been notably anti-war, and in det she vents her angers and frustrations concerning the “stone-hard” society that sends soldiers to “improbable places,” to “further the interests of wealthy cartels,” in process mutating human genes—the helix structure with which she has begun her poem—by converting “their semen” to “superheated TNT.”

Such hyper-sensitivity to life, combined with her self-acknowledged fears and her sense of being “alien,” all lead the author to speak throughout much of the poem—particularly in the “continuities” section of “Text”—about the psychological conditions of people institutionalized: patients in mental hospitals, workers in factories, soldiers in barracks. The repeated phrase “So I don’t think he understood me” serves almost as a talisman to make sense of a mad world that often points to its prophets as being insane. Here in particular Christensen reveals a wry sense of humor:

Today all the patients agreed to say it was snowing. We all took our places by the windows and pressed our faces to the glass and exclaimed joyously over the snow and described it and dreamed about how wonderful it would be to play in it. Meanwhile the sun was shining away and the doctors got confused by our total agreement and couldn’t figure out if they should act like they were crazy and say it was snowing or act like they were crazy and say it wasn’t snowing… But it really doesn’t matter. Because the press showed up and took pictures of the employees running around and throwing snowballs and sledding and making snowmen and rolling each other in the snow. In the newspapers it said that all the employees had gone crazy.

It is this kind of viral craziness, Christensen makes clear, that is necessary to save the world. For these are the lovers “who catch it / any and all / all who / are enthroned on the pillar of despair why not.” It is only through a parallel, non-rational language, the poet argues, that one can tell how to “waken the dead”:

Given the fact that the original “It Girl” spent most of her later life in mental institutions suffering from schizophrenia, perhaps the distance between this Danish “it” girl and the sexy silent film star is not as vast as one might have thought.