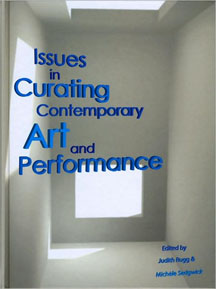 Issues in Curating Contemporary Art and Performance presents itself as a forward-thinking topical discussion around the blurred and often contentious lines between curator and artist. On closer examination, though, and with a bit of detective work, it reveals itself as simply a good reference guide. For example, the word performance in the title doesn’t refer to performance art at all, but to dance—which are, in contemporary art vernacular, two distinctly different things. While anticipating a manifesto or at least a heated polemic, we get a tame directory instead.

Gathered from a 2004 symposia in the UK on curating as a form of critical intervention into culture, this collection of essays by twelve British curators who operate from centrist institutions such as the Tate and the ICA (Institute of Contemporary Art), is polite and well-mannered. Each essayist briefly presents her own position, and then describes a single curatorial project at length. Few step into a larger conversation about subverting the curatorial model altogether, a hot issue currently of heightened significance.

In The Movement Began with a Scandal, Alum Rowlands outlines in great detail a discursive project “inside which the protagonists engaged in a process of temporary positioning” within one of Munich’s major historical collections. Here, twenty contemporary artists aestheticize social relations within the museum to produce institutional critique, much like Cornelia Parker coiling a mile of jute around Rodin’s bronze sculpture The Kiss. However, Rowlands fails to extend this line of thinking outward from his particular projects to the larger scope of global curation, keeping everything contained nicely and in perfect explanation. (I was, admittedly, reading Issues in Curating alternately with The Invisible Dragonby Dave Hickey, the opinionated cultural critic who is equal parts stealth and acuity, piss and vinegar, and who makes most writing seem comparatively tepid.)

This collection of essays initially feels like a defense of the curatorial practice, but eventually achieves a cumulative definition of the curatorial role, including discourse and research methodologies. Each essay describes a play-by-play of several projects of specific ownership, often going into great detail about why, say, a particular title was chosen for an exhibition. When positions are finally stated, we are left without the meat of a continued, broader conversation. The book is thorough in its assessment of the global rise in curatorial prestige in the 1990s—the curator as “jet set flaneur”—and the quickly-mounted rash of international biennials, which has created a culture of the curator as a visionary and her collection of artists as mere material. But Issues in Curating does little to follow up on the serious ramifications of these power-shifting events.

The curator’s role has arguably changed more drastically in the last fifteen years than that of the artist, and Issues in Curating skirts its inherent challenge: how to place itself within a rapidly changing situation. These essays were written five years ago in Britain, just after the UK had received unprecedented exposure from the global YBA (Young British Artist) craze. This “movement” was championed by one gallerist—the advertisement tycoon Charles Saatchi—and he let the artists do the talking. The Brits have held a grass-roots model since 2000, wherein many unknown artists enter immediately and remain in loose collectives that hold their own exhibitions, sometimes attended by curators and gallerists. A wellspring of artist-driven alternative spaces have established themselves: Cell Projects, for example, an upstart project space in East London, has on its expansive, mixed roster the acclaimed young artists Liam Gillick and Ian Monroe, the latter of whom is in its current group show.

One of the writers, JJ Charlesworth, does consider how the art world has become bureaucratized by the rise of the super-curator, creating a new managerial class where the artist has been displaced, but he doesn’t put that notion into context or examine actual occurrences where the margin has not been co-opted, as in the Cell Projects example. He merely makes a point, though performs quite well in doing so. As Paul O’Neill writes in his theory-laden essay, “the periphery still has to follow the discourse of the centre. . . . and, by default, accepts the conditions of this legitimacy.” If indeed the artist has been displaced, as Charlesworth considers, O’Neill contends that in buying into the system created by the super-curator model, the artist perpetuates his own displacement. However, they both turn a blind eye to many examples of artists bucking the system, even in the face of the super-curator reign. He offers no punk rock solutions, or any solutions at all, though they are already happening around him.

Once Issues in Curating reveals that it is shirking its mantle of actual comparative discourse, moments of thinking outside the box peek out. Jane Rendell’s chapter on critical spatial practice, interweaving curating, architecture, editing, and writing, is refreshing and eye-opening. She demands that we “exchange what we know for what we do not know, and give up the safety of competence for the potential dangers of incompetence.” Her approach to what she calls the “diagonal axis” of working in multiple disciplines demands we always work in “a place between”—the real lived experience of those who remain on the blurred line of curator/artist, editor/writer, critic/theorist. She presents a practice called “site-writing,” a way of re-thinking criticism, which involves repositioning the artwork as a site for critical spatial writing. Framing criticism as “an active writing that constructs as well as traces the sites between critic and writer, artist and artwork, viewer and reader,” she suggests “that the position the critic occupies needs to be made explicit through the process of writing criticism.”

Rendell’s ideas stem from Alain Robbe-Grillet’s radical literary movement described in Towards a New Novel (1963); crossing them from fiction into criticism and critical theory, she hypothesizes the ideas of relational aesthetics and dialogic practice as a curatorial and critical form. Finally, a provocative gesture, attacking from the flank: fiction as critique. As I read Issues in Curating, I watch myself getting thrown into Rendell’s eloquent meta-loop, like a multi-layered Charlie Kaufman narrative in which we are complicit; this book is now suggesting to me how to critique it. Trying my hand, a Rendell site-writing/criticism for Issues in Curating might go like this:

The walls in this room look like they are covered in loops—but up close it is possible to see that these are figures, lots and lots of small numbers. These are financial indices, specific quantities with particular functions, which appear here as surface ornament. On one wall is a window with four panes. In one corner, two sofas are placed at right angles to one another. A video monitor stands between them. The video rolling by is of a blonde man in his mid-thirties wearing thick black-rimmed glasses. It is continually framed in a medium-close up. He describes in slow, minute detail a completed project in a German art museum. On one sofa art catalogues and CVs spill across the cushions. Through the window next to the monitor, in the street outside, five artists are in a huddle, planning, one with a blueprint rolled up and tucked under her arm.