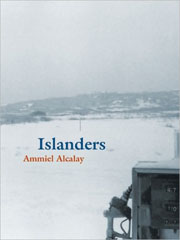 Islanders opens with a man seated at a table, lost in memory, thinking about writing a story. But as he listens to an older woman reminisce about hearing War of the Worlds on the radio, he considers the ethics of writing anything at all:

Two stories he had read years ago stuck to him . . . he thought about the men that wrote them, saw the men themselves, in long overcoats with cigarettes, hunched over coffee in some diner . . . completely removed from what they were writing about, the people they wrote of never imagining they were being written about, the idea that someone was recording the facts of their lives . . .

Ammiel Alcalay disrupts every attempt to sustain memory, to make Islanders into a story; other memories always intrude to displace characters and location. The story becomes that of the act of remembering itself. First, there is childhood and a girl, a playmate to wrestle with and run after, a succession of rundown schools where classes are often skipped. Later, there is an island and a decision to stay through the winter. A shack below the hill and a girl named Josie and her father Casey and her dead brother Lee who went off to war. There are work buddies, drinking buddies: Abe, Nap, Eric, and Caldwell, the guy Sam worked for. There’s an accident: Nap shoots a hole in the palm of his hand while duck hunting. And work, it’s always about work and its camaraderie, work that involves the body and engines: classic cars, fishing boats, trucks. A remark that “he never minded work” recalls Alcalay’s 2007 book Scrapmetal and its interruptive litany of jobs, ones the author held before becoming a professional writer and intellectual.

A “steady fog” envelops almost every scene in Islanders, diffusing the narrative. One might call this the fog of nostalgia, except that it heightens rather than diminishes the hard facts of the past; the fog of memory is also the fog of history and war. In both the hardscrabble fishing villages and the worn-down cities of the Northeast, many of the slightly older men wear army jackets, indicative of where they’ve been. Boys and men go away. Some come back. Some don’t. Some go to war (unnamed, but we know it’s Vietnam, because we’re shown a tacked-up clipping eulogizing Louis Armstrong, who died in 1971). The word gone takes on both the sense of gone off (to war, to work, to the city; never to college, ever) and of dead. Finally, there’s the gone of abandonment: parents neglecting children, husbands leaving wives, friends and lovers forgetting to call or write: “Soon after that Abe, Barbara, Seana, and even Isaac moved to the country. Jessie too moved with her father who went from place to place. She came back every now and then but that stopped. Sam wrote to her every now and then, but that stopped too.”

The slide toward violence in Islanders, particularly on the part of drunken fathers, ultimately defeats nostalgia, and everything funnels toward two short tales near the end. In one, a boy, is wasting away from malnutrition until finally he is thrown out of a boat and left to drown, presumably by his father or older brother. In the other, a boy is stranded on a buoy by his father, punished for having asked about the reindeer that some boys claim to see in the red and white lights blinking offshore. Patriarchy run amok (“The other brothers had abandoned him . . . The new boy was his, all his, and he kept him close whenever he could”) ultimately defeats both father and son. The boy’s fate, his fatal predicament—he does what his father tells him to do, because he is his father—brings to mind Cydney Chadwick’s “Routine” from her collection Flesh and Bone, in which a father repeatedly throws his son headfirst down a staircase to toughen him up for a trick. In Chadwick’s tale, however, the boy, Buster Keaton, gets so good at the performance that he finally upstages his father. In Alcalay’s version, there is no such way out.

This isn’t an upbeat book. Its beauty is as stark and obscured as its fog-shrouded coastal setting. If Ammiel Alcalay’s Islanders is an account of the search for intimacy—and it is—it is the intimacy of violence, betrayal, and loss as much as that of friendship and sex. There is no real arc to the storytelling; it just goes on and on. Thus, the end of the book might just as well be its beginning: “Will you wait? Will you be there when I get back? Will you wait? I’ll always only go a minute.”