Despite their differences in age, lineage, and poetic temperament, these three poets, and especially these three new collections of their poetry, have much in common, and provide an exemplary overview of what’s happening at the cutting edge of avant-garde contemporary American poetry. All three poets have been greatly influenced by the New York School and Language poetry, as well as by the Black Mountain and San Francisco Renaissance poets. A common denominator that runs through all three poets’ work is their use of montage and pastiche, extending and refining the techniques originally employed by the Dadaists and the later cut-ups of William Burroughs and Brion Gysin, as well as Ted Berrigan’s great cut-up masterpiece, The Sonnets. (Indeed, the presence of the late Ted Berrigan seems to hover over the work of all three poets.) Another shared legacy is that of the Language poets’ foregrounding of the material aspects of language while moving the concept of an authorial “I” to the background, sometimes eschewing the idea of a central narrator or even a linear point of view in its entirety. On the other hand, all three of these poets are also comfortable with first-person narrative monologues, proving that they are not locked into any particular poetic dogma or regime. In this era of post-postmodernism, the perception of language, both as material and vehicle, has gone through many changes, and these three poets are acutely aware of those changes, as evidenced by these three new collections. 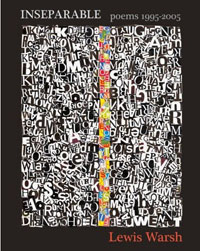 Lewis Warsh’s Inseparable collects ten year’s worth of work into a single volume, bringing together thirty-five mostly longer, multi-part poems, some of which were previously only available as small press chapbooks. Warsh primarily works with longer sentences, written in a straightforward, deadpan style that often approaches the non sequitur, combining these into longer stanzas in which shifting pronouns, characters and points of view—oscillating between the deeply personal and the impersonal—force the reader into becoming a co-creator of the text. Despite Warsh’s use of line breaks and enjambment, these are prose poems in the truest sense, as the long lines build up to a linguistic entity much greater than its parts. The wending way of the lines, always turning away at the first sign of possible closure, often remind the reader of the forward-jumping anti-logic and fascination of a dream, yet are firmly grounded in the author’s own “dailiness,” as we see in “Reversible Destiny”:

The guy pointing a gun against the side
of my neck was sucking on a lollipop. To
talk out loud about what you’re feeling
precludes the idea that someone will understand.
Talking to yourself defeats the purpose of
being alive. Only the ego thrives in solitude.

While there may be an emphasis on the textural nature of the language, Warsh’s poems are by no means superficial. In “Ten Years,” one of the more memorable pieces in Inseparable, the author reflects on a ten-year block of time in which he delivered and picked up his kids at the same school each day. He sees himself, almost as a ghost, sitting on a bench reading the paper, smoking, writing poems, standing around in the street talking to friends, or going to get ice cream with the kids, each memory triggering yet another. This catalog of past experiences becomes a meditation on the passing of time and the exigencies of transience, a heartfelt contemplation of Proustian nature. Other poems are more abstract and opaque by nature, but never fail to provide apertures that give way to the deeper concerns of self, sexuality, desire, and mortality. Reading these poems sequentially in this generous collection is sometimes like reading a long, eloquent novel, with its various characters, points of view, and planes of action—which is in part what gives Inseparable its substantiality and strength. But beneath the surface of Warsh’s circuitous, self-reflexive lines lay the unmistakable rhythms and cadences of true poetry. 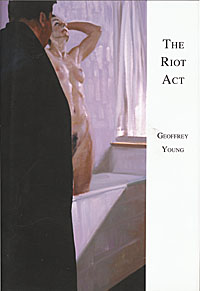 Geoffrey Young’s The Riot Act, with its elegant cover painting by Eric Fischl, is divided into three sections: “Why I Don’t Write Novels,” a selection of thirty-four sonnets; “Conversion,” a selection of twenty-one short prose pieces; and “Up the Wazoo,” a final selection of “occasional” poetry in various forms, formats, and lengths. Young’s sonnets are dense, fast-paced, and bristling with energy; they sample and collage various tropes and sound bites from Young’s internal and external worlds, mixing up his own interiority with fragments of contemporary culture. The pacing, tempo and improvisational nature of the sonnets is often that of a jazz saxophonist leaping up to blast out an inspired solo, as in these lines from “The Drop-Dead”:

The short prose pieces in the second section are compact vignettes often of autobiographical nature and delivered as straightforward narratives, but cleave to the poetic. “Flashback” is about Young’s accidental witnessing of a brutal wino-bashing in lower Manhattan, and how he then helps the battered, bloody wino into a cab and off to the hospital, where Young then anonymously disappears into the night like The Lone Ranger. In “Cleanest,” the author tells of attending a concert by The Band at Williams College and a chance meeting in a men’s room with Richard Manuel, the keyboardist, just a year before Manuel hung himself in a Florida motel bathroom. Both of these moving pieces reside in the memory with indelible clarity, despite their briefness. In the final section, “Up the Wazoo,” Young travels all over the place in style, format, and approach, his poetic sensibilities bouncing off a wide range of material, from the free-association of “On the Liz Willis Bridge” to the more straightforward yet comic eroticism of “The 97th Kentucky Derby” to the grand finale of “Can’t Get No Whole One Blues,” a reworking of Gertrude Stein’s The Making of Americans with line breaks and enjambment provided by Young, emphasizing the lyrical nature of Stein’s quirky prose. 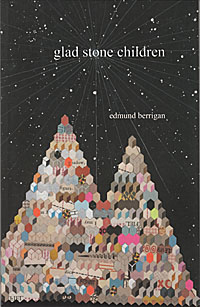 Edmund Berrigan’s glad stone children continues in much the same vein, collaging, cutting up and juxtaposing, while at the same time pushing syntax and grammar to the extreme farthest corners of the envelope. Whereas Warsh’s main unit is the longer sentence, and Young prefers the shorter sound bite or colloquial tropes, Berrigan collages single words within the sentence or line, altering their context, changing tenses, declensions, and endings, and making up words as he goes along, coming up with combinations that are both baffling and humorous (“Disturningly” is the title of one poem). Berrigan is apparently fearless when it comes to twisting and distorting the language in order to achieve his various effects, his penchant for indeterminacy sometimes reminiscent of John Cage. Here in its entirety is “Somewhat Slug”:

I found my jaw on my face today.
Walking into the llama portion
of bicentennial alarmism
somewhat disgruntled frumping
into a deeper sense of generous torchside
ashtrays built out of opium and shoeshine
that took out a mortgage on the future of
petrol and centralized amnesty from fact.
How can you stand to keep the mirror in the shades
of sordid bucolic pieces carved into a
polaroid Pyrrhic victory?

It’s difficult to surmise just how much the younger Berrigan has been influenced by his father, and it may be a moot point in the end. But one can’t help see some direct parallels in the way both Berrigans approach the language, with their enthusiasm for taking the willful distortion of language as far as it will go while still remaining true to the “poetic,” and never losing touch with their unique brand of humor.

Together these three collections show that the postmodern aesthetic is much more than the reputed “death of the author” or Fredric Jameson’s “death of expression.” On the contrary, what we see here is a serious determination to question poetic and narrative forms, along with a playfulness and sense of experimentation that opens up the possibilities of language, in ways diametrically opposed to the mainstream models of contemporary American poetry. Whether in the self-reflexive discourse of Warsh, the vibrant juxtapositions of Young, or the mutable modalities of the young Berrigan, we see here three decisively different poets all deeply engaged in the material and procedural aspects of rhetoric, bringing home the true meaning of Jack Spicer’s adage: “Where we live is in a sentence.”

Click here to purchase Inseparable at your local independent bookstore