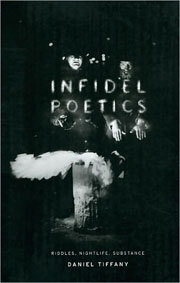 We have known for some time that many forms of literary difficulty—Mallarme’s “L'après-midi d'un faune,” Hart Crane’s logic of metaphor, Dickinson’s punctiliously precarious similetic dilations—ask to be inhabited as such. Daniel Tiffany’s new critical book not only returns us to the scene of lyric obscurity, but provides a rich genealogy of adjacent and atavistic literary forms (the ancient Greek rhapsode, the Anglo-Saxon riddle) that advances a phenomenologically textured and theoretically persuasive account of such obscurity. The ambitiousness of Tiffany’s argument is exceeded only by the dazzling success of it. To simplify the logic of Infidel Poetics risks recapitulating the exegetical critical moves it so eloquently abjures, but for the sake of this review, I’ll attempt precis, with the wish that readers provoked, inspired, or suspicious of the precis will turn to Tiffany’s own nuanced words for further provocation.

Infidel Poetics—at once meditative, exhaustive, and elegant—arises from its own reorientation toward different objects. We are used to thinking about the materiality of writing in certain ways, with textual opacity too often taken as an impediment to the givenness of the empirical, as though lyric lucidity were more immanent and therefore more materially available than the intangible withdrawing of obscurity, whether in the form of riddles, thorny dialect poems, or the oxygenated fragments of contemporary poetry: of Jorie Graham’s “rhapsodic materialism,” Tiffany writes that “elements of lyric substance (air, light, dust, moisture) achieve their most comprehensive form in the nebulous and dynamic bodies of the weather.” Following the likes of Leibniz and Lessing, Tiffany rescues poetry (and by extension,everything) from the reductiveness of materialism in formulating the latter more specifically as a metaphysics of materialism. Materiality, from this vantage, becomes as vexed a category as Jamesian fiction, in which “psychological realism” less describes a resemblance between characterology and subjectivity than the dubious ground from which flowers James’s own most extravagant lyric productions. It isn’t that a character’s psyche is mimetically discernible, per se, but rather that psychical hap enables figurative flourish and transformation. To move from the Jamesian novel back to lyric poetry, Tiffany’s suspension of materiality recalls Allen Grossman’s brilliant account of Hart Crane’s particular realism. Echoing Grossman, Tiffany suggests that “the modern fragment is not a property of the verbal artifact but rather the product of a state of mind, a form conferred upon language (which is itself a medium) by reflection.”

Obscurity makes writing (whether lines by Wyclef Jean or Baudelaire) seem more material, to the extent that the unavailability of easy transparency forecloses our relation to what the writing is (which is to say, normatively speaking, what the writing would be saying were it clearer). At the same time, as the above already suggests, obscurity makes writing seem less material, insofar as occlusion means we feel so much less substantively what we are holding. This simultaneity of saturation and evanescence—more simply of substance and insubtantiality—is perhaps most heuristically evident (as it were) in G. E. Lessing’s account of invisibility in The Iliad. When Homer’s gods rescue their favorite warriors from battle, they often do so by rendering the warriors invisible. If invisibility itself were textually viable, however, there would be nothing to see—we wouldn’t be able to see invisibility. Homer thus describes invisibility in terms of being shrouded in mists, clouds, darkness. “Hence,” Tiffany writes,

the reader comprehends the effects of the verbal emblem of darkness. . . . Since the substances—air and obscurity—enveloping the endangered mortal in the trope of disappearance may be understood as figures for the meteoric phenomenon of the poem itself—for the rhapsodic “air” and its rhetorical darkness—one must conclude that the obscurity of poetry in general is likewise a “hieroglyphic,” a substance, to be deciphered (not for its content, but for its expressive and pragmatic effects).

Recourse to Lessing and to Homer might suggest that Tiffany’s philosophical and classical spelunking further shores up what we thought we knew about the esoteric origins of textual impediment: our subliminal but abiding sense that a poem’s epistemological (rather than material) hardness surfaces as a certain modernist elitism, in calling attention to what we do not know. Tiffany’s turn to Ancient Greece (and early modern England), however, overturns this narrative of scholastic cliché by locating the epistemological peripherality of difficult writing in the cultural purlieus of the vernacular. To think of textual aloofness in terms of ghettos rather than ivory towers recalibrates our estimation of both subculture and literary commodification alike. In the case of medieval England and France, cant ballads are obscure not for the sake of some baroque aspiration unto itself, but logistically, because these texts aim to safe-guard the communications of beggars, thieves, spies. The legal and more broadly sociological implications of textual aloofness turn recent critical notions of cultural context on their head. Obscurity, that is, doesn’t prevent our understanding of a poem’s context: it is context.

Again, Infidel Poetics achieves this intervention in historicism in its particular orientation to the ostensible problematics of poetic fatality—specifically, that which is evinced in that early minor literature of textual obscurity, the Sphinx’s riddle. Tiffany’s interest in the riddle lies on the side of the Sphinx herself, rather than the ambivalent but ineluctably civilization-making side of Oedipus, the riddle’s “solver.” Like other ancient rhapsodists for whom vagrancy describes the errant wander of riddle and riddler alike—Tiffany notes that Odysseus’s nostos refers to both return and the song of return—the Sphinx potentially reminds us of an enigma in modern art which for Adorno is nothing less than constitutive.

Indeed, there can be little doubt that the citizens of Thebes, plagued by the “glaring,” random minstrelsy of the Sphinx, existed in a state of terror prior to the achievement of Oedipus—not unlike the citizens of a modern city terrorized by a serial killer before his (or her) capture. As a poet, the ancient Sphinx may thus be compared to the riddling serial killers and cryptographers of modernity (the Zodiac Killer or the Unabomber), each producing a vernacular strain of “poetry” (in their cryptic letters to the public) recalling the apotropaic allure of the Sphinx and her single, compulsively reiterated poem (akin perhaps to birdsong).

Tiffany’s closing parenthetical—like Lessing’s Homeric mist, a shrouding which at once calls attention to and from itself—recalls, again, Grossman’s distinction between poets who aspire to tell of a bird’s song, and poets (for instance, Crane) who aspire to be the bird’s song. The Sphinx’s siren-song illuminates [sic], which is to say literalizes [sic], Mallarme’s sense of a crisis in poetry, a crisis as beneficently urgent as it is unmooring. Reading Tiffany alongside Mallarme suggests that crisis is where poetry not only ends, but where it begins, as though a storm wind could leave poetry panting on its own original shore. History, here, feels vertiginously implosive; objects serve as their own context and context only leaves us feeling further stranded in there being no more stable exterior for reaching. The Sphinx’s heir is less T. S. Eliot’s macaronic than a homeless person’s can you spare any change, to which we respond, as non-response to the Mallarmean question, I’m sorry.

Over and against the tidal ubiquity of newly published books, the event of a truly new book occurs only rarely, and the newness of the latter’s thought necessarily risks being misapprehended or underestimated, if not altogether lost in the lees of what otherwise counts as new. So new a book would by its own terms strike readers at outset as utterly unfamiliar, willfully tendentious, or beleagueringly tenuous, to the extent that tenuousness marks a reader’s inability to trust ligature and logic that may well exist beyond the reader’s abilities. The delight in discovering, across the time of reading, that perceived tenuity patiently could await its being reassessed as a new and significant lucidity—that an infrastructure already had been in place without one’s registration of it—describes the good fortune of a new book so self-abiding in its convictions that we learn to trust it, such that an earlier sense of unfamiliarity alchemizes into the gratitude of learning where we least expected it. Such is the delight of Tiffany’s truly new Infidel Poetics.