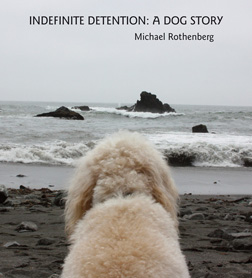 Indefinite Detention: A Dog Story, the new book of poems by Michael Rothenberg, is a lament for the indecencies and hypocrisies of 21st-century America. In these poems, Rothenberg finds humanity consistently failing to meet its potential. Take the title poem, which is haunted by both the ancient past and recent history:

Pillars of Adonis, Zarathustra and Hercules
Do-gooders enslaved at the arch

Wall St. bulls on a golden cable hung from a black hole

Rothenberg sits in judgment of humanity’s failed potential, its obsession/possession with the wealthy and powerful. “How many of the 99% aspire to be the 1%?” he asks, but he insists that human freedom is self-evident, that we have curiously developed our own imprisonments and allowed ourselves to become imprisoned. We need only throw the shackles of this indefinite detention off.

Everywhere in these poems, one senses the poet’s need to capture the zeitgeist of the era. In “: The Perfect Art,” Rothenberg writes of

The misrepresentation of juxtapositional occasions
without belonging

The pride, the reinstated
The rejuvenated suburbs of ancient arts

The elegant repressions, the sun and sky

There are moments here of lyric fatality, the poetic urge of chronicler to tell the tale of the tribe. Yet Rothenberg is not always successful. At times, the poems are little more than lists; lacking a radiant node, they buckle under too many legs, as in these admittedly musical lines from “Ode to Tralfamadorian Goose” (a reference to Kurt Vonnegut's Slaughterhouse Five):

Longer poems are interspersed with shorter poems, and in general the longer ones are more successful. The shorter poems are imagistic, expressionistic, and yet mostly lack a musicality far more apparent in the freewheeling longer poems that make up the bulk of this book.

The dog of the book’s title is an ongoing metaphor for the promise of the human soul, of duty, dedication, and the love and of freedom. Apathy dogs the poet—apathy toward human potential, towards nature, towards animals—as well as disgust at humanity’s bloodthirsty destruction in the expression of war, as in “Poem for Mitko”:

I asked the California badger
on the road back home
Do you find this dream amusing?

There was something vicious and his response
Is the human condition just entertainment?

These are poems that risk insanity, poems that refuse to look away, poems that accept responsibility, poems of utmost sincerity. For the most part the poet’s humanity shines through, rescuing those drab, flat moments that might otherwise seem unremarkable. Then there are moments that strike like lightning, clusters of new particulars.