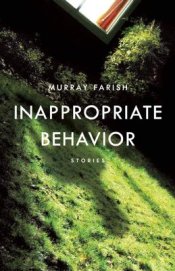 Inappropriate Behavior, Murray Farish’s first story collection, draws in the reader with a personal style and gets increasingly weirder until the finale flickers out. The narrative of each individual story is brimming and tumultuous, filled with recognizable people and places that find themselves on the brink of insanity. Farish is a professor in the St. Louis area, and readers will identify with the Missourian brand of backwoodsiness in “Mayflies” as well as the universal graduate student doldrums in “The Thing About Norfolk” and “Charlie’s Pagoda.” Every character encounters some sort of modern-day resistance that prevents him or her from perceived fulfillment.

Farish’s stories aren’t humorless, but they do show humanity through the narrow lens of desperation, which can be draining at times. Characters like Perkins in “Ready for Schmelling” witness unexplainable absurdities (in his case, upper management acting strangely), but the consequences of such spectacles are irrational. Obsessions constantly triumph over rationality, like when the main character in “Lubbock is Not a Place of the Spirit” beats up an old woman in the street because she threatens his confused reality. There isn’t much of a resolution for most of these stories; readers have to reach for meaning, much like the bewildered, stumbling characters.

The title story, which is the final story in this book, drips with gory detail but is otherwise representative of Farish’s work as a whole. Here the Putnams, drowning in debt, struggle with their abnormal son Archie and come to an ending as depressing as it is inconclusive. Yet the way Farish juxtaposes the playfulness and discomfort of Archie’s mentality is so haunting that readers will ignore the fact that it leaves so many open-ended questions.

One interesting aspect of Inappropriate Behavior is its penchant for interconnecting themes and subject matter, such as stalking to the point of court-ordered therapy and the assassination of John F. Kennedy. Farish depicts the Midwestern landscape—and by extension, the world at large—as a vortex of negativity and uncontrollable urges. Delicate storytelling connects the outwardly picturesque lives of these characters, and in different dialects and cadences, a consistent message repeats: the human spirit is both easily warped and eternally resilient, a combination that proves beneficial to disaster.