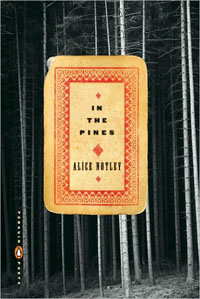 Alice Notley’s latest collection, In the Pines, begins and ends with questions. Like her previous work, it challenges preconceived notions about poetry; Notley not only deconstructs language to push against patriarchal presumptions, but her writing deliberately blurs the line between poetry and prose, forcing one to concentrate on the writing rather than one’s ideas about the writing.

The eponymous prose poem concerns many subjects, including the fragility of mental stability and the differences between men and women. At times the narrator appears to be a character named “no one” who wonders whether her mentally ill siblings share “defective” genes. The sister in the story is in the hospital, and we learn about her attitudes toward “the needle,” a word with an obvious double meaning:

You find the needle repellent. He found it dramatically ambivalent. For me it had no qualities.

For me, I myself have hardly any characteristics.

I sometimes have them in my dreams. The story is false. Why is the story generated? For beauty’s sake? For the sake of making a thing of besides fire and light?

Notley’s poetry employs many popular song lyrics, inviting one to speculate about her own relationship to the songs that recur. Here, the titular reference to Leadbelly could just as easily apply to Nirvana’s chilling cover of the song for their “Unplugged” television special, a performance which took on morbid associations following Kurt Cobain’s death. One of the characters is described as “lying there leaking songs.” The prose poem is a delicious kind of puzzle, and as we are warned, “If you don’t know the song, you don’t know anything.”

Songs are presented as a part of the genetic code, and the key to understanding both one’s own mind and the poem. The song will help one “find your soul,” but “do you want it?” In the pines, “everyone’s composed of their losses, they are purely negative. . .” The sister sings:

Under that layer of shit
am I
am I.

The fifth section of the poem asks questions about the nature of love, identity, and property. The sister’s madness is compared to Leadbelly’s, and the pines become a metaphor for the increasing instability of the narrator; she asks “how far gone / into my defect / am I?” Meanwhile, Leadbelly’s iconic “Irene” becomes the “goddess of compassion,” but her power is questioned. Somewhere along the way, the narrator finds herself “losing the because.”

Notley constructs multiple layers of conversation, sometimes talking to herself, or perhaps to other writers who aspire to innovation: “don’t show your change.” Is she encouraging us to switch narrative voices without warning? Notley may be the sister, or the narrator, or both. In any case, a linear or rational approach to understanding the events in the story may not help.

In the Pines is a psychologically and linguistically complex invocation that tears away the veil of separation between men and women, body and mind, and other dichotomies. At one point, we are told, “You have left the world of the mind-body problem and entered the world of symbols.” These include the tarot. The narrator expresses a fear of love; someone, perhaps a doctor, “is trying to read me.”

The poem also addresses the danger inherent in being idolized and made to symbolize womanhood: “You can be cut up by any man’s ideas.” The goddess laments that she will die without having “seen the fall of male power.” As the poem draws to a close, we are provided with some clues as to the identity of the narrator:

I was born to be your poet. I am the woman, your poet. All that I am.

She just did what she had to do.

Who else can do this? No one. Any no one who cares to, and the eyes above, where I have been, approve.

But can she be trusted? The mysterious narrator tells us, “I prefer the live versions. The performance of the search for the soul.” The poem ultimately ends in the “boughs where the shamans come to life,” a place the narrator prefers because “the tree of the shamans” is “the tree of life.”

The second section of the book, “Black Trailor,” is about ghosts, lost love, and the suffering of humanity. The title poem is “a Noir Fiction” murder mystery told from the point of view of the corpse. “Conspiracy” is a great piece about the stories we tell each other about our neighbors, trying to guess who might be a serial killer. As elsewhere, the use of the first person makes it tempting to read certain lines (“I wanted to be famous”) as autobiographical, though this would be a mistake. Notley is also a master of the unexpected turn-of-phrase, as in “Locust:” “Maybe I was too tried.”

The final section, “Hemostatic,” contains the most abrasive material in the book; here the dead converse with and interrogate their live counterparts. In “You Have No Idea,” the poet argues with the dead, who ask her questions she can’t answer. The final lines of the final poem leave the reader with additional questions to ponder:

over the washed-out places
I fell in love with, singing.

Could I?
Does one?