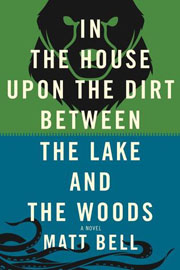 Matt Bell’s debut novel begins with circumstances both familiar and strange. Newlyweds move away from their families to a distant land. There are no other people there. The new geography consists of a woods and a lake and, between them, a “dirt” or field of earth. As the title of the book suggests, the couple sets up house in this intermediate space. Or rather, the man builds the house, cutting down trees and using them to give the house structure, while the woman (referred to as “my wife” by the unnamed narrator) furnishes it by singing songs: “she began to sing some new possessions into the interior, and between the lake and the woods I heard her song become something stronger than ever before.”

At least four points can be made about this startling sentence. The first is that the writing here, as elsewhere in the book, stops short of psychology in service of creating a sense of wonder about things that exist, often using the uncanny language of the fairy tale. The second point is that the wife’s singing is functional; it derives from her nature as a female and wife and potential mother, just as it is a function of the narrator as male, husband, and potential father to do the labor of building. The narrator’s observations of events and behaviors are the novel’s principal means of establishing character, a method that gives the book some of its air of exploration and mystery. The third point is that the wife’s singing is not figurative. She literally fabricates the world around her and both damages and mends both things and beings by using the power of her voice and traditional songs she has learned and created. I don’t mean “traditional” in the sense of folk songs sung to establish an atmosphere of community and dynamic creative spirit—though there is something of that in the wife’s songs—but rather that they possess a practical magical component: “There was a song for the making of the objects by which a household was furnished and run, the bowls and breadboards and spoons and knives and pots and pans.” Singing is the wife’s adaptive, creative activity in the face of the challenges of housekeeping.

The fourth point to be made about the sentence in question is that it is characteristic of Bell’s descriptive style, which is paradoxically vague in the service of greater precision: the song becomes “something stronger” than it has previously been. It is not clear exactly what constitutive elements the word “song” indicates at this point. Is this a tune? A chant? It was just a song before, the kind one uses to usher objects into being, whatever that is; now it is “stronger,” whatever that means. Bell uses this kind of elusive description throughout the book—his narrator has not a stomach but a “belly-hole” and not a mind but a “skull-space”—in order to convey that the world he envisions for his novel is one that sometimes defies description in words that we know. Remember that this is a novel about a man and a woman starting a life together in what appears to be a pure wilderness. This is a story told in Adamic language.

If it is tempting to read the book as an attempt to found an Eden in exile, the storytelling rewards the impulse. The narrator and his wife explore the forest, learning about the animals and plants that live there and the she-bear who rules over them. They learn about the fish in the lake and the squid that presides over them. They learn about the “elements” of their new world, of which there are a finite number, of which bear and squid are two, as well as mother and father and child. The man and his wife learn about the latter three at considerable cost to their bodies and minds, for it turns out that the wife cannot carry a pregnancy to term, and when a child finally does appear, foreboding questions come with it. They learn that the dirt, the forest, and the lake have a secret history. The narrator learns his wife has a secret history and many secrets. He learns his child has a secret history. Meanwhile, he makes and keeps many secrets of his own.

To say more of the storyline would both ruin the narrative arc of Bell’s novel and miss the point of his work; the primary satisfactions of reading this In the House Upon the Dirt Between the Lake and the Woods derive not from its story but from its language and sentence patterns. The book’s investment in poetic compounds (the fingerling, a ghost-son who lives in the narrator and speaks to him) and emphatically literary figures (from mythology, a sterile earth-mother; from mythology-cum-adventure fiction, a bear and a squid) often works to create meditative stillness rather than narrative flow. In other words, this is not a page-turner, nor is it meant to be. It is a novel, a fairy tale, a foundation myth, and perhaps a deeply personal allegory. It is also a faithful transcription and examination of a personal vision, an act that requires no small measure of courage. If the storytelling builds further toward the establishment of tautological tensions between major characters and narrative elements than straightforward deliberations on, say, married life or parenthood, then it does so to explore and answer certain longings and inevitable failures adults experience after escaping (and being cast out from) the paradise-and-hell of childhood.

As for his writing style, Bell does not shy from employing poetic techniques like anaphora and cataloguing, or from using more rhetorically direct techniques, such as framing the narrative as a metaphor within a metaphor, as he does when his narrator introduces interactions and events with the phrase “memory as,” reminding us that his story is coming to us in words which can only shadow and hence partially obscure the worlds—real or imagined, to make a false distinction (since the imagination is as real as any other part of the mind)—they voice. The novel’s study of its own primary elements will be both familiar and welcome to readers of Bell’s previous works, particularly the collection Cataclysm Baby, and, as with that book, the tendency is occasionally to his disadvantage. Bell’s descriptions and word-choices can be strained (“the bear that stood before me now stomped unsteadily on its meat-thin limbs, its fur-torn, bone-sprung body led wobblingly forward by its squared head”). In some passages, he seems more interested in mystifying his reader than controlling a sense of mystery. In others, his preoccupation with an image is cousin to the lengthy account of a dream. Altogether, though, the book’s parts form a dark and weighty mass many readers will find worthy of inspection.

Every generation ushers in a new wave of artistic innovators and movers and shakers, and Bell is sometimes associated with a group of young writers, small presses, and publications that have collaborated to make room for their innovative work. Now the author of two collections and a novel (to say nothing of his chapbooks, other publications, or further accomplishments), Bell continues to develop his project in his own way. It is a project that is both visionary and self-reflexive, full of horrifying deeps but also soulful ones, and its installment In the House Upon the Dirt Between the Lake and the Woods does not disappoint—though it does haunt, as a chronicle of a world coming apart.