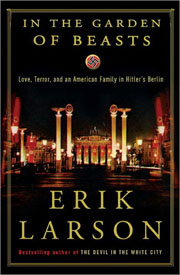 It is easy to wonder how Hitler gained so much power so quickly, and with so little resistance. While the details of his ascent are described in countless biographies and the warning signs are recounted in every book of World War II history, In the Garden of Beasts takes a fresh approach. The latest book by Erik Larson, author of The Devil in the White City, is a personal and relatable story, filled with the excitement of revolution, the sounds and smells of 1930s Berlin, and the practical details of an American family’s adjustment to German life.

Larson tells the story of William Dodd, a college professor and historian, and the U.S. ambassador to Germany during Hitler’s rise to power. Dodd had no diplomatic experience and considered his life’s work the writing of a four-volume history of the old south. An unusual character, thrifty and modest in the face of German excess, he was not the first choice for the position and met resistance from the “old boys club” atmosphere of U.S. diplomats. He travelled to Germany with his wife and his adult children in hopes of reuniting the family, who approached the trip like an extended vacation. The book’s focus is narrow and its story brief, centered personally on the ambassador and his family. Through the eyes of these relatively ordinary Americans, the reader gains an inside perspective into life in Berlin and into Hitler’s government.

Foremost among the fascinating elements of the book is the gradual dawning of horror that the American family in Berlin experiences. The reader’s historical retrospect adds to the sense of a growing threat, and Larson’s complex intertwining of plotlines maximizes the effect. Larson draws the reader in to his suspenseful narrative by provoking our curiosity at the end of a chapter, then beginning a new chapter on a divergent plotline. While this can be frustrating, it is more often tantalizing, and maintains a sense of continuity through rapidly interwoven subjects. The book’s masterful construction disintegrates with a disappointingly abrupt last section, but ultimately fits Larson’s aims—to follow the story of the Dodd family rather than be dragged off into another history of World War II.

At the heart of the story is Martha, Ambassador Dodd’s twenty-four-year-old daughter. To Martha, a trip to Berlin at the beginning of a revolution is an exciting adventure, and the young Nazi officers intent on reviving their country are the objects of romantic fascination. An attractive, liberal young woman, she becomes a Berlin society girl and has affairs with several political and social figureheads. Her story provides the romance and much of the entertainment, and is filled with surprising, enlightening, and very human stories about the head of the Gestapo, the foreign press chief, and even an attempted match between Martha and Hitler. She befriends the liberal elite as well as prominent Nazis, and has no regard for the danger of speaking against the regime. Her story turns from a society girl romp abroad to an epic love story when she meets a Soviet spy, and eventually toys with the idea of spying herself. Martha’s sections are fascinating, infinitely readable, and best at showing the alternating excitement and fear that makes the family’s story so unusual.

In some ways the book reads like an apology for Dodd, an historical pardoning of a man who ultimately met with professional disgrace. While Dodd shows fortitude in a speech about the dangers of controlling governments, he is easily swayed by Nazi propaganda. His belief in the basic goodness of men and in his own ability to council Hitler back to reason postpone the U.S.’s acknowledgment of a German threat, but Larson focuses on the snobbery of Dodd’s detractors, allowing Dodd to remain a sympathetic character.

As in Larson’s other books, the author demonstrates a remarkable ability to engage the history buff and the novice alike. His writing is detailed, engaging, and easy to read, even when densely packed with information. An odd mix of sensationalism and education, the book is filled with details about public officials, the landscape of Berlin, and the personal troubles and triumphs of the Dodd family, but it never loses its energy in minutia. Larson’s engaging writing makes this work of nonfiction read like a novel, one that is very difficult to put down.