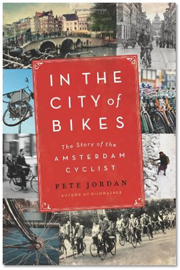 Open this book, hop on a bike, and explore the streets of Amsterdam. It can be any bike, perhaps one with wobbling wheels, a creaking frame, or porous tire tubes patched to oblivion. In Amsterdam, the bicycle capital of the world, cyclists dominate the streets, and everyone cycles—businessmen clad in suits, couples holding hands, pregnant women, children, the elderly, and even the queen. In the City of Bikes springs from American author Pete Jordan’s semester spent studying urban planning in Amsterdam, which turns into a lifetime as the city’s bicycle culture draws him in. Soon after his arrival, his newlywed wife Amy Joy joins him in Amsterdam, where they eventually come to own their own bicycle store and raise their son.

Fascinated with Dutch cycling culture, Jordan combs through newspapers, magazines, diaries, and any archive available with references to bicycles. In this book, Holland’s bicycling history comes alive with quotations from policemen, activists, journalists, and government officials. Beginning with the bike’s initial popularity in the 1890s, Jordan dramatizes the evolution of Amsterdam’s bike theft problem, the futile efforts of the police to quell bicycle traffic and parking chaos, the impact of the Nazi occupation on the cycling culture, the anarchist movement to implement a communal bike system, and the competition between bicycles and automobiles.

Through these accounts, Dutch cyclists emerge as a collective body that defies eradication and resists regulations, from red lights to parking prohibitions. When the Nazis attempt to confiscate Amsterdam residents’ bicycles, they were quick to warn each other and hide these most cherished possessions in their houses and buried in their backyards. When new tires were unavailable during the occupation, people fashioned tires out of garden hoses or rode on wheels without tires. Whenever police imposed regulations on cyclists, crowds gathered:

Interwoven with these histories are moments from Jordan’s life in Amsterdam as he transforms from an unwitting tourist walking in the bike path, which he thinks is a sidewalk, to a seasoned cyclist whisking his son around the city. Like the streets, even the canals of Amsterdam are filled with discarded bicycles, and the city employs bike-fishers to excavate them, a sight that bike-fanatic Jordan is eager to share with his son: “Some papas long for that day when they take their son to his first ballgame. Me? I was excited that my boy would get to witness his first bike-fishing expedition.” Each page of this delightful book exudes Jordan’s passion for bicycles, as evidenced by his often-cited reason for staying in Amsterdam: “Whenever anyone asked why I had immigrated to Holland, I didn’t hesitate to reply: ‘So I can be stuck in a bicycle traffic jam at midnight.’”