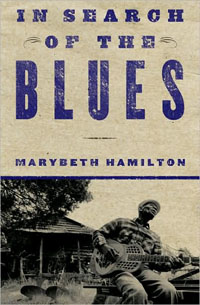 Since the colonial era, white Americans have shown interest in the music produced by African-Americans. For example, in Notes on the State of Virginia Thomas Jefferson praised his slaves’ talent for playing the “banjar.” During Reconstruction, Northerners and Southerners alike struggled to describe this music, which sounded foreign to their Western-trained ears. African-Americans themselves promoted their unique musical style to white audiences, most famously the Fisk Jubilee Singers, who introduced Negro spirituals to listeners internationally. By the 20th-century, however, appreciation of this music had faded as African-Americans became more interested in ragtime, jazz, and other popular musical forms.

In Search of the Blues provides a solid overview of the efforts of several individuals who dedicated their lives to recovering the lost folk music of African-Americans. Some, like John and Alan Lomax, are widely celebrated. Others like Howard Odum, Dorothy Scarborough and James McKune are less well known. But according to author Marybeth Hamilton, all were instrumental in recording and transcribing traditional African-American music and shaping present-day conceptions about the style known as the blues.

These collectors’ stories are practically epic in scope. They ventured into African-American communities, inside notorious prisons, and down obscure back roads, capturing on primitive recording equipment what remained of this music in the memories of sharecroppers, prisoners, and itinerant musicians. In addition to encountering a basic distrust of whites and a disinterest in old tunes, they learned that live performances were rapidly being supplanted by DJ’s spinning “race records” in African-American bars and juke joints across the South. Indeed, the records were often the same ones heard on Chicago’s South Side and in Harlem.

Most important to Hamilton is the process by which a founding myth of the blues was advanced. She writes, “the Delta blues was not born in the bars and dance halls of Mississippi. . . It was discovered— or, if you like, invented—by white men and women, as the culmination of a long-standing fascination with uncorrupted black singers, untainted by the city, by commerce, by the sights and sounds of modernity.” This myth has dominated music history and criticism into the present and is prevalent in the writings of noted authors Robert Palmer and Greil Marcus. Its greatest proponent was Alan Lomax, who commemorated his Delta sojourns in The Land Where the Blues Began. An ever-narrower definition of “authenticity” resulted, which defined genuine blues as sung for personal reasons by aimless drifters who had no intentions of performing, recording, or publishing their music.

All of which begs the question: what did African-Americans think about these white people invading their towns, asking questions about obsolete music, and pushing microphones in their faces? An answer is suggested in Lost Delta Found, edited by Bruce Nemerov and Robert Gordon (Vanderbilt University Press, 2005). The source materials for Lost Delta Found were recently unearthed after disappearing for decades inside the Library of Congress. The book consists of sociological studies, jointly authored by Fisk University scholars and the Library, that documented the everyday lives of African-Americans in Coahoma County, Mississippi, circa 1941-42; John Work, a music professor at Fisk, researched the same musical genres as Hamilton’s subjects. Hamilton alludes to this important corrective to the blues founding myth in her endnotes, but she ignores its implications within the body of her book.

The portrait of Alan Lomax that emerges in Lost Delta Found is decidedly unflattering. Ostensibly a co-sponsor of the Coahoma Study as an archivist at the Library, he co-opted (less generous observers might say “plagiarized” or “stole”) Work’s contributions to the project, even confiscating field recordings Work had made and depositing them in the Library in defiance of an agreement to share credit for the Study’s findings. That Hamilton gives short shrift to this unsavory story relays the false impression that only whites showed interest in African-American folk music. In addition, her book’s citation methods could stand to be more robust; although phrase notes and an excellent index appear at the end, a more formal list of works cited and numbered endnotes would be useful.

In spite of these flaws, Hamilton has produced an important work of music history that sheds light on obscure appreciators of an even more obscure art form. American culture is all the richer because of what these individuals turned up—material that, as the author amply demonstrates, could easily have been lost to history forever.