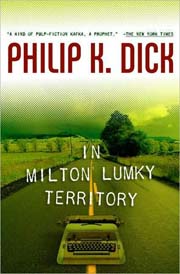 Before Philip K. Dick (1928-1982) became a successful science fiction writer, he wrote realistic fiction, penning titles such as Humpty Dumpty in Oakland and Voices from the Street. Now, as these books appear in the wake of his literary and cinematic rebirth, one can see what he was originally trying to do. In Dick's realistic novels, characters long for the American Dream. One can find the influence of Henry Miller (The Air Conditioned Nightmare) and Arthur Miller ("Death of a Salesman") in these early works, as they feature circumscribed salesman who do not fit in at work and are struggling to make a better life.

In Milton Lumky Territory, written in 1958 and first published (posthumously) in 1985, is a case in point. Aspiring businessman Bruce Stevens seeks to work in the territory of the older salesman Milton Lumky; being a friend of Bruce’s new wife Susan, Milton tries to help Bruce along in a scheme to buy Japanese typewriters that they can sell for a higher price in America. Milton fronts the money for Bruce to make the initial investments, but things go downhill from there, leading the characters to grapple with a semi-existential crisis.

Dick here writes plainly about life in California, the vagaries of love, and the struggle, sometimes spiritual, to survive. He depicts Milton as a fault-ridden character who, although helpful, often wisecracks and has strange opinions. Milton has problems with Bruce for not believing in god and finds it strange that Bruce’s desire “to make a store run is a permanent value.” When his younger rival realizes that he wants to leave “Milton Lumky Territory,” we know it’s not merely the sales area he’s talking about.

Like many of Dick’s main characters in his realistic novels, Bruce and Susan decide they need to move to start again—but missing from most of these novels is what happens to the characters after they have moved. Similarly, the tone of In Milton Lumky Territory is not very adroit; as in his science fiction novels, the story can feel sparse and padded with unneeded adjectives. There is little of the wild conjecture that one finds in Dick’s more popular books; rather than oppressive and violent governments of the future, there are toxic personalities to avoid. The only memorable reference to science fiction in Dick’s currently available realistic fiction is a character in Humpty Dumpty in Oakland who comments that the genre should be “easy” to write.

It was in fact easier for Dick, who in the 1960s became a favorite speculative writer for many readers, eventually developing a cult following. Yet though not as fun as his fantastic works, In Milton Lumky Territory and Dick’s other realistic books cut straight to the heart of the American Dream. These are real people Dick is writing about, the kind of morally complicated people you might find in any nearby store, and they each have their own dramas.