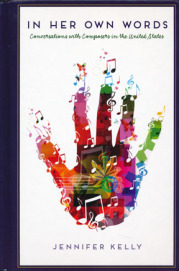 In the introduction to In Her Own Words: Conversations with Composers in the United States, author Jennifer Kelly describes the obstacles to programming classical music by women:

As a conductor, I have found that published compositions by women can be difficult to come by, and, when located, they must be purchased because the scores do not exist in most rehearsal libraries. Although I was advocating for the importance of women composers, I found that I was not programming their music in my own concerts.

. . . without the benefit of having studied women composers as a matter of course throughout my education, I mistakenly believed that the number of talented women in music was small . . .

This lack of academic recognition (and resulting monetary support) causes the obscurity and dearth of female composers to become a self-perpetuating phenomenon. The goal of In Her Own Words, which features interviews with twenty-five female composers, is to counteract this trend by “filling voids where little to no information previously existed.” The book makes a strong case for a socially conscious music scholarship while also affirming that there is no such thing as a “typical” woman composer.

The interviews are organized to “illustrate both connection and contrast”—their arrangement simultaneously highlights the diversity of the group while encouraging the reader to draw connections across genres. Jazz conductor Maria Schneider’s interview is placed next to that of academic Augusta Read Thomas; film composer Deborah Lurie is juxtaposed with Jeanine Tesori, who writes for musical theater. The interviewees also vary widely in terms of age (from early forties through late eighties), recognition (from Pulitzer Prize-winning Jennifer Higdon to the emerging Hasu Patel), and nationality (from Svjetlana Bukvich, a refugee from the former Yugoslavia, to Libby Larson, who has spent most of her career in Minneapolis). Each interviewee also has a distinctive working style: methods discussed encompass traditional manuscript notation and technology such as ProTools. Similarly, creative strategies range from allowing the music to develop “organically” to working on several pieces at once under tight deadlines.

Perhaps most relevantly for the overarching theme of the book, there are also many dissenting opinions concerning the relevance of gender in music. All of the interviewees were posed a variation on the question of what it means to be called a woman composer, and responses range from “I think it’s kind of stupid” (Pauline Oliveros) to the affirmation that it is a “heroic struggle . . . With the wind flowing in your hair and the tattered flag in the background” (Beth Anderson). A few of the composers claim that they have never felt marginalized because of gender. Others are very vocal about the enduring persistence of sexism in the music world, and attest to the continuing relevance of women-centric projects and visible female role models.

While attitudes are diverse, there are also many concepts that run through the interviews and make the book feel cohesive. For example, across genres and age groups, many of the interviewees express enthusiasm for technology. Several are avant-garde artists that incorporate electronic elements to create progressive, challenging work involving multimedia. Film and video game composer Laura Karpman describes the computer as “an unbelievable tool. . . . I loved it from the day we met.” Another notable theme is that of new avenues for art music. In a climate in which many traditional orchestras struggle to attract patrons, concerts featuring nontraditional material such as avant-garde or video game music are popular with younger audiences and often sell out. The motif of the expanding utility of classical music is especially striking considering the stereotype of the genre as an archaic art form that changes at a glacial pace.

In Her Own Words’ most compelling idea is that women composers aren’t merely entering an established community and adapting themselves to it; rather, they are shaping it according to their own experiences and needs. In many cases, their embrace of new genres, technology, and compositional techniques seems downright revolutionary. Celebrated Welsh composer Hilary Tann is optimistic about digital dissemination’s potential to topple the form’s “pyramid structure,” saying that “the whole concert apparatus has been short-circuited” and contemporary classical music thrives “in certain people’s iPods” due to sharing technology. With lessening emphasis on traditional genre divisions and the hierarchical academy, listeners are allowed to experience art music through new venues and on their own terms. Scholars, fans, and concert programmers take note—although women composers may be marginalized, they just might be the answer to classical music’s prayers.