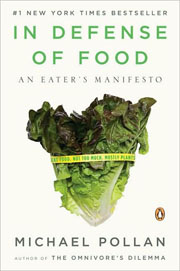 Michael Pollan’s most recent book, In Defense of Food: An Eater’s Manifesto is largely a polemic directed against what Pollan calls “nutritionism.” Pollan convincingly argues that much of what we eat is not indeed food at all; rather it is imitation food-like substances that have been altered by the processed food industries. These substances are then enriched with vitamins and sold as somehow healthier than “real” food. Pollan argues in accessible language that this paradigm shift in what he calls the Western diet is damaging to our health, and that we need to reassess our relationship with food as a whole.

Pollan charts shifting and often contradictory trends in nutritional science, which is often funded by the processed food industry as a means of bringing new products to market. Indeed, the shifts in what was considered nutritious— specifically the substitution in our diet of more traditional meats and fats with complex carbohydrates in the form of processed corn and soy products, Pollan argues— has been one of the fundamental causes of worsening of chronic diseases in the United States over the past 50 years. Statistically, Pollan points to the huge number of new products that are brought to market every year, the majority of which are merely recalibrations of the same basic processed ingredients. By altering these products such that they can make health claims, we have entered an era in which specious or highly suspect evidence is being used to market “health foods” that are not actually good for us.

Indeed, the trans-fats that once were pushed upon American consumers as a healthier alternative to more traditional fats have been shown to have severe negative health consequences. Omega-3 fats have now been identified as the new healthy fat, and the industry has been working to include them within normally unhealthy products. Indeed, we have stopped listening to the traditional arbiter of what is healthy for us to eat (“mom” to Pollan), and have begun to rely upon science, much of which has been manipulated by the processed food industry to misrepresent the health benefits of their products. Pollan argues that this process has been exploitative of both consumers and farmers, who have altered their eating, in the case of the former, and production, in the case of the latter, in response to these heavily marketed pseudo-scientific claims.

This process of food engineering, Pollan notes, poses other problems as well. While it makes logical sense to introduce vitamins and nutrients to unhealthy foods to make them healthier, our bodies are not evolutionarily suited to dealing with these floods of nutrients in this way. Smells and tastes act as triggers for our body to manufacture enzymes and the like that allow us to break down incoming proteins, carbohydrates, sugars, etc. In artificially altering and flavoring processed foods, our bodies may respond falsely to the nutrients we are taking in and deal with them improperly or simply store them. We are biologically ill-equipped to keep up with the changes within the industrialized food industry.

Corn and soy dominate processed foods (and as a result, U.S. agriculture) because they are among the “most efficient natural transformers of sunlight and chemical fertilizer into carbohydrate energy (in the case of corn) and fat and protein (in the case of soy)—if you want to extract the maximum amount of macronutrients from the American farm belt, corn and soy are the crops to plant.” This has dramatically increased the number of cheap calories that farms can generate, and is responsive to public outrage at escalating food prices throughout the 1970s. However, the nutritional value of the calories we are getting through these crops is significantly less than through a more traditional mixed diet of vegetables, meats, dairy products, etc. The United States now boasts some of the cheapest food on earth, and as Pollan notes both in the book and in a recent New York Times editorial, we now spend only 9-10% of our income on food, down from 17-18% percent 50 years ago; as a corollary, we now spend around 16% of our income on healthcare, where we previously spent only 5%. Even when the rising costs of health insurance are taken into account, there still appears to be a cost to cheap calories. Comparatively also are Western European countries such as France, which spend closer to 18% of their income on food and are overall much healthier, despite a perceived high-fat, high alcohol diet. A particularly chilling statistic Pollan draws attention to is that of soy consumption in America versus that in Asia (where soy is a traditional part of the diet): Americans are eating significantly more soy than most Asians, but instead of doing so in traditional healthy ways (i.e. tofu, etc), they are doing it through added ingredients in processed foods.

Pollan asserts that we need to change our eating habits dramatically, to return to a more traditional diet and away from the heavily processed foods that have been injected with nutrients. To this end, Pollan recommends a three-part rule of thumb: eat food, not too much, and mostly vegetables. The shift in what we eat has been, in Pollan’s words, “more seeds, less leaves,” and has resulted in calorie rich, nutrient poor diets. How we eat has also caused problems. Pollan notes that cheaply available processed and microwaveable foods have dramatically altered our relationship with what we eat, such that we no longer have a clear idea of food preparation and food production as a whole. We also take dramatically less time to enjoy our meals. While many European societies will take an hour or longer to sit down and fully enjoy a meal, Americans have a tendency to eat alone, at the office, or while watching television. We are also increasingly eating in our cars, leading Pollan to recommend that we stop thinking of food as simply fuel for our bodies, and focus on the wider sensory process of eating, rather than “getting your food from the same place your car does.” Overeating is in itself a problem. Many Americans have a hard time determining when they full and rely on external factors, such as the end of a television program or a plate being empty, to determine when to stop eating.

Pollan’s recommendations for how to alter our relationship towards food are largely common sense. The growing obesity epidemic in the United States provides more than sufficient evidence that Americans largely eat too many calories, even if they are “nutritious.” Pollan’s conclusions on “nutritionism,” while more controversial, have the ring of truth to them, and he does much to demonstrate the long history of conflicting recommendations by various nutritional studies as well as examples of the food industry’s tendency to exploit these findings. The failure of the Food and Drug administration to regulate processed food is in many ways shocking, however, Pollan makes it clear that the FDA’s hands are tied by the lobbying efforts of the processed food industry. What is surprising is the lack of public outrage directed at the FDA, as the status quo has prevented the FDA from effectively doing its job in protecting American consumers and encouraging better nutrition. While Pollan advocates for locally produced agriculture (and somewhat for organic agriculture), he is careful not to say that we should do away with the industrial food system altogether; rather he makes the case that we need be more mindful of what we eat, and to limit the amount of processed food we eat, specifically food that includes soy and corn derivatives.

Likely because it was one of the topics of his previous book, The Omnivore’s Dilemma: A Natural History of Four Meals, Pollan doesn’t fully address the environmental impacts of the industrial food system; some discussion of the environmental benefit of eating locally, for example, would have strengthened Pollan’s overall argument. Also lacking is a sufficient analysis of the social equity component of Pollan’s recommended diet. While he briefly pays lip service to the problem of nutritious natural foods not being cheaply available to economically disadvantaged communities, he fails to indicate realistic mechanisms by which these communities can access better, healthier, unprocessed foods. This problem is among the most difficult to solve, for it is the working (and non-working) poor who are likely to remain attached to the industrial food system that Pollan criticizes, as they are the primary beneficiaries of reduced prices. They are also the most likely to be afflicted by the various diseases, from diabetes to heart problems, that Pollan associates with the cheap food calories supplied by agribusiness. While community gardens and urban agriculture programs exist within many municipalities, not enough of them are actively geared towards providing affordable fruits and vegetables to disadvantaged communities. Indeed, many farmer’s markets are more expensive than their grocery store equivalents, and are geared towards middle class consumers who can afford, and even like to make a point of, spending a little bit more on food. Pollan’s conclusion in both In Defense of Food and The Omnivore’s Dilemma that we need to pay more for healthier food makes sense, but it can create a problem for those that already struggle to afford to feed themselves under the current food system paradigm.

One solution to this may be in reconsidering how agricultural subsidies are distributed in this country. While the primary benefits of these subsidies are afforded almost exclusively to large-scale corporate producers, the general perception is that these subsidies are going to protect the American family farm. They should be geared more towards protecting small and medium-scale producers to insure that they can remain competitive with big farms. Many of the small hobby farms are able to find niche markets and be profitable, however it is the medium-sized farms, who must compete with large-scale agribusiness, that are most in need of improved remuneration. A shift in subsidy policy could go far to remedy this; Pollan himself discusses the tendency of large-scale producers to abuse medium-scale producers in The Omnivore’s Dilemma. Additionally, the ability of the processed food industry to devalue the cost of raw goods, often at the expense of farmers, such as the lowering of milk prices (a process also tied to federal agricultural regulation and subsidy), needs to be addressed.

Another potential solution could be to provide economic incentives to agricultural producers to sell their goods locally. Introducing quotas for state institutions such as prisons and public schools that certain percentages of meals must be derived from locally grown agriculture is but one potential prescriptive policy mechanism to strengthen local small and medium agricultural producers. This would give these producers a way to compete with large-scale agribusiness, and could serve as a mechanism to promote more healthy eating choices within communities, especially the disadvantaged who are most often the recipients of school lunch programs and the like. In targeting school lunch programs, school children could also be given an education in healthier eating practices at an early age, which could go far in informing their eating choices later in life. Social equity within the food system remains a crucial consideration, and is important that the nutritional benefits of Pollan’s prescribed methodology for eating be accessible to all of the population.

With In Defense of Food, Pollan has produced a nuanced, funny, and intelligent sequel to his excellentThe Omnivore’s Dilemma, which was in itself monumental in sparking the current debate over food and food systems— but also one that serves as an excellent critique of the current industrial food system and as a good prescriptive device for deciding what to eat. Even if one can quibble with some of his conclusions and bemoan his oversights, Pollan’s work remains important in stressing that much of the relationship we have with food currently is detrimental to our health and destructive to our communities. In rethinking that relationship on many levels, we can make better food choices.