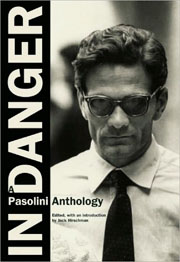 Like many people, I first encountered Pier Paolo Pasolini through his film The Decameron. It was a memorable meeting. To a wide audience, Pasolini is known as a controversial filmmaker, but he was a “creative dynamo,” justifiably famous in Italy as a poet, novelist, playwright, and essayist. His communist viewpoint is what a reader notices first—he was a thoughtful provocateur, an ideologue, and a moralist—but he did not always hew to the party line. His unorthodoxy kept getting him into trouble, as did his frank homosexuality. At the age of 53, in 1975, he was murdered.

Edited by Jack Hirschman, whose eclectic résumé as a poet and activist makes him an apt choice, this new Pasolini anthology balances poems and prose, the latter limited to literary reviews, essays, and interviews. Ten translators are represented, including the editor himself (and, a bit inexplicably, the erudite singer/songwriter Jonathan Richman). While this variety doesn’t hurt the prose so much, it does affect the poetry; the poems’ various forms and relatively consistent themes are obvious, but with several translators Pasolini’s language and tone are more difficult to gauge.

The primary approach of the poems is autobiographical, even confessional—Pasolini writes with touching vulnerability of his youth, his mother, and his sex life, as well as the more universal themes of loneliness, aging, anger, disappointment, and fear. At the same time, concerns with poverty, revolution, and the class struggle are pervasive. “The Coran Testament” ends with a declaration: “Long live the courage and the sorrow / and the innocence of the poor!” A decade later he writes: “Almost forty years old / I find myself in a rage. . . / I’ll never have peace, ever” (“The Rage”). A long poem, “Monologue on the Jews” closes as follows:

when the angels of resignation
—the poor at heart, the meek, the vulnerable,
the wretches, the Jews, the Blacks,

the young, the inmates, the virgins,
the peasants, the people lost
in the innocence of the barbarity,

all those who live dedicated
in humiliating otherness—
will commit violence.

Then life will begin!

Although Pasolini’s “otherness” as a homosexual is just one of several reasons for his deep identification with and sympathy for those on the margins, a few poems aren’t political, or nostalgic, or despairing. In “One of Many Epilogues,” he writes to a lover: “I’m insatiable about our life / because something unique in the world can never be exhausted.” “The Presence” is an appreciation of the soprano Maria Callas.

Pasolini expands many of the same ideas in prose, where his voice seems more mature. (The earliest poem here is from 1941; the prose selections, for some reason, start in the 1960s.) The geographical reach of the prose also is greater. At first, Pasolini enthuses over the younger generation, long hair, the New Left, and the SNCC (in “Civil War”). But he becomes disenchanted as he sees the potential for real change vanish; in the course of “The Hippies’ Speech,” the youth movement is co-opted, absorbed into the bourgeois mainstream.

He clearly admired Ezra Pound, and in two pieces makes an effort to let that founder of modernism, despite his embrace of Mussolini and his anti-Semitic rants, off the hook. Yet elsewhere he is highly sensitive to the reverberations and reappearances of fascism that continued long after its official death in Italy in 1943.

Prose also gives Pasolini room to stretch his intellectual muscles. Semiotics and philosophical speculation are regularly intertwined with political thought. As a literary critic with a distinctive voice, he reviews Marianne Moore, Mary McCarthy, Italo Calvino, Constantine Cavafis, and Osip Mandelstam, along with writers—Campana, Fortini, Buttita—not so well known outside of Italy. Occasional asides, like “Neruda is a bad poet,” seem intended to provoke. He pronounces Charles Olson “a disappointment,” a mere epigone of Pound. His declaration that Apollinaire, Machado, and Cavafis are the three greatest poets of the 20th century is more fodder for argument. A review of Dacia Maraini’s My Women becomes a general discussion of feminism, chauvinism, and what’s happening to women and to men, for both can be victims. “Real problems always begin after rights are given,” he reminds us.

“The less [sic] rights one has, the greater the freedom. The real slavery of the Black Americans started the day they got their Civil Rights. Tolerance is the worst repression.” Paradoxical and prophetic, Pasolini here sounds a little like Noam Chomsky, and his socio-political concerns (including racism, immigration, poverty) have only become more pressing. He felt the burden of his knowledge and awareness, as his final interview makes clear. Speaking truth to power always involves sacrifice. Faced with strong criticism from all sides, he acknowledges his “solitary struggle.” Yet his idealism was unchanged. “My nostalgia is for those poor and real people who struggled to defeat the landlord without becoming that landlord.”

Without a doubt, Pasolini deserves more attention. Hearing his cogent and self-aware voice (“I’m raving here, I realize”) in this book—which one only wishes were longer and more comprehensive—one can’t help but wonder what he would have made of Silvio Berlusconi, the European Union, the uprising in Egypt, and any number of other things. He wanted to keep us alert. “We’re all in danger,” he said, a few hours before he met his death. And we still are.