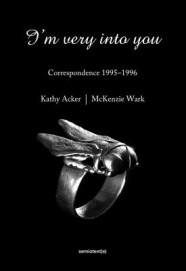 Writing defies death in that “to work in this world and to matter,” as Kathy Acker put it, is to leave behind words that outlast the body, the corpse. This is not, of course, to say that writing somehow transcends the play of power, that it can’t be seized and manipulated, as an object, for various ends (whether capitalism, colonialism, patriarchy, or of a leftist critique that, in the act of remixing, cranks up undercurrents, stripping bare the otherwise subtle ideology). But to speak of—and with—Kathy Acker is to speak of a more ideal mode of reading, a more ideal mode of community. Acker, drawing on the work of the paired thinkers she here refers to as “my favorite old shoes,” Maurice Blanchot and Georges Bataille, held that such community, a community of “friendship,” must be predicated on recognition of and maintenance of difference—“Real difference. Not fucking games. That’s what makes friendship,” she writes in these pages.

There are some fucking games between McKenzie Wark and Kathy Acker, though maybe some authentic encounters too—and certainly, in this collection of emails, some potential for Acker’s words to live again, to transcend the grave. There is what one might call a plot: girl meets boy, boy jerks her around, girl is brilliant, boy less so. Boy waxes in favor of the image of girl; girl bitingly and mournfully deconstructs the image and the dependence of culture producers on such images—on celebrity, on product, the name on the marquee, the portrait on the paperback cover—for their physical survival.

But one does not read Kathy Acker for the plot; rather, one reads her for the community woven together in her references, for the visceral and prophetic rage she (un)articulates, for the demonstration of and invitation to engage in artistic process, for thoughts on and words that gesture toward the bodily and the sexual, and for theory and exemplification of that ideal of community to which she was such a devout believer and selfless experimenter.

So here is Acker talking about Shaivite Hinduism and its theories of sexuality more explicitly than she does when she uses such material in Pussy: King of the Pirates, and here, too, is Acker musing on Nietzsche’s “permanent revolution” (“that lovely myth”), but also on The X-Files and her fondness for professional wrestling as a manifestation of a charming American “stupidity” as well as, simply, “The best performance art.”

And here is Acker on the wider realities of American society: “It’s homelessness and AIDS and a society that’s in the process of killing off the middle classes.” She speaks of driving through small towns and talking to people, of the backgrounds of her students, of the ubiquity of abuse and oppression, of what she calls the “big black hole” of the sacred at the center of America (fuelling a thirst for fundamentalism, for instance). “I just can’t bear seeing the world I live in,” she writes. “I have to hide in overwork. I can’t bear seeing what I’ve become. My friends. I guess when there’s no hope, what you do is come and fight. So that’s what’s happening, who we are. We’re fighting the only ways we know how, through culture and no one wants culture, and it’s war.” We have an intimate voice here not unlike the voices in her novels—“I come up for air and who am I . . . lonely and scared”—but we also have the voice of the writer, speaking outside of the curtain, putting plain words on the historical material conditions that define her life and will lead to her death: “We’re rats walking tightropes we never thought existed. No medical insurance; no steady job; etc.”

On process, the view of the artist rather than the art is intimate and sometimes surprising. The emails collected here are predominantly from early in the morning or late at night. “I’m such a schedule slob,” she says. She speaks of the energy and momentum of production: “You just write and write, work, I know work, and then shape it down, rework it, and extract the hot stuff. If you do enough, there’s hot stuff.” And she reflects on her collaboration with the Mekons for the album that accompanied Pussy: King of the Pirates: “I’m never having a book that isn’t sung again.”

The talk on sex is charged, because in these exchanges—most from August of 1995, with one short follow-up from February of 1996—Acker is trying to figure out what Wark wants of/from her, and she doesn’t appreciate his power plays or his seeming lack of recognition regarding the basic politics of sexual/romantic relations. In her communications with him she is clear and direct in terms of her desires both relational and physical. “To me, top/bottom is just stuff that happens in bed,” she writes. “Who fistfucks whom. Outside the bed, I do my work and you do yours. I fucking hate power games outside the bed and have no interest in playing them.” She goes on to say that “I love being someone’s object. I love being wanted. My body wanted. And wrongly. ‘Come here, slave.’ It’s one of the sexiest things I know. Totally not equal to ‘You’re a victim.’” Sexual politics is politics, sexual relations one arena for broader modes of relation, either oppressive or utopian. Thus, when Acker speaks of sex, she’s always also speaking of something else—community through transcendence of the self? Acker here describes sex as “that fabulous not knowing” as well as “this danger whose name is sex.”

In these pages we have something like a summary or walking-through of an as-yet unpublished lecture of Acker’s, on Bataille and Blanchot and community and Wuthering Heights, available in fragmentary notes and a fragmentary audiotape in the Acker archive at Duke University. It is an important document, a formulation of Acker’s central philosophy, and the pages here are likewise important—from the insistence on approaching Bataille as a thinker concerned, foremost, with community, to Acker’s joining in Bataille and Blanchot’s struggle to imagine community in the wake of fascism and communism, “this possibility which, one way or another, is always caught in its own impossibility,” a community predicated on “recognition of radical difference.” Here is Acker, writing to Wark but surely also just writing:

So Bataille, and through Bataille, Blanchot turns to the self-other (relation?!) as the possible ground for community. Remember, we are talking about the ground of radical difference. Let’s see if I can find one of the essential (essential!?) passages: “A being does not want to be recognized, it (notice the “it”) wants to be contested: in order to exist, it goes toward the other, which contests and at times negates it.” (91)

This notion of difference as contestation, as always difficult; this recognition of encounter as risk, a risk of self and of (fabulous) not knowing—these key aspects of Acker’s thought and practice are tall orders, while the flip-side (othering as reduction, as fetishization; that safe egotism of treating others as objects to be used and manipulated outside of the bedroom zone of play but in the world always) is easy, even reflexive. Acker is famous for appropriation, a tactic she engages as part of her quest to instantiate and illustrate a community of radical difference. But recent days have illustrated the flip-side to this utopian approach of “no fucking games”—the games played by Kenneth Goldsmith with the body of Michael Brown when he claimed that body as a work of art, say—and have led to widespread recognition of the ease of collaborating in deep patterns of oppression while also sparking discussion about the baffling way in which people (poets, conceptual artists, thinkers!) can remain blind to their own privilege and exercise of power, even while explicitly entering into specific histories.

Acker’s words need to be heard in these contexts, and these critiques of appropriation and the power play of seizing the other offer some tension for considering the project of this posthumous anthology of emails. Matias Viegener’s introduction begins by describing how an unnamed novelist declined to write an introduction to the volume, saying, “it felt too much like rooting around in someone’s underwear drawer.” This is the second such volume of posthumous correspondence from Acker to be published, though the first, Spread Wide (Dis Voir, 2005) was explicitly framed as an ongoing collaboration, Paul Buck and Rebecca Stephens and John Cussans writing around and in honor of Acker, even as their texts were arranged around an array of notes from and photos of the bookshelves of Acker. That volume eschewed the move of pushing forth from the emails into more voices, using Acker’s text in order to create more communication and thus new community; rather, the contents in I’m Very Into You are framed with forensic stamps of date and time sent, subject line, to and from addresses, and further framed with tenuous academic conceits of an introduction and an afterword. There are no notes, and only some names have been changed, plus some mistakes have slipped past the editors (Stephen Phofl’s Death at the Parasite Café is here “Paradise Café,” for example.)

The “Afterword,” by John Kinsella is a letter to Wark and, like Wark’s contributions throughout, is simply mismatched with Acker’s texts, heightening that sense of something sordid at play in this little book, these emails from a dead woman presented in a publishing “collaboration” as one-sided as the flirtation they partly detail. That such imbalance would characterize a volume that delves into and attempts to make clear the ubiquity and consequences of imbalance of power is perhaps ironic and certainly poignant, heightening the reader’s sense of loss. Sure, it feels at times like rooting around in someone’s mail, which it is, but the mail of an artistic and intellectual figure taken too young from a society that needs her, that needs her thoughts and her desires, her perceptions and her hopes. What we have, instead, is her writing. I’m Very Into You, problematic as aspects of it might be, contributes to that oeuvre in a useful way.