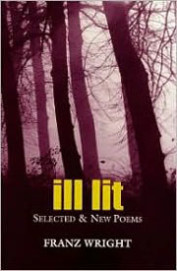 If the book's a door to some dive, dank but inviting, then the title must be a sign, a neon scar above the open maw, maybe missing a couple of letters. Ill Lit, the title of Franz Wright's new and selected poems, is just such a sign, its crippled shorthand a harbinger of dark happenings within. It's difficult to say—Ill Lit. It demands an awkward pause (a stutter, a limp), like something's a little wrong. Certainly something's wrong with the central presence in many of these poems. Take "Voice," originally published in Rorschach Test. In its page-and-a-half life span, the poem alludes to insomnia, physical handicap, paranoia, and the desire to burn everything one has written "in that big metal can in the alley, / you know, your publisher." On top of all this-or, rather, from within all this-one hears a voice. One that teases and beseeches, then mocks. Who is finally talking to whom, and hearing whom, is the unspoken inquiry through which the last lines echo: "You don't / care now-how can you. No, I don't care what they say, / what they do to me now. I used to. Terribly. And then you didn't. // And then I didn't." The poem ends with the "I" devouring his enemy only to find he's swallowed his own tail. This can be taken two ways: as psychic dissociation ("hearing voices" is also known as schizophrenia) or as a visionary flash, obliterating the boundaries between the inner and outer worlds, self and other, art and life. Wright's work oscillates between these poles. On one hand, in a poem like "The Lemon Grove," he can celebrate "the world's wordless beauty / intact." More often, however, he remains outside the garden wall, peering in. On the source of such exclusions, D. H. Lawrence says this: ". . . my individualism is really an illusion. I am part of a great whole, and I can never escape. But I can deny my connections, break them, become a fragment. Then I am wretched."

No contemporary American poet has explored the wretchedness of broken connections more unrelentingly, and with more startling results, than Franz Wright. The title poem of Entry in an Unknown Hand depicts a landscape of paranoiac isolation worthy of Wright's namesake, Franz Kafka: "And still nothing happens. I am not arrested. / By some inexplicable oversight // nobody jeers when I walk down the street." By poem's end, the speaker has confided his ceaseless fear, yet still persists "dodging cars that jump the curb to crush my hip" and veers "toward my place, // the one at the end of the counter, // the scalpel on the napkin." It is noteworthy that the poem ends with a surgeon's implement, for it is with surgical precision that the speaker has removed himself from others, from any sense of connectedness to the world. Or perhaps he has been "cut out," ostracized. Whatever the source of this predicament, the speaker remains acutely aware of his isolation: it is reflected in the glinting scalpel-haunting, ominous, like a terrible thought one cannot shake. But surgeons, of course, save lives, and one gets the sense that isolation serves the speaker in some capacity. There is almost an element of relish in the way he says, "It has been so long / since anyone has called; / I can't remember the last time / I heard the doorbell ring." From deep within this isolation, another kind or surgery is taking place. It would be easy to call it poetry, but that's like summing up surgery with a scar. Poems arise out of this process, and give it a name, but only occasionally does one of these documents bear witness to the fact that it is words by which we know Lawrence's "great whole," and words which sever us from it. To use Denis Johnson's metaphor, language is the glittering "veil" through which we view the world, as well as that which forever impedes our apprehension.

Eaten up by this bitter irony, it's no surprise that Wright's work is relentlessly metapoetic (see "Initial," from The One Whose Eyes Open When You Close Your Eyes, or "Words," from The Night World and the Word Night, just to name two examples). This gives his work a thrilling compression which counteracts the fact that he is, in many ways, a traditional lyric poet. In "Night Writing," we begin with "[t]he sound of someone crying in the next apartment." The poem suggests that the speaker has overheard another's sorrow, stimulating this meditation. But by its end, much as in "Voice," a merging has taken place: the "sound of someone crying" which closes the poem could be that which, continuing uninterrupted, gave it its beginning; or it could be the speaker, moved to tears by fellow feeling, the poem's perspective shifted; or it might have been the speaker all along, imagining what it might be like to hear himself-or to be heard-crying from the next room. What it might be like to be someone else. To not be this.

Just as words both separate us from and secure us to the world, so must Wright write through the self to obliterate and transcend it. To see these poems as merely confessional is to ignore their artistry, their formal links to traditions as diverse as the haiku and German Expressionism (Georg Trakl is an ubiquitously terrifying angel here). To read the themes of self-destruction in his work as mere dysfunction, or mere catharsis, is to deny Wright his ultimate ambition: writing his way back from isolation, back from illness, back from the self to the absence that preceded us, and the silence that must follow.

“What to do," the poet wonders, "if the words disappear as you write / what to do // if they remain, / and you disappear." Here's hoping this book insures that his words don't disappear (as the individual volumes that comprise it have) for a very long time, allowing more and more readers to discover the work of this painstaking, brave, and important artist. Wright is, in Denis Johnson's estimation, "the only true poet" in America today; Ill Lit is a fierce testament to the harrowing demands of such a vocation, as well as what Wright himself has described as its "mysterious / privilege and joy."