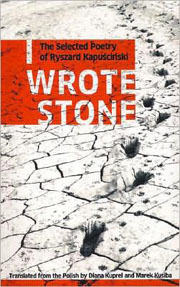 Here in the U.S. we are a guilty nation, and as such, we like our Eastern European poets with a hearty helping of angst. More exactly, we fetishize the suffering of those who weathered Nazi and Soviet occupations. The more horrible the poet’s biography, the more easily we acquit ourselves as complicit citizens of a hegemonic state. Paul Celán: brilliant. The wry Wisława Szymborska: even better. The new works of Tadeusz Różewicz: too Brechtian, perhaps, to win the Nobel, but perfect for self-flagellation. The Poles have been over there suffering for generations, their history and literature a petri-dish culture for the vicarious suffering of the Polish-American middle class.

Unfortunately, I Wrote Stone: The Selected Poetry of Ryszard Kapuściński may not prove the best target for our fetish, because Kapuściński was not a victim. In the introduction, translators Kiana Kuprel and Marek Kusiba note, “he was the hero of his own books”—a useful strategy when one is reporting first-person on rebellions, revolutions, and coups. It is a less useful strategy when one is engaged in the writing of poems. Poetry is many things, but it is by and large not for grandstanding, and the best poetry evokes or depicts an undaunted, humanistic vulnerability.

The significance, then, of these poems in translation—poems of an internationally-known journalist who was fired by hard-line Stalinists for reporting on labor conditions, is rumored to have investigated his colleagues for the Communist Polish secret service, and stands accused, posthumously, of fabricating facts, witnesses, and entire witness statements in his reportage, his only defenses being “poetic license” and an obscure Polish genre of political allegory—is without question. Regardless of whether Americans find the poems sufficiently “Polish,” they are important on scholastic grounds, as an addition to his translated œuvre.

With contemporaries like Czeslaw Miłosz and Wisława Szymborska, Kapuściński has big shoes to fill. He seems to have used verse as a space to play, to try on various forms; the 56 poems gathered here are remarkable for their lack of unifying pathos. There is Różewicz’s whimsical tone in some passages:

Yesterday a weary Christ came to me
in a dream and said,
“It’s gotten so hard to get
a glass of clean water.”

And Różewicz’s short, inelastic line in others:

I wrote stone
I wrote house
I wrote town

But Kapuściński’s instinct is nothing like Różewicz’s. Rather than attempting to reassemble truth after years of torture and war, his poetry is more lyric, and turns inward: “I shattered the stone.” Kapuściński is thematically closer to Czeslaw Miłosz, whose poems also establish Romantic allusions and lyric naiveté—

To exist in purgatory,
circulating between those who’ve passed away
and the keepers of their memory

—but he lacks Miłosz’s guilt at having gotten away from Soviet Poland, and Miłosz’s confused indignation at the world at large.

Kapuściński should be read, in fact, as an artist who managed to “make it” in Soviet Poland, a highly public figure who took calculated risks and survived. His talent (and his heroism) is in his navigation of that world as much as anything else. And if the poems fail to close down upon us with the satisfying weight of Eastern European history, if they fail to assuage our burgeoning guilt, that is perhaps because Kapuściński was taking his great risks, and making his grand gestures, elsewhere. Or because his relationship with his nation, with its politics, was as nuanced as yours and mine.