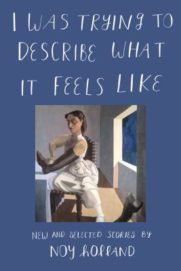 Describing what it feels like to read Noy Holland’s new and selected stories, I Was Trying to Describe What It Feels Like, is nearly impossible. The language tilts and loops. The tangible diffuses, dissolves, reconstitutes itself into something other. Any message a reader might seek evades. But we can be thankful for that, because in this difficulty there drums the pleasure of reader and writer in conversation—in mutual recognition of their shared endeavor.

Writers and readers, creatures whose favored habitat is the printed page, are indeed ever trying to match word to feeling. We are taught—as young and not-so-young writers—to use our five senses as our tools for observation and description. But in Holland’s stories, we are granted no definite, nameable sense from even these basic impulses; physical feeling refuses to be pinned down by expression any more than feeling felt by mind or heart. “It was as if you were watching music”; “A place that was like a painting of a place”; “Might it be not the sea we hear, but some lurching yellow dream we wake to keep from dreaming?”.

Holland not only crosses our sensory wires, she also blurs the boundaries between individual people, delicately blending one character with another or with multiple others. In this way, she questions the absoluteness of our (humans’) separate identities. It is frightening, and it is lovely—frightening because there might be nothing we cling to more than our uniqueness, our ability to single ourselves out; lovely because this compulsion to join, even fuse, with someone else can be a sort of caring or love—and, as in “Orbit,” the novella that portals us into the collection, a means to heal: “I lay with her and in the nights thereafter and after a time to lie there, curved into the wound in her, I think to grow in under her, bone by bone, my toothy spine her long wound’s tongue and groove to seal her.”

Holland takes this notion in various directions, among them displacement, replacement, and interchangeability—as when the narrator tells her addressee in the collection’s title story, “Every boy I ever loved peeled his face off and gave it to you. They’re all you.” We also witness the literal, but heightened, attachments of motherhood; the mother of “What Begins with Bird” insists, for example, “I would have carried him in me for years,” and after her son is born, she notes as she breastfeeds him: “He is rooting, and then uprooting me -- that’s what it feels like.” And we see how the urge to shoulder another person’s burdens, as illustrated in "Chupete," can intensify into a darker appropriation of another’s tragedy, as per the narrator’s confession in “Tally”: “It had not been my grief but I had claimed it.”

In “Matrimonial,” a sleepless couple melds by way of their projected shadows: “I stood behind you. Together we made a shadow of one body, four arms, thrown against the cliff from the moon.” A more elaborate melding is accomplished later between a pair of Sioux girls in “Milk River,” though this time it is through voice, as well as their shared experience and rituals, that the girls become sweetly and hauntingly singular: “It was a trick: you couldn’t tell between them . . . They might be one voice, or four.” They can even “dream the same dream,” they swear. They have become wardens of the land and mothers to their fathers, supplanting their mothers who also “had been girls together,” who “died days away from one another.”

This profound synthesis becomes one pulsing artery in the book’s complex vascular system. I focus on this one of so many—inheritance; quiet violence; interruption and disruption; the relentless temptation of the hypothetical; disaster and the occasionally, oddly beautiful ruins thereof—because I find it particularly reflective of the nature of fiction. Isn’t this why a child begs his parent for a tale at bedtime? Why a commuter buries her foggy, early-morning head in a novel? Why writers choose their maddening craft over a steady nine-to-five? It is a sort of affirmation, then, to behold Holland’s characters as they themselves enact this most sought-after feat of fiction, the traveling together—writer, reader, characters—from sight to sound to smell to touch to dream, from mind to mind to mind to mind, all in the name of that exquisitely impossible undertaking: to know what it feels like.