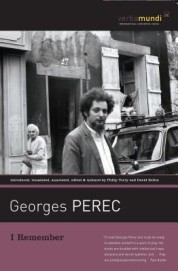 To some readers, the title of this newly translated book by Georges Perec will bring to mind another with the same title, and in a prefatory note Perec acknowledges that earlier work while distinguishing it from his enterprise: “The title, the form, and, to a certain extent, the spirit of these texts are inspired by I Remember by Joe Brainard.”

Published in 1979, Perec’s short work became, as David Bellos explains in the introduction, a surprisingly popular selection from its author’s inventive and amusing oeuvre. Contemporaries of Perec appreciated it—it “quickly became one of France’s most-loved short works”— for its combination of communal nostalgia and playfulness, and I Remember continues to be embraced by “later generations,” even having been reimagined by others as both a stage performance and a movie. Explanations offer themselves—collective memory, the juxtaposition of oddities, and additionally, for Perec readers, windows opened on his other works—but the greatest pleasure people take from I Remember, something like that offered in Raymond Queneau’s Exercises in Style, resides in what it steers clear of offering: there is no plot to involve the emotions, there is no main character you’re badgered to care for, and as for a Great Theme, that is as absent as the letter e in La Disparition, Perec’s novel that refrains from using that vital letter. Meaning resides in the diverse recollections that are far-flung, at times mysterious (helpful notes in the back provide information for contemporary English readers), and set in a particular time period, but this meaning ceaselessly shifts and is, in the end, as visible as a soap bubble but as impossible to seize. The work manages the difficult feat of eluding complete sense while capturing the imagination with its free movement from one subject to another.

As with most works by Perec, there is an Oulipian restraint: “you had to remember something that other people could remember too; and the thing remembered had to have ceased to exist.” At Perec’s request his publishers (originally, and with this edition too) left blank pages at the end so that readers could fill them with their own memories. This openness to extending the text encouraged many variations that, as Bellos relates, took on lives of their own. “The most touching imitation of the formulaic design of I Remember is Harry Mathews’s homage, The Orchard” (Perec dedicated the book to Mathews, who had introduced him to Brainard’s book).

The 479 entries—the 480th is unfinished deliberately—do fit in categories: much is recalled of performances by film actors, musicians, and singers, while cycling, racing and boxing heroes are given in verbal thumbnails: “I remember that the racing driver Sommer was nicknamed ‘the wild boar of the Ardennes’” runs one entry, and in a more familiar vein, “I remember Davy Crockett fur hats.” Jokes can be labored—“I remember: ‘Say it, eh Shaun, pronounced the whale, I’ve a dull fin, but don’t lack purpose’”—or treacherous, like other parts of the work. Philip Terry, the translator, remarks that “Perec’s French is full of hidden puns and references and is never easy to translate—and if it looks easy, I should be especially wary.”

Advertisements, jingles and shows on radio and television were set down over the period of composition (1973-1977) and are often drawn from earlier days. The random recollections appear on the page as distinct units:

I remember the period when the fashion was for black shirts.

I remember I started a collection of matchboxes and one of cigarette packets.

(In this respect, I Remember brings to mind two other French books: Félix Fénéon’s Novels in Three Lines, in which events are compressed into brief and laconic newspaper accounts, and Édouard Levé’s Autoportrait, a work filled with seemingly unconnected assertions.) What Perec retrieved from the past was, at the same time, general in that others had to stand a chance of sharing the memory, and particular, for though his statements might be mistaken in a detail, still, that remains true to what he recalled. Occasionally he allowed for doubt: “I remember Atlas the Giant (and the dwarf Pierhal?).

Part of the pleasure of reading I Remember is the unexpected encounter with other authors: “I remember that I belonged to a Book Club and that the first book I purchased was Planus by Cendrars” will delight readers of that Swiss-born idiosyncratic writer. When Perec recalls “an anecdote that traced the invention of mayonnaise back to the siege of Port-Mahon (under Napoleon III),” it summons up my reading, years ago, that in I’ll Say She Is!, the first successful Marx Brothers stage show, Groucho, dressed as Napoleon, on hearing “La Marseillaise” declares, “The Mayonnaise! The Army must be dressing!”

The last few years have been good for Georges Perec fans: I Remember comes on the heels of English editions of An Attempt at Exhausting a Place in Paris (Wakefield Press, 2010), The Art of Asking Your Boss for a Raise (Verso, 2011), and La Boutique Obscure: 124 Dreams (Melville House, 2013), and ahead of the newly published Portrait of a Man, his first novel and one not previously published in English. Though the method behind I Remember seems easy to duplicate—today I write I remember Selectric typewriters, and I remember eating a Bar Six, usually at recess—trying to come up with the right 500 entries might be a strain. This work is a treasure chest of associations and an enjoyable light read.