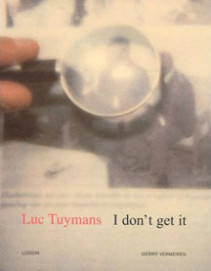 While Luc Tuymans has been one of the most celebrated European painters of the past twenty years, it is easy to understand why many might wonder why—I don’t get it is certainly aptly titled. Accompanying Tuymans’s 2007 exhibition of the same name at MuHKA, Antwerp, the catalog presents an extensive collection of work, including paintings, but also source photographs, prints, film stills, magazine editions, buttons, and other projects from the 1980s through 2006. The book also includes three critical essays and several of Tuymans’s own short writings about specific projects.

Much has been written about Luc Tuymans’s work and practice; the artist is generally known to be outspoken and intellectual. His body of work is large and the paintings themselves reference photographs, film, memories, historical events, and other paintings. In her essay “I Still Don’t Get It,” Montserrat Albores Gleason describes how the work must be seen and interpreted within its context, as you would see it in an exhibition, so that the paintings resonate against each other. That said, if you are approaching Tuymans without much prior knowledge, it’s hard to know where to begin.

At first glance, many of the works might have nothing to do with each other. Subjects range from a portrait of an African dictator (Lumumba, 2000) to a monumental still life (Still Life, 2002), to empty slide projections (Slide #1, 2002). Tuymans’s famously muted palette is a through-line, as is his famously rapid process and resulting style—he completes each painting in a single session. There is a remarkable consistency and intensity to the way in which they are handled, and an equally remarkable sense of detachment from what is being painted.

The question, then, that the essays implicitly try to answer is: what is he painting? They take different approaches and do not reach a definitive conclusion, but they do bring you to some intriguing places along the way. Gerrit Vermeiren’s piece, “Noise,” provides a good introduction to the work. His obvious familiarity with both the artist and the work comes through clearly and lets him speculate about why Tuyman’s oeuvre is powerful without giving us too many answers; his frank, conversational writing style is compelling and memorable.

Vermeiren begins by giving us a picture of Tuymans as almost an anti-action painter: he is focused on creating the image described by the painting, while staying emotionally detached from the subject of that image. Beginning painting instructors often tell their students not to paint from photographs; they flatten the world, give it a single focus, reduce the work to a copy rather than an investigation. These are the kinds of qualities that clearly fascinate Tuymans. He is interested in the image—as reproduction, as a medium of omitted information, as part of pop culture, as the object through which we look at the world.

His discussion touches on the Polaroid, which Tuymans uses extensively in his work and some of which are reproduced, borders and all, in the catalog. According to Vermeiren, Polaroids are important to the artist because of their physicality as well as their instantaneity. Many of the examples shown in the book have the slightly blurry, muted, badly exposed quality of a Polaroid taken on the spur of a moment but then left in a drawer and rediscovered after its context and meaning have evaporated. That same quality pervades the paintings, as well—some feel as though the image was important, once, or should be; some feel incomplete, like there is more waiting beyond the frame; some feel like a clear memory of something completely unimportant, like a thermostat, which might nevertheless be associated with something sinister. These pictures are actually haunting, tugging at the edges of memory with a random banality that rings true more than any contrived creepiness. “Tuymans’s paintings are in harmony with the aesthetics of memory.”

Vermeiren delivers no conclusions, but opens up possibilities of understanding the work through memory, silence, film, time, and nothingness. By contrast, Dieter Roelstraete gives us a single all-pervading theme: smoking. In his essay, “Scenes of Waiting. A Portrait of the Artist as a Persistent Smoker,” Roelstraete discusses Tuymans’s chain-smoking habit and how it relates to his painting, how painting and smoking in general are connected, and why Tuymans installed a peculiar glass smoking room inside the exhibition (bizarrely, there is no photograph of this in the catalog, though there is on MuHKA’s website).

Roelstraete mainly connects smoking and painting through their relationship to time. In an era when making a photograph can take fractions of a second, time has become extremely important to painting, which is a comparatively slow process. A painting represents accumulated time—even when completed in a few hours, as Tuymans’s are. Cigarettes are also a means of passing time, killing time, or measuring time, the way early clocks were simply candles slowly burning down. Both smoking and painting involve a great deal of waiting; “Luc Tuymans’s smoking room is also a waiting room—but one that begs the following tantalizing question: a waiting room for what?”

Roelstraete takes us through various associations—mortality, boredom, modernity, film, addiction—all of which offer various perspectives on the artist’s work. Is painting simply a means of passing time, one that is also addictive and compelling? Is each painting a way to make it to the next painting? Is the process of painting—which, in Tuymans’s case, is performed with a cigarette in one hand—so completely divorced from the exhibition that smokers are hermetically sealed at a distance from the work? Or is the work supposed to be seen through a fog, making the smoking room the ideal viewing location? The essay poses numerous questions, and investigates them with a depth of thought that is as satisfying as it is playful.

Ironically, the book finishes with Montserrat Albores Gleason’s essay, “I Still Don’t Get It,” after which you won’t, even if you felt like you did. While she does have some interesting ideas, her overly academic prose makes them hard to digest. She spends a good portion of the essay describing how Tuymans brings about the impossible through the possible; “what Tuymans orchestrates is not the representation of the impossible, but the impossible as possible.” As an example she takes his painting Gas Chamber (1986), which looks simply like a room until you read the title, at which point it takes on a horrifying magnitude.

Albores Gleason also puts forth the idea, fitting as a bookend to the catalog, that it is perhaps best to approach Tuymans’s work from a place of non-understanding. There are many who probably pay less attention to the paintings—or to their experience of them—because they ‘get it’ and move on. But being uncomfortably outside of it, faced only with an image and not with its context, may in fact be a better way to approach Tuymans’s work. Letting the images float in front of you, detached from their critical baggage, can open a new space for possibility and memory.