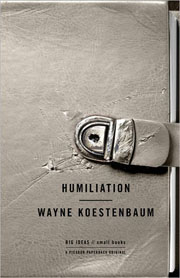 To expose one’s self to an audience does not come easily, but for those concerned with the honest portrayal of emotion—namely writers, poets, or any kind of artist—the ability to lay bare even the ugliest parts of human interiority is a necessary and vital skill. Yet, the very notion of exposing one’s self carries with it the challenge of reconciling sentiments of shame, dissatisfaction, and even disgust with our own identities.

In his latest work, Wayne Koestenbaum maps this vast terrain, providing an unequivocally valuable social, historical, and philosophical meditation on the pleasures and conundrums of disgrace. Humiliation—technically a long form essay—critically examines instances of degradation throughout history, popular culture, and current events in order to postulate universal theorems about the nature of humanity. As grandiose as such a task might sound, Koestenbaum views his material from abstract and often charming angles, making the book a unique read that will leave readers writhing with pleasure, revulsion, shock, and empathy.

Stylistically, Humiliation matures from Koestenbaum’s best-known critical works, Jackie Under My Skin: Interpreting an Icon (1995) and The Queen’s Throat: Opera, Homosexuality, and the Mystery of Desire (1993)—both of which remain in print. This is perhaps because this new book is written with a simultaneous audience in mind, the layman and the academic. With an almost magical ease, the book does not sacrifice its intellectual merit by using simple language. Koestenbaum writes with the precision of a journalist and the sincerity of a diarist. The language is clean and unpretentious, rarely registering as anything other than thoughtful and genuine.

The first chapter of Humiliation clearly lays out a theoretical map. Koestenbaum defines his titular subject as “the intrusion of an unwanted substance or action upon an undefended body.” As such, humiliation requires three essential components: a victim, an abuser, and a witness. From this simple formula he draws several conclusions, the most compelling of which is that humiliation entails a specifically “physical process.” The essentially physical nature of humiliation, he argues, might explain why it is often a sexual fascination. Using Julia Kristeva’s notion of the “abject” and the writings of the Marquis de Sade, Koestenbaum argues that the “lowering of status and position” requires an almost pornographic display of the body’s “fluids, solids, organs, cavities, orifices, outpourings, ingestions, excrescences, spillages.”

Though the book begins by examining humiliation through a theoretical lens, it does not stay there. Koestenbaum displays his rigorous wit and charm by using tidbits from popular culture and current events to bolster his claims. New York magazine once called Koestenbaum the “philosopher of fabulousness,” and one can see why when he devotes a large portion of the book to persons whose celebrity is or was largely a matter of having their bodily functions exposed, such as Michael Jackson, Liza Minnelli, Larry Craig, and Eliot Spitzer.

By that same token, Koestenbaum does not simply use popular culture to support his claims. He also cites an incredibly large number of historical figures, theorists, and artists to elucidate his points. Among them are Charlotte Brontë, Simone Weil, Anne Sexton, Antonin Artaud, Sylvia Plath, and The Bible, to name a few. Even if one does not agree with Koestenbaum’s ideas,Humiliation provides an expansive list of books, movies, and articles that are certainly worth further investigation.

The essay does not dwell entirely on the dreariness of humiliation either. Underlying Koestenbaum’s entire study is a belief in the paradoxically “tranquilizing” ability of humiliation to cause the “cessation of humiliation.” It seems that Koestenbaum subscribes to the idea that “identity germinates from humiliation’s soil,” a theory most notably attributed to Freud’sCivilization and Its Discontents. Ultimately the book leaves the reader with an invitation to consider the ethical uses of the knowledge one gains from the experience of being humiliated. “We have an obligation to keep asking questions about experiences that are not our own,” he writes, “experiences that are worse than our own ever will be.”

Extensive as the study may be, Koestenbaum never follows up on some of his more peculiar and fascinating observations about humiliation, such as his claim that the number three “appears to be the magic number where humiliation . . . is concerned.” Furthermore, he claims that humiliation “resembles a fold,” that “the self-abased soul undergoes an inner contortion,” yet he never supports this claim, leaving the reader to question its purpose. Considering the book’s brevity—one can most likely read it in an afternoon—the reader trusts Koestenbaum to be economical with language and ideas. And, mostly, he delivers. When he does not, however, he is often forthcoming about his lack of answers. “I don’t know why I’m convinced that humiliation resembles a fold,” he writes, “but I can’t erase this conviction.”

Though some of Koestenbaum’s tangents leave loose ends to be tied, there are points at which his refusal to draw conclusions for the readers works in his favor. Koestenbaum is also a poet and novelist, and indeed some of Humiliation’s most compelling passages are the most poetic, abstract, and reflective. The book ends with a section devoted to his own humiliations, a biographical compendium of things he would rather the public not know. The section reads with shocking sincerity, and Koestenbaum’s confessions of masturbating to nude photos of his students or his reaction upon receiving a bad book review ironically elevate his ethos. In the end, Koestenbaum rises above the role of an academic or theorist—or perhaps I should say he lowers his status into the realm of the dreamers, the humanly creatures, where he is most welcome.