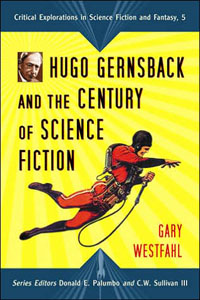 Gary Westfahl, a Pilgrim Award-winning science fiction scholar, here commemorates Hugo Gernsback, the writer and magazine editor recognized by many as the founder of science fiction. Westfahl does honor some of Gernsback’s literary forebears, especially Jules Verne and H.G. Wells, but he credits Gernsback with setting the modern science fiction phenomena in motion, claiming it was “Gernsback’s ability to forcefully communicate his ideas, and to elicit a strong response to those ideas, that most clearly separates him from all his predecessors.”

Gernsback (1884-1967), who self-published his stories and articles in magazines such as Science and Invention and Amazing Stories, began serializing his novel Ralph 124C 41+: A Romance of the Year 2660 (currently in print from Bison Books in their Frontiers of Imagination series) in 1911. Westfahl regards the book, which he admits that “No one could say… is a good novel,” as the “foundation of science fiction,“ but pointlessly derides the author numerous times (e.g., “Needless to say, Gernsback is no Faulkner”). He usefully suggests, however, that Gernsback’s very role as publisher, editor, and science fiction proselytizer may have been what held his writing back: “If he had been a struggling writer striving to sell science fiction stories to pulp magazines, he surely would have learned to pay more attention to developing his characters and keeping them involved in exciting situations and less attention to scientific discussions.”

Hugo Gernsback and the Century of Science Fiction is at times dry, academic in tone, and repetitive because it collects essays and articles Westfahl wrote for scholarly publications. Westfahl does write with confidence and precision, but the work lacks drama; particularly painful is the analysis of the many variant editions of Ralph 124C 41+. Still, here recounted is one of the central storylines of the history of science fiction. One can easily gather why a major science fiction award, “The Hugo,” was named after Gernsback, who succeeded in getting his message to the masses.