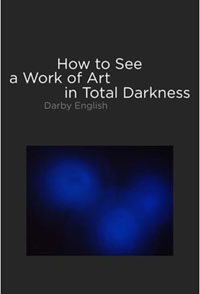 Free to be you and free to be me—whether you look at children’s books or listen to presidential proclamations of the United States’ national values, American mythology teems with the idea of freedom; on an individual level, that includes the freedom to be who we are and, more importantly, what we want to be. Yet does this seductive myth of freely invented identities withstand closer scrutiny?

In How to See a Work of Art in Total Darkness, Darby English, Associate Professor of Art History at the University of Chicago, investigates the limits of this almost proverbial freedom in the work of five African American artists at the turn of the 21st-century: each of these artists—Kara Walker, Glenn Ligon, Fred Wilson, Isaac Julien, and William Pope.L—must answer to what English calls “black representational space.” As members of a group perceived to be different from the norm, these artists are called upon to represent their group, as if it were some sort of homogenous monolith, whether they want to or not. But what exactly happens when the group on whose behalf you are expected to speak disagrees with what you have to say?

English probes the political, historical, and cultural conditions that have given rise to black representational space; invoking Fanon, Du Bois, Locke, and Booker T. Washington, he takes great pains to situate the genesis of black art in “the shadow of Jim Crow,” in early 20th-century narratives of racial uplift, and in explicit calls for black art and propaganda to function as one. “Black art,” writes English, “is never the obvious or inevitable result of a black artist’s creative labor. It is rather a regime whose sharp redress is sometimes required for meaningful aesthetic and intellectual advancement.”. Black art, then, does not simply result from the creative efforts of someone who happens to be African American; it is a regime of representation, closely related to demands to “act black” or questions of whether someone is indeed ”black enough” that enter into the artistic realm here. (One can draw timely comparisons to the discussion the current Democratic presidential nominee has inspired among African Americans of different generations.)

The politics of negotiating this representational regime become most urgent in two instances of English’s study: first, there is Betye Saar’s 1994 letter campaign against Kara Walker’s “negative images” of African Americans. Saar, whose work unequivocally conforms to the demands of black art, presented Walker’s imagery as a threat to the coherence and dignity of black representational space: in Saar’s opinion, Walker’s sexual, scatological, and frequently violent portrayals of African Americans do not abide by the narrative of racial uplift and the duties of representativeness. English refutes Saar’s claims by situating Walker’s work in the genre of landscape painting and interprets the new kinds of imaginative spaces her tableaux create.

The second controversy English analyzes in detail happened in a much less organized and more insular way: during William Pope.L’s Tompkins Square Crawl in 1991, the artist, in a suit and videotaped by a white man, crawled along the street holding a flower pot with a marigold, when an unnamed resident of the then-troubled neighborhood approached him to express his concern. This initial reaction quickly changed to anger and contempt, though, and the resident demanded to know, “what are you doing showing black people like this?” His outrage lies at the heart of what English terms black art’s regime of representation.

English portrays the nameless resident as someone caught up in the very categories and narratives of upward social mobility and black middle-class unity that Pope.L’s performance seeks to question. In English’s analysis, the resident, who “gropes ever more intently after forms of knowledge that will hold—of race, class allegiance, legitimate art, and the law,” comes to stand in for all those unilluminated, ordinary people who do not understand and are too impatient to wait to be told the meaning of Pope.L’s symbolic acts. The artist tries to defer the resident’s attention—“I’ll explain it to you later” and “when I get finished"—but the resident insists on an explanation right then. The account resonates with a discomfiting edge of condescension toward the resident’s values as a presumably middle-class individual, and one cannot help but wonder if a different portrayal of the stakes involved for each of the participants might have been possible.

The very language in which English presents his observations seems exclusionary: How to See A Work of Art in Total Darkness is not conducive—or intended—for casual reading. The book resulted from a doctoral dissertation and dutifully performs in the argot of academia, with its own narrative of uplift and professional advancement. While English points out that even Pope.L’s critique of the categories of difference we so habitually rely on to make meaning remains complicitly caught up in them—to decenter “does not mean giving up,” English observes—his own participation in yet another version of the narrative of uplift goes unexamined and unmentioned. Perhaps a former dissertation is no place to look for such reflexive self-referentiality, but the centrality of the narrative of uplift to English’s argument suggests otherwise.

How to See a Work in Total Darkness treads cautiously into the minefield of cultural difference and the politics of representation. The artists push the conceptual constraints of black representational space—but ultimately, they expand rather than abandon that space. According to English, they perform careful balancing acts: on the one hand, they resist the representativeness imposed on them and insist on pursuing creative expression and artistic liberty wherever it may take them, from Walker’s Southern Gothic tableaux to Ligon’s paintings of Richard Pryor’s crude jokes to Julien’s exoneration, of sorts, of blaxploitation movies. On the other hand, though, they still permit the “simultaneously obdurate and intimate character of the constraints against which they work.” English investigates these constraints on what is permissible, representable, and even thinkable. But if these artists indeed rebel against the dictate to produce black art, their resistance, in the final analysis, is less an explosion of the space they are caught in than a stretching, broadening, and twisting its boundaries.

Their work, then, functions as the necessary means of redress for the sake of advancement—but whose advancement are we talking about? It seems as if, despite their complex negotiations with the politics of difference, including active resistance and disobedience to the demands placed upon them, in the end English returns their work to the narrative of racial uplift, in the guise of intellectual and aesthetic advancement.

What happens to the ur-American idea (and ideal) of freedom here? Who is indeed and without reservations free to be you and me? English points out that we, whether as viewers of art or participants in the social realm, are accomplices in maintaining the meanings—and constraints—of difference. The policing of the boundaries of difference—English refers to the “boundedness” of race—is by no means limited to an anonymous, desperately invisible source of power, but, as English shows, resides within the contradictory constraints of black representational space itself.

English’s five artists all open up “the multiple meanings of blackness and the plurality of ways of living under the black sign” through their disorienting interventions. As African American artists, these five may have to struggle to shed the racial responsibilities placed upon them. They may not be free to be whoever and whatever they want to be—but they are expanding the possibilities of being and living under the black sign.