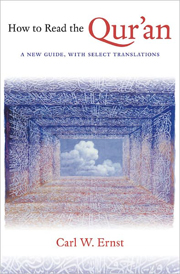 Approaching the Qur’an “like any other writing”—i.e., as a human work rooted in history, rather than as divine revelation, an eternal “aesthetic miracle” which can thus never be translated—Carl W. Ernst applies the sort of academic, non-confessional reading that has long been standard for academic study of the Jewish and Christian scriptures to the Qur’an. Muslim claims to the text’s divine status are one reason for this lack of literary historical reading of the Qur’an, but Ernst traces out a history of non-Muslim dismissal of the text, as well. There will surely be those, both Muslim and non-Muslim, who reject the notion that one can read the Qur’an “without being required to either accept or reject its authority as a divine message,” but these parties are also likely to reject the idea of the academic study of religion in general. Ernst, on the other hand, carefully argues that his “nontheological reading is not meant to be an antireligious rejection of the divine status of the Qur’an as accepted by Muslims. Rather, it brackets out the question of religious authority as something outside of the scope of the present inquiry.”

Put simply, Ernst encourages us to read the Qur’an closely for “its style and structure, its reference to earlier literary productions, and its historical contexts, including its initial audience.” Readers in this mode should eschew imposing contemporary categories or theological notions back onto the seventh-century text, resist reading the text in the light of later Islamic theology, practice, and history. This, then, is the “How To Read” of the title—Ernst’s book lays out theory, justification, and method, with ample examples, for an approach which, again, has long been taken for granted in the academic study of Jewish and Christian sacred texts. Just as those texts are, in the academy, “not studied today primarily through the authoritative interpretations found in Midrashic commentaries or the writings of the Church Fathers, but as literary texts that emerged in particular historical contexts,” so Ernst wants to articulate an approach to the Qur’an that frees the text from its layers of interpretation within the Islamic community. Such “nontheological” academic work has long provided Jewish and Christian religious communities with a source of both fascination and explicitly theological readings. Ernst is quite open to the fact that this book will be of interest and use not only to scholars and students and curious non-Muslims, but also to mosque reading groups and individual Muslims eager to experience a text they take to be God’s direct revelation in a fresh light.

While Ernst has no interest in what he terms “the trite category of ‘influence’—i.e., arguments, often in the past polemic and anti-Islamic, that Christian and Jewish or other traditions influenced the text of the Qur’an—he is invested in parsing out “the connections that the Qur’an has with other cultural traditions.” He insists that just as non-Muslims need to drop the facile notion of “influence,” Muslim scholars should not respond to such comparisons with “defensiveness.” The text of the Qur’an offers evidence for, among other things, “detailed acquaintance with the ritual performance of Christian worship service, in the form of the Magnificat and Benedictus biblical songs that are quoted and revised in suras 3 and 5.” Parsing out allusions to biblical texts, Ernst shows that “the Qur’an demonstrates detailed knowledge of the way that the Gospels reinterpret earlier biblical texts, but it takes an independent position in reevaluating the Old and New Testaments and its relation to both.” Christians constituted an important audience for the Qur’an, as did the wider citizenry of Mecca, whom the text indicates to be cosmopolitan and “relatively sophisticated” in their acquaintance with religious ideas. Comparison is also useful, Ernst suggests, in making sense out of aspects of the text that might otherwise read as contradictory. Considering parallel arrangements in the gospels and certain Near Eastern texts, Ernst explains how seemingly contradictory statements flag relationships between values and function rhetorically for readers or hearers.

Ernst’s attention to form—ring structure, parallelism, intertextuality—helps elucidate the rhetorical power of the Qur’an. He shows how the text repeats key terms, as with the notion of “burning” in sura 74, and accentuates emotion, as when images of heaven and hell are paired, with “the virtuous and the sinner reflecting aloud on the good or evil deeds that brought them to this final moment.” To introduce his readers to the fruits of recent scholarship “without the jargon and overly technical language” of such studies, Ernst walks readers through the relations of such findings to given samples of text. His annotated translations, marking examples of parallelism and emphasis and intertextual reference, make echoes and evocations visible, showcasing the value of an attentive literary analysis. Ernst likewise explains the visceral effects of Qur’anic poetics and Qur’anic recitation, and how those techniques relate to the message—as when, for instance, “the impression of a violent desert raid” emerges from both imagery and rhythm, “giving a gripping sense of impending doom to the promised judgment in the afterlife.”

Muslim, non-Muslim, religious, and irreligious readers will all find in the Qur’an, as Ernst presents it here, something of interest. This is a groundbreaking and essential book, surely to be of interest and use in mosque study groups and intellectually minded book clubs as well as classrooms. An appendix on “Suggested Interpretive Exercises” will serve all such audiences well. While resolutely “nontheological,” Ernst’s attentive and clear-eyed engagement with this profoundly important book is explicitly ethical; his project here echoes those Qur’anic “declarations that unmistakably propose a vision of religious pluralism as part of God’s plan,” offering a rewarding glimpse into the history and literary power of one of the world’s most important texts.