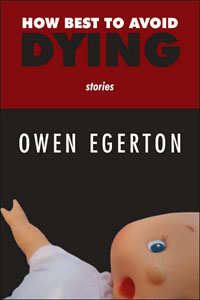 Do you remember writing short stories in third grade where, mid-story, just as you were running out of room on the page, you did the only logical thing? You suddenly ended the story by having the protagonist meet his or her maker by whatever twist popped into your head. Owen Egerton, in his new collection, How Best to Avoid Dying, captures that degree of originality and surprise. No, he doesn’t resort to flower pots falling from windowsills or death by backyard quicksand; mortality seeks out his characters in plausible yet shocking ways. After all, the world is a deceptively menacing place, as any reader of Egerton will gather. His little episodes are of the mundane surreal from which George Saunders has also harvested; add to that a lover with a gun and a plan, or a penis that bosses its host around, and you get a sense of Egerton’s tragicomedy of death.

In nearly every story here, a protagonist is on the verge of a sudden and inescapable end (although, cunningly, that end often doesn’t arrive before the story runs out). In a distinct few of these tales, it seems death is tied up with an urge to compete: First, there’s a spelling bee wherein the contestants who misspell fall into a pit with a splat, followed by sounds of screaming. Next, a radio station calls on a would-be listener in "Waffle," and the waitress who answers the phone falls for what sounds like a prank but wins; meanwhile the protagonist, a retired waffle house inspector about to drive off into the sunset of his life, turns out to be the fool. In "The Martyrs of Mountain Peak," a camp counselor dies trying to beat his own water-slide record, but in the hearts and minds of the remaining camp counselors he has lost his life for the lord, and now they all can’t die fast enough.

This is a serious book, no question, about matters of faith and love and mortality, yet it is also playful, sardonic, silly, chatty, and sometimes curt. And while this work is clearly reminiscent of the best of its kind, in a strange and intoxicating universe that includes writers from Vonnegut to Barry Yourgrau, Egerton’s take is all his own.

But back to spelling bees: in that first story, where the losers face what has all the markings of a gruesome death, we’re never told what becomes of the winners. In this way the story leaves us with a little tension. It seems the best way to avoid dying is no way at all, for we all have to compete, and we’re all going to misspell a word eventually.