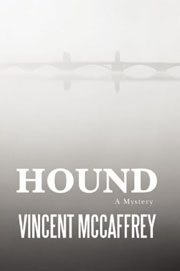 Although longtime Boston bookseller Vincent McCaffrey’s first novel is debuting in the fall, it’s much more of a winter book—and for more reason than that it’s set in and around the crisp Beacon Hill neighborhood from late fall through Christmas. A young Jimmy Stewart could play protagonist Henry Sullivan, also an online bookseller, as he shuffles through beers with best friend Albert and barkeep Tim, awkward encounters with his recently deceased landlady’s daughter, calls for appraisals of dust-gathering books, and lots of death. What begins as just a strange period of time when several acquaintances die soon solidifies into two book-related mysteries.

Albert, who runs a trash removal business, includes Henry in one of his more unique finds, a sealed-off attic apartment whose interior indicates it has been untouched for a hundred years. Henry falls in love with the room’s pristine collection of early twentieth-century bestsellers and with the letters inhabitant Helen Mawson had kept. His fantasies about Helen’s life easily accompany his cataloging of the find, and supposition becomes truth, adding sturdy texture to the rest of the novel and skillfully shedding light on some long-forgotten literary history.

Henry’s week is already busy, but even the two-day notice his new landlady has given him becomes a brief aside when he receives a call from a former lover. Meeting with Morgan Johnson again, Henry’s life progresses from appraising her personal library to investigating a murder and dealing with multiple branches of her family, friend, and professional trees. McCaffrey, however, never crosses into Murder, She Wrote- or Miss Marple-type categories, in that Henry doesn’t become an earnest amateur sleuth, nor does he add “detective” to his business cards in hopes of Hound becoming the first in a series.

One of the strengths of this book is McCaffrey’s droll description throughout. He writes about Henry’s phone:

It was a fifty-year-old black rotary which still had better sound than any new one he had tried . . . . One thing he did not like was that strangers could call him . . . and enter his small universe without permission . . . . But then, he had often admitted to himself that he liked the unexpected quality of lifting a receiver and not knowing what he was going to get . . . . Then again, he did not like to be suddenly presented with problems he could not take the proper time to consider.

And about one of Morgan’s well-known friends:

In warmer weather, he famously wore a navy blue blazer jacket with no shirt and shorts and sneakers with no socks . . . he disdained underwear. Though his body seemed to grow a sufficient mat of red-black hair to keep him warm in cool weather, he did alter his wardrobe in winter to a Harris tweed . . . but still avoided shirts. He was known to strip naked at parties and swim in whatever pool of water was near at hand. Though he was a professed vegetarian, he had established a reputation for biting photographers, reporters, and presumed girlfriends.

As quick as McCaffrey’s wit is, so is his un-saccharine sentimentality. In response to a client’s demand that he tell her about the most valuable thing he ever found in a book, Henry answers, “A poem.” His father, a gruff man of action and not of contemplation, once surprised Henry by reciting a poem “as if in answer to some hidden question” before turning back without explanation “to his chore in the kitchen.” A black-and-white photograph of “long-dead film stars captured in their candy-colored prime beneath glass made Henry think of the butterflies” at the natural history museum. And about books in general, Henry is a re-reader, and for that reason, “there had never been anything more than fitful curiosity at a library. There was no sense in getting involved with books there.”

In the end, that careful attention is what makes Hound evoke such a Jimmy Stewart–movie atmosphere. It wraps up completely like a, yes, package—but an honest one, skillfully wrapped and artfully offered.