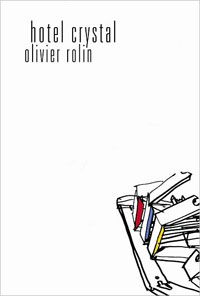 One enters Olivier Rolin’s Hotel Crystal through a narrow door with a brass knob, which rests loosely in its housing and will not turn until jiggled. Once inside, readers will find thick green shag underfoot that swallows the sound of their passing. The plot is the overstuffed, four post bed abutting the east wall. The characters are the myriad wallpapers, overlapping in places, repeating in others. The story is the small writing desk facing the window, served by a crooked chair. The voices are the layered smells that seep from inside the armoire—oak, varnish, mildew, starch.

Each chapter of Hotel Crystal begins with a meticulous description of the main character’s current hotel room, followed by a pertinent anecdote. The protagonist presents himself in these first-person anecdotes as—among other things—a prominent figure in international intrigue and espionage, and as a lecturer on Proust who’s greeted at brimming lecture halls by crowds of swooning, short-skirted schoolgirls. It’s readily apparent that he is inventing his autobiography. The only room our narrator can neither remember nor describe—unless he’s perpetrating a cover-up—is the epicentral room #211 at the Hotel Crystal.

All these flights of fancy are written on whatever materials the author has at hand: pages torn from books such as Under the Volcano, Alice in Wonderland, Leaves of Grass, and Georges Perec’s Species of Spaces, as well as postcards, travel guides, notebooks, etc. That he is composing his work on unsent postcards and stationary suggests he seeks correspondence, but has no one to whom he can write. Instead, he stores his writing in a briefcase, which he abandons in a taxicab immediately before his disappearance. The briefcase is found by a friend and turned over to a group of editors, who guess and second-guess at authorial intent and arrange content as they see fit.

Sorting out this mess of unreliability is part of the fun; Rolin’s biting satire of the thriller genre, academic world, and “high” culture is another. Most enjoyable, though, are the protagonist’s fictitious bits of autobiography. He writes both the hotel room depictions—Perec-esque in their menacing commitment to precision—and the fraudulent autobiographies because he is bored. The real reason behind his globetrotting is never revealed, but the unexceptional rooms he occupies suggest his life outside his writing is mundane. These hotel room vignettes seem like the character’s primary coping mechanism.

That these descriptions never lead to anything may frustrate some readers, but this is part of Rolin’s gambit. In the end, Hotel Crystal uncovers and questions our boredom and frustration—with this novel, literature, reality itself. We are left facing the void, our own personal room #211, which can (and must!) be filled only by our own imaginations.