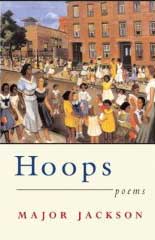 I read Major Jackson's new book Hoops in the week between the end of the AWP conference and the beginning of college basketball's annual furor, March Madness. And this mid-frenzy caesura seems like exactly the right place to appreciate Jackson's struggle in this latest book, pulled between one kind of carnival and another: on one side, the streets and the hoops in spoken-word rhythms that jump off the page in three- and four-stanza lay-ups, and on the other, the po-biz world, and its big dance of conferencing, residencies, and publishing.

The first section of Hoops begins with the long title poem, which eulogizes a street-ball phenom from his youth, “Radar,” in pitch-perfect stanzas:

Elbows posed like handlebars,
he flicks a wrist, the pill arcs
through sunlight glare,
& splashes the basket's

Subsequent poems, driven by sensation and story, investigate the muscular grace of the urban scene, from the rooftop, the dance floor, the café. Poems in the second section, “Urban Renewal,” rely on longer, subtly rhymed lines, and reach further into childhood memory. From his grandfather's rooftop garden comes an urban pastoral:

Pasture of wind-driven litter swirls among greasy
bags of takeouts. Panicles of nightblasts
cap the air, a corner lot of broken TVs empties
and spills from a suitcase of hurt.
(“XIII”)

Or, in church, the poet recalls his baptism scene:

…caught in that rush of tambourines next to solemn
trays of grape juice and bits of crackers held by deacons when
the reverend, serious as a pew, whispered, “Fall back, my son.
Fall.”
(“XIX”)

These poems truly show the range of Jackson's formal talents and his capacity for expanding the lyric potential of narrative.

The last section, “Letters to Brooks,” comprises over half the book. It is an ambitious project of tightly constructed poems, each titled with their place of origin, and consisting of seven-line numbered stanzas. In these broadly addressed letters to Gwendolyn Brooks, Jackson wrestles with the politics of the poetry world—his role, his ambition, his contribution—but digresses to riff on his immediate surroundings, the headlines, pop culture, his friends and family.

The initial poem “Fern Rock” identifies the project as an “epistolary chat” and proceeds to wander from Jackson's son's imagined scene of Brooks in heaven, to a riff on parenting and the vanity of parents “who schedule / A child's every waking hour,” to a comment on visiting a high school where he plans to warn the kid about the dangers of cannabis (rhymes with “benefits”), concluding the stanza with “Kids, deign to avoid. / You'll likely catch the paranoids.” Finally, establishing himself in an epistolary tradition, he namedrops Whitman, Mark Doty, Auden, Chaucer, Dante, and Joyce—with a digression on the NEA and e-mail. And so it generally goes for 13 more letters, each between 7 and 18 cantos, sent from places variously obscure (“Olney”), known (“North Philadelphia”), or simply “Wyoming.”

Jackson's project here is ambitious, if uneven. Certainly there is much to absorb on a second and third reading, and there is marked brilliance in the dazzling spins of language, easy in its shifts among idioms and registers, as in “Girard”:

Rene Descarte:
Omnia apud me poetica fiunt. Oops!
I misquote by design. Call in the troops.

and the juxtapositions of classical and pop culture, as in “Hunting Park”:

O, Orpheus grant the skills to stir
The dead like Kanye mixing music with fire.
Spitting souls through wires.

The strongest of these letters, “Cecil B. Moore,” considers a post 9/11 world as seen by a father fearing for his son, maintaining a tight narrative coherence and a more unified topical focus. Likewise “Spring Garden,” with the repeated trope “When you have forgotten,” catalogues image after brilliant image:

But weaker efforts are fraught with insider references to particular AWP conferences or the work of friends, and a reliance on rhyme (strictly ababbcc) that generates:

Like registering students for my classes,
Or answering e-mails from the lads and lasses.

Some of the smartest, most musical and accessible poetry is being written by contemporary African American poets, including Terence Hayes, A. Van Jordan, Crystal Williams, Natasha Trethewey, Frank X. Walker, Kevin Young, Elizabeth Alexander. It is informed, even wise, to questions of form and the potential for mixing different vernacular registers, juxtaposing popular and classical culture, and recovering landscapes, historical and contemporary, that stun in their unexpected beauty. Major Jackson extends this exciting new tradition with Hoops, offering a startling range and sensibility to the worlds we inhabit.