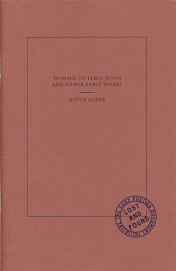 “Immediacy,” for Kathy Acker, was an aesthetic move and a political tactic. She used the term to describe both art that moves its audience and for the insurgent potential within such art—its use value as a tool for revolution. In two of the essays collected in her ever-intriguing Bodies of Work, Acker discusses the power of such “immediacy” and offers a justification for the writing of fiction. When done right, she argues, such artistic work is neither a placation from historical-material realities or the creation of a luxury good for the rich, but, rather, the construction, through words, of “that which will become actual,” the enactment of new ways of being, new communities.

Not all fiction, of course, is revolutionary. Much of what “will become actual” solidifies the power of the oppressive political, economic, and mental (“mythical,”Acker would also say) patterns that define our “unbearable” status quo. Yet Acker links her own revolutionary work, throughout her career, with a broad lineage of artists conscious about the efficacy of their work and united in their recognition of oppression and commitment to certain values (foremost of which is community predicated on respect for otherness). Acker thus places her work within what she terms “the tradition of political writing as opposed to propaganda.”

The difference here is, in part, ideological. Novels written by wealthy, misogynist, racist writers are necessarily propaganda. But there is a difference, too, in terms of method. What critics might categorize as “experimental” Acker celebrates as engagement in action with practical consequences. As she explains it, “verbal sensuousness,” “imagery, dangling clauses,” and direct engagement with dreams and desires are all more than mere aesthetic choices; they are political choices, as well. Artistic choices are thus deployed as an attack on capitalism and patriarchy, to use the two terms Acker most often employs as shorthand for the headless and entangled systems through which people are separated from and continue to separate themselves from others, constructing hierarchies of power and notions of autonomy and ownership, domination and dehumanization.

Further, Acker argues that rationality itself is part and parcel of the economic and political system in which we are embedded. To subvert this “mythology” (i.e., ideology passing as natural, following Roland Barthes’s usage) is, likewise, a revolutionary tactic. A writer must reject false distinctions, illustrate the transitory nature of subjectivity, unsettle signification, and pull back the curtain on the artistic practice, all as a way to gesture toward the really real and, just as importantly, enact a possible alternative. Easier said than done. The cooptation, commodification, and otherwise deadening of art is a constant. In one brilliant moment in Homage to LeRoi Jones, however, young Acker reminds us of the uses of disruption, interrupting a letter and returning us all, as readers, back to the real world with this gleeful parenthetical: “(god Phil just called up the Guernica’s been defaced how wonderful I’ll be back)”.

This chapbook collects some early work from the Acker archive at the David M. Rubenstein Rare Books & Manuscript Library at Duke University, and should stand as the first of many “new,” posthumous collections of Acker’s work from that source. The archive houses, among other texts, some remarkable thoughts by Acker on an Andy Warhol retrospective and an important lecture she delivered on Wuthering Heights, Maurice Blanchot, and that “political tradition” in which she located her work. In Homage to LeRoi Jones we see the artist in search of that tradition, engaging particularly with the early work of Amiri Baraka (LeRoi Jones), particularly 1965’s A System of Dante’s Hell, exploring (and echoing) his critical rage, his engagement with musicality and raw sound, and his commitment to form as an expression of content and intent. Jones’s work serves Acker as something like a pattern and something like a sparring partner, as does the work of Alan Sondheim. Collected here are some of Acker’s letters to Sondheim, initiating a collaboration (a mutual, multi-media exchange of intimacies, “establishing complicated feedback relations”) which would become the 1974 film Blue Tape, wherein reading of passages printed here is coupled with sex acts and on-camera contestations over language and desire, authority and power.

One of the values of Homage to LeRoi Jones is that it serves as a portrait of a young artists in the process of becoming Kathy Acker. Her characteristic play of identy/ies; her articulation of vulnerability, desire, and the “need to scream”; her engagement with the sexual, ranging in mode from academic to erotic; and her driving concern with imagining a more ideal community than the broken society in which she struggles to survive—all these elements are here, voiced in an already recognizable style. Yet Acker is also just getting her sea legs in these pages, working sex shows in order to meet the droning demands of “the constant rent bill gas bill phone bill” and struggling to figure out how to balance what she later describes as the deconstructive versus the constructive. At one point, flailing a little, she offers a rambling but nonetheless insightful analysis of “the whole American marriage romantic monogamy romance” reading this myth as “upholding the general rich man’s economy” with its notion of individual ownership, male privilege, and the insistence on “rigid categories” for emotional experience, when, in reality “feelings . . . are so much more complex.” At another point, she launches forth from a Foucault-flavored examination of society (“I now want to find out who’s controlling me economically and why . . . ”) to a realm beyond rational language, entering the imagery of dreams and fairy tales. “I feel I’m going through a forest a thick forest blue black with low plants around the trees,” she writes, “I want to be more alive and happier, am scared what I’m doing here.” What immediacy, in that move from blue woods to the warped syntax of confusion—desire followed by fear and uncertainty, stitched together by that tenuous, collapsible “I.” Homage to LeRoi Jones gives us a glimpse of Acker figuring out what she’s doing here, developing her unique, immediate, political art.