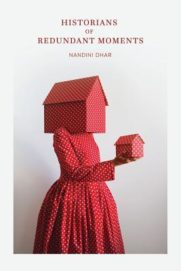 Nandini Dhar’s Historians of Redundant Moments has originality as its primary ingredient. The poems in this novel-in-verse will almost lead you to believe that the author exists in a world several silences away from the rest of the literary blocs. Take this line for example: “In Ghost Uncle’s eyes, shadows of mimeographer’s ink-heavy, dye-wet fingertips.”

Talking of silence, the opening poem of this book introduces the reader to a poet who is here to give voice to the silences before her: “A harmonium abandoned in the middle of an empty factory / cafeteria: a doll hanging by its head from the clothesline.” But why exactly are these silences (redundant moments) necessary to document, or historicize?

The answer to this is not far-fetched. These moments are important not just to the poet, but to her entire race. The unfortunate thing is that these moments have been made redundant by the historians who came before the poet, as one can see from poems like “No History Books Would Give Us these Stories”:

to peek in, breathe through the rustling stories.
Yes, there were trains without passengers. Yes,

there were nipple-tips without women. And,
we are gobbling up their rustling remains.

But that was a long time ago—a termite-eaten
photograph, a trivial anecdote

that refused to be translated into the language
of facts. We never learnt to cook

in our grandmother’s skillets. For there
were none. No famines.

No food riots. No rallies. No clandestine
meetings. No Slogans. No protests.

Similarly, it isn’t only public history that is redundant (silent) here. A whole bunch of private histories have been left long untold:

Mother goes around the house boxing things.
The attic is clustered with old junk that we

children are not allowed to touch—suitcases wrapped
in white sheets, each with a label. 1943.1948.YEH

around the house on tiptoe, brooms and rags in hand . . .

Indeed, as the book progresses, silence takes a different form, and becomes much more than redundant moment; rather, it begins to serve as a lens through which various events in the book come to the reader. “. . . princesses hardly / possess a line, do not swirl their canoes anywhere. / Do not have bows slung across their backs, do not / sharpen arrow-tips, let alone aim them anywhere.”

Dealing with a subject that has more to do with suspended actions than active ones, “with the heaviness of last night’s / rain in between our toes,” the author employs inventive use of sentences to construct strange but superb images, metaphors that bring about such actions or inactions:

Our grandfathers did not whittle this city into being. Nor
our fathers. Or uncles. Neither did the city write itself.

All our men could do was read it: an incomplete
tableau. Afraid their touch would shatter the city

like an old beetle wing. A broken line on a broken wall.

In all, Historians of Redundant Moments is much more than a work of reclamation. It is a book that dwells on love, family, trauma, joy, peace, and unrest, among others. It is thus safe to say that this book is a brilliant conglomeration of most of the things that make us human.