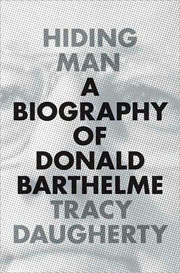 When hiring short-story author Donald Barthelme (1931–1989) for the managing editorship of Location magazine in 1962, art critic Thomas Hess advised his new employee, “The only adequate criticism of a work of art is another work of art”—wisdom that became Barthelme’s own literary battle cry. So Barthelme would undoubtedly be pleased with his first full-scale biography, Hiding Man, a genuine literary masterpiece penned by his former student, Tracy Daugherty. The volume, which is both a narrative of the writer’s life and an effort to situate his work within a larger literary landscape, promises to do for the legacy of its underappreciated subject what Raymond Weaver’s Herman Melville: Man, Mariner and Mystic did for Herman Melville and what Thomas Beer’s A Study in American Letters did for Stephen Crane. One cannot read this book without recognizing that Barthelme was the dominant writer of his generation or that Daugherty will be one of the leading literary biographers of his own.

From the publication of his first story collection, 1964’s Come Back, Dr. Caligari, to his premature death from poorly treated throat cancer, Barthelme served as the iconic father of the literary movement now known as American postmodernism. In doing so, he relied heavily on his knowledge of avant-garde movements in other fields. His father was a leading modernist architect and he spent much of his youth in Houston’s “black” jazz clubs, listening to musical innovators such as Lionel Hampton and Peck Kelley. He reviewed movies for the Houston Post. Later, Barthelme served as director of Houston’s Contemporary Arts Museum, where he became an intimate of Elaine de Kooning. These nonliterary forces played a significant role in the development of Barthelme’s own work, but it requires a scholar heavily versed in music, painting, and cinema to recognize the specific contributions. Daugherty, who clearly loves these creative forms as dearly as his mentor did, is an excellent tour guide for this cross-form journey. His reflections upon Barthelme’s influences, from Hemingway’s prose to Antonioni’s films, are gems of cultural criticism in their own right. Read alongside this biography, challenging Barthelme works like The Dead Father and “See the Moon?” become readily accessible.

If his wide knowledge of the creative arts inflected Barthelme’s work, the other inescapable through line of his life was his love of women. His four marriages, and numerous intermittent romances with such luminaries as author-activist Grace Paley and power agent Lynn Nesbit, form a compelling fugue that drives Daugherty’s tale. The personalities of his wives—the “imperious and inapproachable” Marilyn Marrs, “earth mother” Helen Moore, “ethereal” and “scary-fairy” Birgit Englund-Peterson, and “Goody Two-shoes” Marion Knox—make for vivid storytelling. What is most striking, however, is the tension between Barthelme’s conservative Catholic upbringing and his embrace of the liberated social and sexual mores of New York City’s Greenwich Village. Daugherty does a masterful job of evincing these tensions and showing how they manifest themselves in such definitive Barthelme works as Snow White and “Me and Miss Mandible.” He also offers an insightful and even-handed assessment of the accusations of sexism leveled against the International PEN Congress in 1986, an event Barthelme helped to organize, and that ultimately led to his break with Paley.

Yet Daugherty’s work is as much concerned with his subject’s artistic legacy as it is with his complex and turbulent life. The most visible part of Barthelme’s influence upon today’s literary landscape is the relentless support he displayed toward a generation of aspiring writers—from Paley, who likely would never have published her second collection without Barthelme’s urging, to the young Thomas Pynchon, who penned Gravity’s Rainbow while living rent-free in the basement of Barthelme’s 11th Street walk-up. Less recognized is the degree to which Barthelme influenced the New Yorker, itself the dominant literary publication of its era. Epic stylistic battles between Barthelme and his more conservative editors, Roger Angell and William Shawn, helped to open that magazine’s doors to a generation of writers whose sensibilities extended beyond Joseph Mitchell’s verbal portraits and John Cheever’s suburban send-ups. (Barthelme won many of these skirmishes, although not his perennial struggle against the mandatory “serial comma” that defined Shawn’s editorship.) In fact, Barthelme proved so influential at the peak of his career that pranksters published stories under Barthelme’s name in several leading literary journals, including the Georgia Review, forcing the befuddled author to pen a rebuttal to the New York Review of Books, in which he denied responsibility for these pastiches.

One of the major features of Barthelme’s prose was the unabashed use of time-sensitive materials in his writing, a choice that Daugherty recognizes as risky:

If a sculptor places a metal pipe in the center of his piece and then it tarnishes over time, darkening, flaking, the new hue and texture will alter the entire structure, and will change the viewer’s response. The trick is to choose materials that will change in interesting ways, but this is difficult to predict.

This grounding in a specific cultural moment adds to the emotional power of Barthelme’s work, but it also may explain why his reputation has waned. It has become something of a convention among scholars of the American short story to compare Barthelme’s legacy with that of Raymond Carver (1938–1988), the blue-collar realist who also died in his prime. Daugherty makes a concession to this mania, noting “Don had been the most imitated short story writer in the United States in the late 1960s and early 1970s. Raymond Carver could now [in the 1980s] claim that distinction.” At the same time, the biographer does not devote much time to this rather fruitless comparison—which, considering the decidedly different artistic projects embraced by these authors, is no more productive than comparing the legacies of Robert Frost and Sylvia Plath. Daugherty takes us beyond this hollow paradigm of postmodernism versus minimalist realism. Moreover, he appears to believe that Barthelme’s reputation will see a resurgence, as the time is ripe for what Lois Zamora has called a “critical repositioning” of the Barthelme corpus.

During the late 1970s, critics Josephine Hendin and Gore Vidal spearheaded a determined rejection of Barthelme and his aesthetic, which John Gardner’s On Moral Fiction (1978) went on to describe as “enfeebled.” The reviews of Barthelme’s final collection published during his lifetime, Overnight to Many Distant Cities (1983), proved outright damning. Jonathan Penner’s Washington Post attack was all too representative. According to Penner, the volume “repels any understanding whatsoever” and “What this book says is that nothing can be said . . . . Life means nothing, art is false.” Yet Barthelme’s clever use of wordplay and lyrical rhythms, his emphasis on irony and humor, and his willingness to break rules for the sake of truth are the hallmarks of much of contemporary short fiction. Furthermore, his insistence that characters have rich internal lives, reflecting authentic patterns of psychological development, is as important a component of any twenty-first-century story as the vivid external panoramas drawn by the realists of the 1980s. Barthelme’s impact can be seen in the writings of such rising masters as Kevin Brockmeier, Dan Chaon, Roy Kesey, Karen Russell, and Wells Tower. Daugherty points out that, “Of the twenty-two pieces in the annual O. Henry Prize Stories published just before [Barthelme’s] Sixty Stories appeared [1981], all were ‘realistic’”—and most were defined by “minimalism.” In contrast, only a handful of the stories in this year’s O. Henry Prize collection could be described as pure realism, and none are even remotely minimalistic. This belies the widely accepted historical narrative in which Barthelme’s postmodernism fought a word-to-word battle royal against the minimalist realism of Raymond Carver and Bobbie Ann Mason, and lost. Rather, today’s best short fiction is a hybrid of the postmodernism of the 1970s, the realism of the 1980s, and the magical realism of figures like Robert Olen Butler that dominated the form during the 1990s.

Daugherty’s treatment of Barthelme’s career is comprehensive and definitive. (The only item missing from the work is any discussion of the 1986 attack on news anchor Dan Rather, which—in one of cultural journalism’s stranger salvos—Harper’s writer Paul Limbert Allman has accused Barthelme of orchestrating.) One turns the final page of Hiding Man convinced that Donald Barthelme was the most important and distinctive writer of his age. Daugherty makes a compelling case that he is also the most influential unread author in United States history. Undoubtedly, when Barthelme assumes his rightful place at the forefront of the American literary canon, Daugherty’s beautifully crafted tribute will be remembered as the original source of this much-needed and long-deserved rehabilitation.