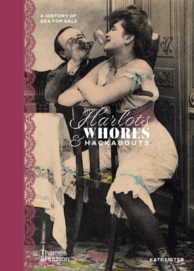 The year was 1881 and teenager Elizabeth Burley had just leapt into the icy waters off the coast of Dover. Though an act of desperation, this was no suicide attempt—she flung herself off the Granville Dock to evade a pair of men who chased her with the clear intent to violate the agency and safety of her body. There was no point in calling for the police; they were the police. Suspected of being a "fallen woman" under the provision of the Contagious Diseases Act, she was to be subjected to a forcible vaginal examination for signs of sexually transmitted diseases; only seventeen years old, she took her chances with the Channel rather than face such invasion. It worked, because after seeing her go into waters cold enough to freeze her to death if she didn't drown first, the pursuing officers went on their way.

This is just one of the many stories in Harlots, Whores & Hackabouts, Kate Lister's five-thousand-year history of sex workers and the efforts to control, coerce, and abolish them. In her scholarship, Lister puts the empirical reality of sex workers front and center, debunking centuries of effort to cast them as vectors of disease, strife, and immorality, while also not playing into the other side of that coin, painting them as victims of vice in need of salvation.

Beginning with accounts of transactional sex in the Epic of Gilgamesh, the book covers a global range of cultures from the flower boats of China to the molly houses of London as it progresses toward the present day. Patterns emerge, and history shows itself to repeat as concurrently as it does consecutively. Although it takes different forms, the most prevalent strategy since the courtesan Phryne stood before the judges of Athens has been an attempt to find and enforce the right level of desperation. As the book documents, this strategy never works; it only pushes the trade into areas more dangerous and unpredictable for the workers themselves.

It's a disturbing history, but also a fascinating one. And it's a history beyond what many might assume, one of gay men and trans women, of artists and immigrants. Historical figures pop up in unexpected roles throughout. Lushly illustrated with photographs and artwork, Harlots, Whores & Hackabouts honors this history in its visuals and its design as well as its content. A significant effort is made to apply the names of sex workers to their images whenever possible, restoring humanity to people often labeled only as "a courtesan" or "prostitutes" in history books’ captions.

One of the most prominent revelations in this book is how much sex work has been suppressed from the documentation of history itself. Far from being a temporary aberration of social values, sex work is instead revealed as ever-present in the cultures we think we know. It's not a glossy romanticization, either; the book doesn't shy from portraying honestly the dangers and discomforts of those for whom sex work is their life’s work. In this, it is also a labor history, and a history of the devaluing of women's lives. Sex work is work, but work made unsafe by the design of those who would control it.

This design nearly killed Elizabeth Burley before her eighteenth birthday, but in the last hundred years it has come under greater opposition than ever before. The act that authorized the pursuit of young Burley in the first place was vehemently opposed by Christian philanthropist Josephine Butler, who considered the regulatory legislation "surgical rape." Butler was one of the first major advocates for sex workers in the modern age, writing and campaigning on behalf of their rights, dignity, and agency. Butler's efforts would be followed by sex workers confronting clergy in the streets, occupying churches, fist-fighting cops, and organizing for advocacy and self-defense—a struggle for worker rights that is far from over.