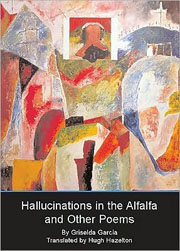 English-speaking readers may not have yet heard of Griselda Garcia, but as the introduction to this bilingual edition informs us, she is “one of the principal figures of a young generation of Argentine poets.” Born in 1979, “around the time of the military dictatorship,” she exemplifies a style that is “ironic, sensual and instinctively surrealistic, yet undercut with an anguished, tenacious courage.” To date she has published seven collections of poetry, four of which—Hallucinations in the Alfalfa (2000), The Art of Falling (2001), The Route of the Spiders (2005) and All I Want is Your Blood (2004)—are represented in this collection. As translator Hugh Hazelton points out, each of the included selections “uses a different form and structure to develop a distinct set of themes,” making Garcia worthy of serious consideration despite her young age.

Hallucinations in the Alfalfa opens with an epigraph by Fernando Pessoa, the experimental Portuguese poet, though Garcia opens this poem with the softer Spanish form of Surrealism popularized by Lorca:

The reader may wonder whether they are being prepared for a trip into the magic realism of Gabriel Garcia Marquez, though in the next section, Garcia’s use of backslashes creates a harder tone:

Do these backslashes reflect an indecision on where to break the line? By the next section they are gone, leaving us without answer—but then a new type of violence enters: “we make a deal that once we’re sick of each other / we’ll make necklaces out of our teeth // and bedspreads from our skins.” The poem ends, over twenty pages later, with the bold assertion that “intuition will guide our souls / on vast extensions of salt water.” It’s an ending that bespeaks its South American origins; the idea of “souls” has little place these days in the North American poetic lexicon.

The Art of Falling is also prefaced by a Pessoa epigraph. This series of poems begins with “Ode to Self-Destruction” which brings to mind, through the insistence of the word “tonight” that begins each stanza, one of the most famous poems of the 20th century, Lorca’s “Lament for Ingnacio Sánchez Mejias,” with its famous refrain “at five in the afternoon”—although, in Lorca’s poem, the refrain haunts the piece in the way the snare haunts Ravel’s “Bolero,” while here “tonight” is more like the boom of the tympani. Garcia’s ode to the boredom of being alone ends:

And tonight the dogs don’t bark,
and I break the sluices of sanity
and suffer an orgasm
and enjoy the pain
and sink down deeper and deeper
while praying for someone to come in time
to rescue me from myself.

All I Want is Your Blood, a multi-part poem, marks a return to Surrealism, but this time to the darker French tones. In Part IV we read:

Do we see the slicing of the eyeball from Un Chien Andalou reflected in these words? Even though it was Luis Buñuel and Salvador Dali, two Spaniards, who created that iconic moment, they did so while living in France under the influence of André Breton.

Finally, The Route of the Spiders shows Garcia exploring a new direction of language. In “Death in Summer,” we find “Delights of the glans / like a pale strawberry / at the tongue’s party.” “Windstorm” ends equally enigmatically: “After the sowing there will be no rest: / I will bleed / and a whole harvest will be ruined.”

Griselda Garcia is a voice from the South well worth reading, and this meaty offering presents her work with the respect due a powerful poet.